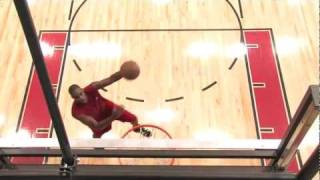 Eric Weiss
@DraftExpress
Overview: Drafted in 1998 by Toronto and swapped for ex-teammate Vince Carter on draft night. Jamison went on to become a 2-time All Star for the Washington Wizards. Jamison came into the league as an undersized PF with limited perimeter shooting ability and has developed into a hybrid forward with range out to the 3-point line.

Strengths: Jamison is one of the most creative finishers around the rim in the NBA. He has an assortment of finger rolls, floaters, and runners off the dribble that make him nearly impossible to defend once he's turned the corner. Jamison's back-to-basket game is also extremely effective, especially considering his diminutive size as a power forward. Though he's developed into a very solid featured offensive option, Jamison remains one of the more productive player's off-ball. He has a knack for creating offense off of transition, cuts, and offensive rebounds, making it easier to run plays for other members of the team. He's an incredibly versatile player, which allows him to exploit a large variety of mismatches as they appear on the floor. He's a prolific, and quite underrated scorer. He also has a superb feel for the game and rarely turns the ball over. Defensively, Jamison does a very solid job against the face-up power forwards that are starting to dominate the position.

Weaknesses: Jamison is a very capable scorer and rebounder, but he's never been regarded as a franchise player. A pretty complete offensive player overall, Jamison doesn't have a great left hand has trouble finishing that direction. Jamison is versatile defensively because of his size and athleticism, but he's not considered a great defender on the perimeter or in the post. Against pure post forwards Jamison has trouble denying position and can't effectively challenge shots. His defense against small forwards is average and limited mostly to other hybrid forwards.
Read full article