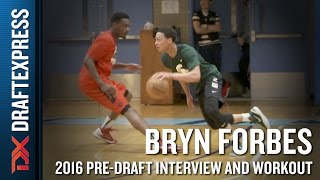 The Top Five Performers at the 2016 Utah Summer League

Forbes, the four year college player out of Michigan State rounds out this top five as the lone rookie. Forbes' college career began at Cleveland State where he played his freshman and sophomore year, before finishing as an integral rotation player for Tom Izzo's Spartans. Forbes' calling card is as a volume 3-point shooter, having finished seventh in the NCAA last season in 3-pointers made, at an average of 3.2 per game. Forbes has shot the ball well so far this spring/summer at Portsmouth and in Utah, showing an adeptness in navigating screens and spotting up off the ball. He is an undersized shooting guard at 6'3, and although he is an adequate ball handler he is not really a playmaker for others as his primary purpose when he is on the floor is to score the ball as showcased by his zero total assists in three games in Utah. Forbes may be able to operate as a backup facilitator in a pinch at the pro level, but he'll need to show some improvement in that aspect of the game in order to stick on the floor as an undersized guard. He has a skill that clearly translates to the pro level, and it will be interesting to see how far that skill can take him.
Read full article

DraftExpress
@DraftExpress
-Speaking of Michigan State upperclassmen, Bryn Forbes measured 6'3 with a 190-pound frame and a 6'5 wingspan. He lacks a degree of size and length for a shooting guard, but led the PIT in per-minute scoring doing what he does best, shooting the 3 (4.3 makes over 10 attempts per game, 43% 3P%). Few players in the country have been as deadly from the perimeter as Forbes in recent seasons, and though he has limited experience running an offense, it will be interesting to see how teams value his sensational shooting ability (48% 3P% as a senior) in the draft process given the direction the league is headed.
Read full article