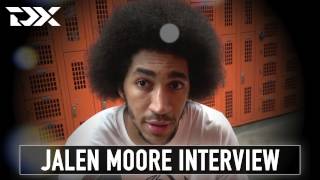 Jalen Moore played a small role during his freshman season at Utah State, seeing only 17.5 minutes per night mostly coming off the bench. While Moore averaged only 5.5 points per contest, he did show a deft shooting touch and an ability to be an efficient off the ball contributor for the Aggies.

Moore made a huge jump during his sophomore season, a much-needed progression for a Utah State team that lost their three leading scorers  Jarred Shaw, Spencer Butterfield, and Preston Medlin to graduation. Moore increased his scoring average to 15.2 points per game as a sophomore, while maintaining his excellent efficiency on the perimeter (39.1% on 115 attempts) despite the increased usage.

That perimeter shooting still forms the core of Moore's offensive game. Synergy logs Moore as having shot 39% on jump shots overall, with an excellent 41.9% on catch and shoot opportunities. That catch and shoot role is where Moore is most comfortable, as he does an excellent job with his footwork and can get his shot off quickly, while his form, although perhaps having a little bit of a flair in his non-shooting elbow from time to time, is mostly repeatable and consistent.

Another area where Moore shows ability is as a shooter coming off of screens. Moore does a good job of using picks to free himself from his defender, and has good balance to get the ball up quickly before the defense is able to rotate. This is something that he didn't really show much of during his limited time as a freshman, and being more than just a set shooter is an important development in his game.

Shooting off the dribble comes a little bit more inconsistently for Moore. He does show the ability to use one or two dribbles to set up a jumper, usually the result of a defender closing out and biting on his strong pump fake. He doesn't show a whole lot of confidence pulling up off of dribble drives or shooting when coming off of a pick, though, something which he would benefit greatly from.

Moore also contributes in two other off-the-ball areas: cutting to the hoop and pushing the ball in transition. As Utah State's leading defensive rebounder, Moore did a good job pushing the ball in transition and making good decisions with the ball, maintaining an excellent 4-to-1 assist-to-turnover ratio on the fast break, according to Synergy Sports Technology. He also does a good job of moving off the ball and finding weak points in the opposing team's defense, another good attribute for a Utah State team that went up against a fair amount of zone defenses last year.

Where Moore struggles is creating off the dribble. He's not an explosive athlete, nor is he quick with the ball in his hands, and he doesn't have advanced ball handling moves to compensate. He does have nice touch on a floater in the lane, but overall he's not going to generate very much offense in the half court, either for himself or for his teammates. Improving his ball handling, getting more comfortable shooting coming off of picks, and using that attention to get more looks in the lane will be key for Moore going forward.

On the defensive side of the court, Moore is held back by average physical tools. He spends the majority of the time playing power forward for the Aggies, and he doesn't have the lower body strength to really do that effectively, and struggles to hold his ground down low. Considering he played so much of his time at the power forward position, his averages of 1.4 offensive and 6.5 defensive rebounds per 40 minutes, pace adjusted, were well below average, and contributed to Utah State's struggles on the glass.

Moore should project better as a defender when he makes his transition to the perimeter, as he has good length for the small forward positions, but his average lateral mobility may hold him back from being a true 3-and-D candidate.

Moore played a much bigger role for the Aggies during his sophomore season than he did as a freshman, and his ability to maintain his efficiency while playing that increased role was a very positive takeaway. Still, it would be nice to see Moore expand his skill set just a bit by adding more ball handling moves, an increased ability to shoot off the dribble, and by continuing to fill out his frame. While more playing so much of his time at the power forward spot makes it tougher to gauge his true defensive potential, his shooting will keep teams interested as he rounds out the rest of his game.
Read full article