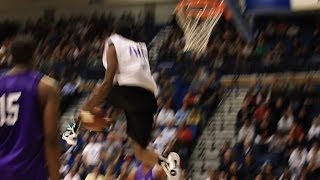 Joseph Treutlein
@DraftExpress
Simply a role player on last year's Sweet Sixteen bound Western Kentucky squad, there will be added pressure placed on Evans with the graduation of Courtney Lee and Tyrone Brazelton. Given the substantial amount of scoring that the Hiltoppers lost, there will be plenty of opportunity for this junior to boost the 5.9 point per game average he put up last season.

Evans certainly fits the mold of a long-term NBA prospect physically, standing a legit 69 with an enormous wingspan. At only 190 pounds, he definitely will need to bulk up before he hits the next level, and although his frame is a bit narrow, he could likely get up to 220 pounds or so by the time it is all said and done. In terms of running the floor, Evans gets up and down the court very well and shows a great motor, despite his lack of strength.

The bulk of Jeremys scoring is done within five feet of the basket, usually off of an offensive rebound or some sort of drop-off pass. Having good hands and great athleticism allows him to catch and finish against most players in his conference with no problems whatsoever. The Arkansas native seems to have a knack for finding himself in the right place at the right time, which might explain why he shot 62.5% from the field as a junior.

Likewise, Evans is still incredibly raw in virtually every facet of creating his own shot. He appears incredibly uncomfortable shooting the ball from the perimeter, hesitating as if he needs to ask permission before launching one up. Evans shoots a slower set shot, but actually shoots it with decent accuracy when he has the confidence to put it up. We didnt see him put the ball on the floor one time and try to create for himself, and considering his limited skill-level offensively, its likely that this is out his repertoire.

There is much potential for Evans on the defensive end. Already a solid shot blocker, he primarily relies on his athleticism and length to block shots rather than actually learning the craft. He has shown the ability to contain face the basket power forwards by keeping in front of them laterally, but struggles holding post position inside. Evans tends to play awfully upright, establishing basically no center of gravity and allowing him to get knocked off balance quite easily. Similar to his shot blocking skills, his rebounding ability is also completely reliant upon his natural gifts, rather than fundamental boxing out and attacking the ball.

It is quite rare that you find a player with Evans size and length in the Sun Belt, so he will definitely be a name keep an eye on down the road. Only entering his junior season, he still has two years left to continue to fill out physically and polish up his skill-set. Whether he will ever develop on the offensive end is yet to be seen, but he is a player who could certainly receive an invite to Portsmouth and possibly more if he is able to continue to develop.
Read full article