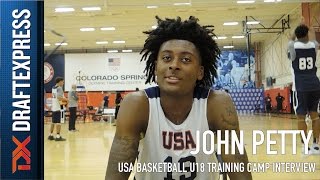 Strengths
-Nice size and frame for a wing at 6' 6, 190 pounds.
-Good leaper who can play above the rim in space. Best off of two feet. Catches lobs in transition.
-Very good defender both on and off the ball. Quick feet. Makes an effort to slide and contest. Has the size to contain penetration. Active off ball defender. 1.7 steals and 1.0 blocks per 40 minutes in 20 Nike EYBL games. Competitive.
-Solid spot up shooter who displays sound mechanics. Catches on the hop, on balance, elevates. Shows potential as a pull up shooter with one-dribble pull ups. 35% from three on 157 attempts in 25 EYBL games.
-Can attack a closeout or straight line drive from the perimeter. Solid first step. 20.5 points per 40 in Nike EYBL.
-Good passer with a nice feel for the game. Plays within himself for the most part. Can drive and kick or dish. Makes some instinctual passes.
-Crashes the offensive glass. Does a lot of little things that translate well to being a role player at the NBA level.

Weaknesses
-Good not great length relative to his height  6' 8 wingspan
-Not much of a shot creator at this stage. Limited to mostly straight line drives. Doesn't change speeds or directions with advanced dribble moves. Struggles to create space to get to his pull up jumper.
-Streaky shooter who is best with his feet set in spot up situations. Reliant on elevation, doesn't always release at the top of his jump. Not as effective if he doesn't catch in rhythm. Ball doesn't always come out cleanly.
-Good athlete with nice size but can improve his craft around the rim  47.3% from two in Nike EYBL.
-Has the game of a small forward, but the size and length of a traditional two-guard. Lacks a degree of offensive versatility.

Outlook The Huntsville, AL native impressed with his size, athleticism, defensive competitiveness, shot making ability and willingness to operate within a role. Petty isn't the most dynamic prospect as he doesn't have much off the dribble game, and isn't overly versatile, but he most certainly has all of the ingredients of a high-level role player who can play both ends of the floor. Wherever Petty commits, he should be able to contribute early on and figures to work his way onto the NBA radar as his game grows.