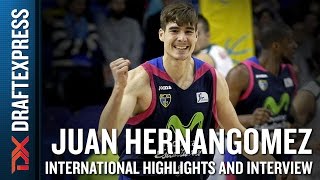 Mike Schmitz
@Mike_Schmitz
Halfway through the ACB regular season, it's safe to say that 20-year old Juan Hernangomez (also called Juancho Hernangomez) has been the revelation of the Spanish league thus far. The 6'9 face-up power forward is putting up historic numbers with Estudiantes for a player his age. His 11.3 points ranks as the highest per game scoring average for a player under 21 since Rudy Fernandez's 13.7 ten years ago. Additionally, his 20.6 PER ranks is second best in the last decade as well (behind Nikola Mirotic), eclipsing some big names (Ricky Rubio, Tiago Splitter, Serge Ibaka, Kristaps Porzingis, Ersan Ilyasova, and his older brother Guillermo/Willy [drafted by the Knicks last June]) in the process so far.

The intrigue around Hernangomez begins with his productivity playing at the highest level of European basketball, but continues with his strong physical attributes. Standing 6'9, he has ample height for a NBA power forward, and combines that with a good frame that should continue to fill out, a long wingspan (appearing to be somewhere in the 7-foot territory), and solid athletic ability. He is a fluid athlete who plays above the rim with ease, is very light on his feet, and runs the floor with impressive speed.

Offensively, Hernangomez gets his production in a variety of different ways, be it as a spot-up shooter, as a cutter/pick and roll finisher, crashing the offensive glass, or running the floor in transition. His offensive versatility hints at being able to play both forward spots down the road, which is a highly coveted skill in the NBA at this point in time.

He's improved his perimeter shooting this season, upping his 3P% from 25% in the ACB last year to 34% thus far in 2015/2016. While he hasn't always been the most consistent shooter historically, he shows fairly fluid, consistent mechanics with a high release point, and nice balance in his lower body, which has helped him see increasingly better results.

Hernangomez also shows a nice first step and is capable of attacking closeouts driving in either direction. He's an aggressive player who regularly makes decisive cuts or drives to the paint and will finish strong at the basket once there, often through contact, which, along with his ability to run the floor, helps explain his excellent 2P% (58%) and the impressive way he's been able to get to the free throw line this season (7 attempts per-40 minutes, 78% conversion rate).

Hernangomez's athleticism, length, toughness and intensity are all reflected in the way he competes on the glass, as he's one of just a handful of players under the age of 21 to average over 10 rebounds per-40 minutes in the ACB in the past 25+ years. He plays with a real edge to him, regularly going out of his area on both ends of the floor. His motor and ability to do the little things will likely help keep him on the floor even when his shot isn't falling.

The hyperactive energy level Hernangomez displays at times does come with somewhat of a cost though. He tends to try to do a little too much at times offensively, posting just 32 career assists in nearly 1200 minutes (one every 37 minutes), even if he's clearly not a selfish player and will occasionally surprise you with some really creative passes, his decision making skills could use some work.

As competitive, engaged and fiery as Hernangomez is, the place where his youth shows up most vividly right now is defensively. He regularly gets taken advantage of by the significantly older and more physically mature players he encounters every single game playing in the very physical ACB, as he doesn't have standout height nor strength for a power forward at this stage. He struggles to step out on the perimeter as well, as he doesn't always get in a low defensive stance, and has some issues staying in front of quicker opponents who tend to drive right by him.

While his energy level is excellent, and he likely has the tools to develop into a very solid defender as he gains experience, he tends to gamble a little too much right now, biting on fakes, trying to reach for steals, and generally playing with a reckless abandon.

Becoming a more consistent shooter will be a major key for Hernangomez's ability to carve out a role in the NBA. Right now he is a career 40/118 (33.8%) 3-point shooter, which is promising, but will need to continue to improve. His tendency to shoot the ball from the side of his face, with a bit of side spin, makes for some bad left/right misses, and he is pretty much exclusively a spot-up shooter at the moment, almost never attempting any off the dribble jumpers. Part of that is due to his ball-handling ability, which is also somewhat unrefined.

After playing 10 minutes per game last season, Hernangomez is up to 25 minutes per contest this year, which is fairly impressive considering he just turned 20 a little over three months ago. While the fact that his team is in last place in the league certainly contributes to that (and his head coach being fired today may change his role somewhat), there is very little doubt that he is one of the most productive players in the league at his position.

A free agent this summer, Hernangomez could very well decide to come straight to the NBA depending on how high he's picked this upcoming June. It's becoming increasingly difficult for NBA teams to find players with the type of size, motor and skill-set he shows at the 4/3 position, and his style of play makes it fairly easy to slot him into a role in the NBA. Expect to start hearing his name a lot more now in other places.
Read full article