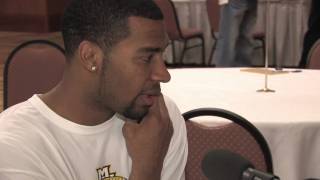 After a solid junior campaign, playing alongside the likes of Jerel McNeal, Dominic James, and Wesley Matthews, Lazar Hayward emerged from their collective shadow as Marquettes top option this season. Playing out of position (at the 4 or even sometimes the 5) in the Golden Eagles extremely undersized lineup, Hayward showed the competitiveness and toughness that coaches love, but remains notably limited in certain areas.

Possessing solid size and strength for a small forward the position hell need to play on the NBA levelHayward is a physical wing who had success in the NCAA thanks his aggressiveness and role-player skills, not his athleticism. Not terribly quick, looking a little stiff in the open floor for a wing, and not displaying much in the way of explosive leaping ability, Hayward is a limited athlete by NBA standards a reality that will constantly force him to prove himself against his more athletic peers.

Though his athletic profile unquestionably limits his upside from an NBA perspective, it is hard not to like the way Hayward approaches the game on both ends. Hard-nosed, confident, and unwavering, Hayward has been a consummate team player at Marquette from the moment he stepped on campus. Though he received more touches this season, and subsequently wasnt as efficient as hes been in the past, the composition of Haywards offensive game has been consistent for most of his career.

Nearly half of Haywards offensive is composed of jump shots according to Synergy Sports Technology, and while he didnt shoot the outstanding 45% from three that he did as a sophomore, Hayward remains a capable catch and shoot threat. Though he short arms his release on occasion, the senior does a nice job squaring up his body and knocking down his open looks. With roughly a third of his shots coming from behind the arc in each of his seasons at Marquette, Haywards ability to stretch the floor has always benefitted the guards playing around him.

While his 36.5% shooting in catch and shoot situations is a 4% drop from last season, much of that has to do with the quality of those shots rather than Haywards shooting itself. Last season, nearly 71% of such shots were categorized as unguarded, while only 38% have been categorized similarly this season. Clearly, Haywards efficiency as a shooter has a lot to do with his teammates, as hes seldom creating his own shots. Only taking roughly 1 pull-up jump shot each game and knocking down only 22.9%, Hayward isnt much of a midrange threat due to his inability to create space off the dribble and tendency to float through his release instead of jumping straight up and down off the dribble. Right now he projects as almost strictly a spot-up threat.

Aside from his merits as a jump shooter, Hayward also proves to more than capable of scoring in the post and around the basket. Though he lacks great leaping ability, the New York native does an excellent job using his body to attack the baseline off the dribble in face-up situations and to protect the ball when he elevates to score.

Haywards spot up shooting, face up game, and ability to play tough around the basket all speak to his ability to flourish as a role-player. Doing all of the little things, rebounding the ball at a high rate, and playing a fundamental brand of defense, Hayward thrives as a complementary option. Though he had a productive season as Marquettes leading scorer, his reliance on his teammates for efficiency, lack of dynamic ball-handling and shot creating ability, and his role in half court sets are emblematic of his ideal fit at the next level.

Haywards dedication and ability on the defensive end are unquestionable, but his potential from an NBA perspective remains problematic. Using his body just as well defensively as he does offensively, Hayward does a very good job getting a hand in the face of shooters when closing out, fighting for position against much bigger players on the block, and holding his ground when his man tries to take him off the dribble.

Extremely sound fundamentally, obviously well-coached, and showing a knack for being in the right place at the right time, the biggest concern about Haywards defensive potential is his lack of lateral quickness. Spending most of his time defending fours and fives last season, Haywards ability to deny dribble penetration will be one of the key aspects of his game that teams judge in workouts.

With the Portsmouth Invitational only a few weeks away, Lazar Hayward is the type of player that would surely benefit from a good showing, especially if he can showcase his defensive ability against a collection of better athletes on the wing. A known commodity at this juncture, the holes in Haywards game may not guarantee him a spot on draft night, but he will at the very least have his suitors in the form of training camp invites and overseas offers.
Read full article

Joey Whelan
@DraftExpress
When reeling off the NBA draft prospects playing at Marquette University, very few would expect the list to go beyond the names Dominic James and Jerel McNeal. But lo and behold, it was Lazar Hayward the player that led the team in per-minute scoring last season, while shooting a very efficient 47% from the field and 45% from beyond the arc. He was also the teams leading rebounder, and still has two years of eligibility left to continue to improve upon his play.

The 6-6 combo forward is a player with very specific strengths, and can be described as a consummate role player on this Marquette team. He gets most of his offense spotting up for jump shots from the perimeter, but can also do some damage cutting off the ball, running the floor in transition, grabbing offensive rebounds, or even posting up inside. Not a player who can be expected to create much offense on his own, he greatly benefits from having two excellent slashers/shot-creators next to him in James and McNeal.

Haywards main virtue at the moment would likely be considered his jump-shot. He has very nice shooting mechanics and a fairly quick release, which coupled with his excellent shot-selection, make him a very efficient option spotting up from the perimeter. Hayward is mostly a catch and shoot player with his feet set, losing significant accuracy when forced to pull-up off the dribble. According to Synergy Sports Technologys quantified report, he made 41/87 (47%) of his catch and shoot jumpers last year, as opposed to 8/27 (30%) of his off the dribble shots.

As a ball-handler, Hayward is similarly limited. He possesses just adequate ability to put the ball on the floor in a straight line with his right hand, while his ball-handling skills with his left hand are near non-existent. Fairly limited athletically, he cannot be relied upon to create his own shot, and thus needs to have strong ball-handlers alongside him who can pick apart the defense and get him open looks. Hes not terribly explosive either, which makes it difficult for him to finish in traffic around the rim.

Hayward regardless manages to get to the free throw line at a pretty good rate, thanks mostly to his toughness and aggressiveness posting up, grabbing offensive rebounds and making strong moves off the ball for simple catch and finish plays. The physical nature of his game and the intensity level in which he plays with helps compensate for many of his shortcomingsa big reason why he is such a good rebounder despite standing just 6-6.

Defensively, there are some question marks that linger as it pertains to the pro level. On one hand, he is a very competitive and fundamentally sound defender, working extremely hard to keep his man in front of him and contest shots, even on the perimeter. On the other, he plays almost exclusively at the power forward position for Marquette, and seems to lack a degree of lateral quickness to make the transition to the 2/3 (where his size indicates hell have to play) more plausible. Its possible that Hayward can show potential as a strong perimeter defender over timethis is something well have to keep an eye on when he eventually moves down a spot and begins playing the small forward position more frequently.

If Hayward is going to get some looks from NBA teams after the end of his senior season, its going to be in the role of a James Posey type specialista lock-down defender and accurate 3-point shooter with his feet set. Those are probably the things that he should be working on the most, but it wouldnt hurt to become a slightly more versatile player as well, which means improving his ball-handling and especially his passing skills (he sports an awful 1 to 3 assist to turnover ratio). It will be interesting to see how he looks once James and McNeal are gone next season.
Read full article