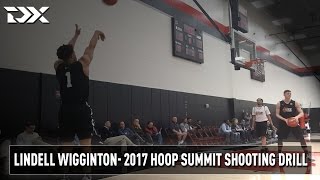 Strengths
-Impressive athlete. Quick, shifty and explosive. Can play above the rim off one or two feet.
-Very good in the open floor. Tough to stop with a head of steam. Puts pressure on the defense with his ability to push in transition
-Rhythm shooter with a good looking stroke from a mechanical perspective. Could develop into a decent shooter in time. Gets great rise on his jumper, helping him get his shot off against bigger defenders
-Doesn't need a screen to beat opponents off the bounce. Impressive speed attacking closeouts. Can create high percentage looks out of isolation situations by virtue of his quick first step
-Tough guard who isn't afraid of contact. Has a no-frills style of play. Will likely live in the paint and at the free throw line at the college level
-Quick feet defensively. Can heat up the ball and slide his feet
-Appears to have strong intangibles. Has some leadership skills. Well spoken. Knows who he is as a player

Weaknesses
-Has just an average combination of size (6'2 ¼ in shoes), length (6'3 ½) and strength (186 pounds) from an NBA perspective.
-Creates plenty of high percentage shots inside the paint, but doesn't always know how to finish the looks he generates for himself. Tends to drive right into traffic without a plan. Lack of length and just-decent frame limits his ability to finish among the trees
-Drives primarily looking to score. Doesn't have great vision on the move. Can get turnover prone. Needs to improve his decision making and playmaking ability in the half-court, especially out of the pick and roll
-Streaky shooter at this stage. Doesn't always shoot the ball the same way. Tends to jump way forward at times, or releases on his way down

Outlook Wigginton appeared to be the most polished and productive of the four Canadian guards in attendance from the start, even if he doesn't share the same long-term upside. His athleticism, toughness and scoring instincts makes him a great candidate to have a strong career at Iowa State. He'll have to become a better shooter, finisher and playmaker to emerge as a serious NBA prospect, but absolutely has the tools to do so and impressed with what he showed in the week of practices leading up to the game.
Read full article

Bogdan Karaicic
@bhoops2016
Canadian point guard Lindel Wigginton goes around the key in a Nike Hoop Summit shooting drill. Wigginton was the star of last night's scrimmage, attacking the rim relentlessly in both the open floor and half-court, taking contact around the basket, and even knocking down some off the dribble jump-shots. His athleticism and toughness has proven to be a key component of the Nike Hoop Summit World Select Team, and he will undoubtedly play an influential role in the outcome of the game on Friday.
Read full article

DraftExpress
@DraftExpress
The second most explosive player in attendance behind Richards registering a 29.5 inch standing vertical leap, Oak Hill Academy's Lindell Wigginton otherwise measured as expected.  He has good size and toughness for a lead guard which should serve him well as he looks to earn early playing time for Steve Prohm's Iowa State Cyclones.
Read full article

Strengths
-Good size for a point guard at around 6'2. Strong frame
-Shifty athlete with an extra gear he can get to. Can play above the rim at times
-Shows nice potential as a shot-creator. Has a strong first step. Plays low to the ground and has a variety of ball-handling moves and change of speeds he can utilize to get to the basket. Will execute spin moves with strong body control
-Very aggressive taking the ball to the rim. Doesn't shy away from contact. Gets to the free throw line at a good clip.
-Can create for his teammates as well as himself, particularly in drive and dish situations. Has some creativity to his game
-Will knock down an occasional jump-shot, especially when he sets his feet and is on balance.
-Competes on defense. Has good lateral quickness.
Weaknesses
-Decision making skills can be very poor. Still figuring out how to use his tools effectively in a consistent fashion. Turns the ball over at a very high rate.
-Streaky shooter who shoots the ball differently seemingly every time. Sometimes jumps too far forward or high in the air and relesaes the ball on the way down. Ball comes out of palm in others. Made just 3/11 free throws in Treviso and is a career 60% from the line in 25 games in our database.

Outlook Canadian point guard from Halifax (Nova Scotia) who played just 14 minutes per game at the EuroCamp behind highly touted UCLA commit Jaylen Hands. Was able to show his athleticism and talent as a shot-creator. Has a lot of tools to work with and looks like an intruguing long-term prospect. Still figuring out how to put them all together and be more consistent with his approach. Somewhat of a late bloomer, has been on the radar quite a bit lately with Oak Hill Academy and was invited to the NBA Basketball Without Borders Global Camp in Toronto last February. Earned his first invite to the Canadian national team recently to compete with the U18 squad at the FIBA Americas Championship in July.
Read full article