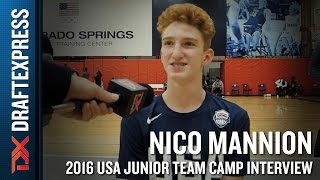 Matt Williams
@DraftExpress
The son of former NBA player Pace Mannion, who was listed at 6'7-190 pounds, Nico Mannion measured roughly the same marks as he did last summer at 6'1.5 in shoes with a 6'1.25 wingspan and a 165-pound frame. Given his father's size, it will be interesting to see how Mannion's frame matures in the coming years. He's already been productive playing with the Earl Watson Elite 16U team, but a growth spurt could take his game to a new level.
Read full article

Matt Williams
@DraftExpress
One of the more highly regarded prospects in the class of 2020, Nico Mannion is the son of Pace Mannion who played at Utah before moving on to a lengthy stint as a roleplayer in the NBA and a star in the Italian 1st Division.  A 6'2 point guard with an advanced scoring arsenal, reliable jump shot, and an impressive feel for the game, Mannion has already fielded offers from some of the best programs in the west.
Read full article