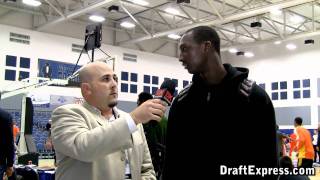 Not really looking anything like you'd expect an NBA assigned player tonot a surprise considering his stats in Europe and the fact that he has barely played in the past six monthsPape Sy had a difficult time standing out from the pack at the D-League Showcase.

Standing 6-6, with an excellent frame, long arms and solid athleticism, it's not difficult to see what intrigued the Atlanta Hawks so much from a physical standpoint in the mythical workout Sy had at their private facility that convinced them to ignore everything he had done up until that point in his career. He looks the part of an NBA wing player, even if he doesn't play anything like one.

Offensively, Sy is extremely limited, even in this environment. His shooting stroke looks slow and unnatural with his feet set, and even worse off the dribble, a big reason he's shot just 1-11 from beyond the arc this season and 10-40 from the field overall. Billed by the Hawks as a point guard coming into this event, Sy's ball-handling skills looked exceptionally poor here, to the point that he had a tough time bringing the ball up the court without turning around to protect it. While clearly a good enough athlete to get by his defender with a quick first step, Sy doesn't have the ability to change directions with the ball or execute any advanced moves, limiting his ability to drive all the way to the basket, and rendering him very turnover prone.

Defensively, Sy is very effective, as he has outstanding physical attributes with his size, length and strong frame, and brings excellent toughness and intensity to the table on top of that. He's capable of putting outstanding pressure on the ball, and can switch between positions seamlessly, giving him nice versatility. Off the ball, Sy's inexperience playing at a high level shows, as he can get lost on rotations and lacks great awareness.

Despite his defensive prowess, it's not difficult to see why Sy had a difficult time getting off the bench for a bad team in France last season. Considering his limitations and lack of experience, it's tough to envision a scenario in which could contribute enough offensively to earn him playing time at a high level.

The fact that a late 2nd round pick would fail to pan out for an NBA team is not a big surprise, as it happens every year. What's curious is that Atlanta decided to pay a few hundred thousand dollars to buy Sy out of his contract, rather than stashing him overseas. They spent a valuable roster spot and fully guaranteed NBA contract (worth almost $500,000)on him, and in the process hampered themselves from making a move to improve their team for the playoffs because of luxury tax concerns.

22-year old resume-less players like Sy can be found by the dozen all over the French league, and the Hawks likely should have had the talent-evaluation skills to distinguish that, rather than just allow themselves to be fooled so badly by a single private workout. Based on what we saw in South Padre, its unlikely that the Sy experiment will last very much longer.
Read full article