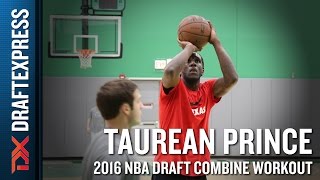 Prince was drafted in the lottery by a playoff team, which is an a-typical scenario for our projection model. Player's with Prince's key traits typically enjoy a great deal of success when allowed to slot into a projectable role, work within a system, and move themselves up the food chain. Prince's elevated serious-minded approach to opportunity and goal-focus gives him value beyond his four years of collegiate experience. The attack mentality that earned him a lotto-nod from the Hawks may have left Prince a bit out of control at times on-court at Baylor. But, his sense of perspective should serve him well as he refines his decision-making within the context of the standards of the team.

If Atlanta continues to hum along at the level of system efficiency they've enjoyed recently, Prince should quickly find ways to positively make an impact. Much as Justise Winslow in Miami, Prince is looking at a Year one season where he'll be surrounded by a number of established veterans with a more definitive hierarchy to work within than most lottery picks. As the twelfth pick, Prince may be given the chance at unseating Mike Scott - and his expiring contract - as he has the demeanor to do so. But, Atlanta's frontcourt depth was bolstered by the team's investment in Dwight Howard, making the competition for minutes fierce.

Consistency from the perimeter will likely be an important factor in this roster coming together this season. Prince's ability to be solid on both sides of the ball could give him a leg up on minutes in a switch/swing combo with Kent Bazemore if Korver continues to show signs of aging. But, he'll have to adjust to NBA three-point range first. However, it would not be surprising to see Prince in the starting lineup at some point this season. His size and versatility on the defensive end provide some intriguing matchup options and his personality is ideally suited to increasing his output the more opportunity he sees.
Read full article

Taurean Prince (full name: Taurean Waller-Prince) was a completely unheralded high school recruit, originally signing a letter of intent to attend LIU-Brooklyn (in the NEC) before a coaching change enabled him to revisit his choices. He grew 11 inches in high school, going from being a 5'8 point guard to a 6'7 center, and was always young for his class, as he easily could be a junior, being the same age as many players from that class that will be drafted this June. Prince didn't play much as a freshman at Baylor, seeing only 6 minutes per game while sitting out a number of contests, and was not a major contributor as a sophomore either, at 14 minutes per game.

It wasn't until his senior year that Prince became a full-time starter at Baylor, even if he was clearly one of the most productive sixth men in the country as a junior, and was already drawing significant NBA attention following an excellent summer where he competed for USA Basketball in the Pan-Am Games last August. For his career, Prince averaged over 20 points per-40 minutes, while shooting 38% from beyond the arc, with 8.5 rebounds, 1.9 steals and 1 block thrown in for good measure.

Prince has ideal physical tools for the role he's projected to play in the NBA, standing nearly 6'8 with a solid 6'11 ½ wingspan. He has a strong, mature frame that he's not afraid to use, and is a good athlete, being mobile, fluid and highly capable of playing above the rim.

Prince is a capable outside shooter, hitting a solid 131/348 (38%) attempts for his college career. He does a good job of spacing the floor and has a compact and repeatable stroke that should translate nicely to NBA distances. He also shows some potential as an off the dribble shooter, or even coming off screens, so it's possible he can continue to improve his versatility from the perimeter as his career moves on, as he's already made huge strides in the past few years.

With that said, Prince is far from a one-dimensional spot-up shooter at this stage. He does a great job handling the ball or finishing in transition, can punish smaller or equally sized players in the post, is intelligent moving off the ball, and will attack defenders off the dribble nicely in a straight-line in closeout situations.

His versatility is especially evident in the work he does defensively. He is big and strong enough to not get backed down by most power forwards in smaller lineups, but is also quick enough to stay in front of most perimeter players at the same time. He covers ground extremely well, and his long arms, high activity level, competitive spirit and strong instincts make him a playmaker getting in the passing lanes, and coming up with steals, blocks and rebounds.

While Baylor played quite a bit of zone, which made it challenging at times to get an accurate read on his full potential as a man to man defender, it's easy to project him as being the type of guy you can switch on every ball screen, which is all the rage in basketball these days.

On the downside, Prince is better playing a more confined and narrowly tailored role, as he demonstrated earlier in his career. Baylor's inconsistent guard play this season led to Prince being forced to shoulder more ball-handling and playmaking responsibilities, which contributed to his 2P% dropping from 53% to 47%, and his 3P% from 40% to 36%.

Prince is not a great ball-handler or overall shot-creator, as he struggles to get low to the ground and will not execute fancy moves or change gears explosively to get into the paint and create a high percentage shot. His first step is just average, and he is not one to rise up for high-flying dunks in traffic in the half-court. He didn't always seem to realize that this season, though, as he showed a tendency to get somewhat wild at times, settling for tough shots, and turning the ball over at a higher rate than you might hope.

While unlikely to develop into a star or a go-to guy, every NBA team these days needs at least one player like Taurean Prince on their roster. It's very easy to see to project him into a (highly coveted) tailor-made role in today's NBA, and he looks ready both physically and skill-wise to step in and contribute fairly early on. The fact that he's only 21 means there might be some more potential still left to tap into, particularly when surrounded by better players, where he isn't asked to do as much as he was for Baylor at times this season.More DX Scouting Reports and Video Breakdowns:
-Michigan State's Denzel Valentine
-UNLV's Stephen Zimmerman
-Marquette's Henry Ellenson
-LSU's Ben Simmons
-Michigan's Caris LeVert
-Louisville's Damion Lee
-Florida State's Malik Beasley
-Florida's Dorian Finney-Smith
-Cibona's Ante Zizic
-Estudiantes' Juan Hernangomez
-Oakland's Kay Felder
Read full article

DraftExpress
@DraftExpress
A video interview with Baylor forward Taurean Prince at the USA Basketball training camp for the Pan-American Games.

General managers and NBA scouts alike travel the world looking for long, athletic wings who can shoot and defend. The value of the 3 and D wing has skyrocketed in recent years, and although he may not be a knockdown shooter or an elite NBA athlete, Taurean Prince most certainly has the tools to fill that role. The Baylor small forward passed the eye test at Nike Academy, measuring 6' 7.5 with a 6' 11 wingspan and a frame that can easily carry at least 10-15 more pounds. His physical profile is ideal for an NBA wing, and Prince has the defensive prowess and potential as a shooter to rise up draft boards sooner rather than later.

One of the youngest soon-to-be-seniors in the country (he'll still be 21 when the 2016 NBA Draft rolls around), Prince has flown somewhat under the radar through three years despite scoring over 18 points per 40 pace adjusted and grabbing over 8.0 rebounds per 40 pace adjusted ever year he's been at Baylor.

Prince stood out at Nike Academy thanks to his defensive toughness, rebounding and shot making ability. Prince is a gritty defender who takes on the challenge of defending multiple positions, using his quickness to stay in front and his length to contest. Although it was in a camp setting, the San Antonio, TX native locked down DeMar Derozan on multiple occasions, and rarely got scored by the rest of the perimeter players throughout the course of the camp.

Prince crashes the glass, plays with toughness and does a little bit of everything on both ends. His jumper has a bit of movement at the top and isn't in the knockdown category quite yet, but he's nevertheless a very good spot up shooter who is comfortable pulling the trigger with a hand in his face (1.34 PPP when guarded which is in the 94th percentile according to Synergy Sports Technology) and gets great rotation on the ball. Prince also knocked down a couple of pull up jumpers, which gives him some hope in an area where he really struggled last year.

Prince isn't much of a shot creator, but he's able to use his size and strides to attack in a straight line and his length to finish around the rim. He's more quick than he is vertically explosive, but Prince certainly has enough juice to finish above the rim and he does a nice job of attacking the body of the weak side defender ot get to the line.

Prince does, however, have room to improve as a passer and decision maker  very important qualities for a 3 and D, role player type of wing. Prince showed some flashes as a playmaker by driving and kicking or dropping it off to the big, but he also struggles executing the simple play at times and isn't immune to making a wild pass in traffic. Improving his overall feel and becoming a more consistent jump shooter are two of the biggest keys for Prince's development.

But even with his current skill set combined with his physical tools (and the fact that he hasn't even turned 21 yet) he most definitely has enough intrigue to slide into the draft conversation in time.
Read full article