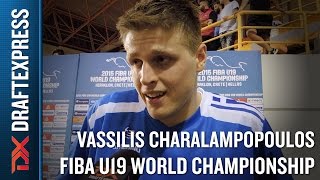 Strengths:
-Very good size for a small forward at 6-8, with a strong frame and long arms.
-One of the smartest and most polished teenagers you'll find anywhere in the world
-Great timing and smarts
-Extremely versatile player.
-Can score with back to the basket, using nifty footwork, a strong frame and the ability to finish with either hand and soft touch
-Good mechanics on catch and shoot jumpers. Can heat up from beyond the arc. Made 50% of his 3-point attempts at the U19s. Hit 40% of his 3-pointers this season as a pro
-Excellent passer. Finds cutters with bounce passes. Drives and dishes. Consistently posts strong passing metrics
-Very mature. Never rattled. Plays with supreme confidence and poise. Operates at own unique pace
-Can create his own shot on straight line drives. Changes speeds. Finishes off the glass
-Very competitive on defense. Gets in the passing lanes with anticipation skills and timing
-Excellent rebounder. 10 rebounds per-40 at U19s. 6 per-40 as a teenage pro

Weaknesses:
-Not very athletic in a traditional sense. Lacks quickness and explosiveness relative to his position at the NBA level
-Frame is already mature.
-Is he quick enough laterally to defend small forwards?
-Is he big enough to defend power forwards?

Outlook: Incredibly experienced player for an 18-year old. Saw his first minutes of pro basketball at the age of 15 already. Has already seen real minutes for Panathinaikos in both the Euroleague and Greek league. Played for the Greek National Junior team at the age of 14 at the U16 level and more than held his own. Amazingly poised and mature. Was limited at the U19s by a nasty ankle injury that would have prevented almost player from participating. Foot swelled up to abnormal sizes and needed to be drained a few hours before games. Only played six games as a result, averaging just 14 minutes per contest. Was there when his team needed him though. Played 25 minutes in the quarterfinals and 36 minutes in the semifinals, mostly on one leg. Team player and huge competitor. Doesn't ooze with athleticism or upside, but is the kind of guy you would never want to bet against. A Euro Draymond Green?
Read full article