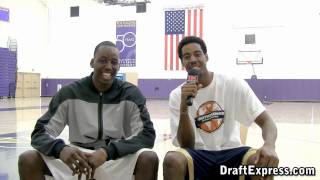 Joseph Treutlein
@DraftExpress
Alade Aminu came back to earth after his outstanding first Showcase game, scoring just 11 points on 5-10 shooting while grabbing an unimpressive 2 rebounds in 23 minutes. Aminu was also in foul trouble, finishing the game with 5 fouls, and this game definitely shed some light on his unimpressive averages (10 points, 5 rebounds) throughout the season.

Aminu's biggest problems right now lie in his inconsistency on defense and the glass, as he doesn't always rebound the way he's capable of, and he tends to get lost at times on defense. He had quite a few instances today where he was indecisive defending pick-and-rolls, leading to openings for the opposition or putting him in a position where he was forced to foul. The encouraging thing is at times Aminu looks great in these situations, as he clearly has the tools to be a versatile defender with his mobility and length.

Offensively, Aminu also has some problems, as his post game is not very reliable as of yet, even though he shows nice flashes. According to Synergy Sports Technology, Aminu is scoring just 0.75 points per possessions on post-ups, which make up the largest portion of his offensive usage. In watching him play, it's clear he's a bit lacking in instincts here, and can tend to force the issue at times. That said, his hook shot looks very good at times, as he gets great separation and his touch isn't bad.

Aminu is at his best finishing off cuts and pick-and-rolls, two situations he probably isn't used in as often as he should be. If he focused on those two aspects alone, while also developing a bit more consistency with his mid-range jumper (which is already respectable), he could be a nice role playing big in the NBA, assuming he improves his defense and rebounding.

Possibly the player with the most upside of any player in the D-League, Aminu should be getting looks for call-ups soon, as he's a low-risk option to stash on a roster and develop. That said, with the economic constraints placed on many teams (there's a reason many teams are opting to use only 13 of 15 potential roster spots), his list of potential suitors is definitely smaller than it would be normally, so it's no guarantee he finds a home before the season ends, especially because it's questionable if he could immediately contribute if forced into action.
Read full article

Richard Walker
@DraftExpress
Alade Aminu had arguably the best performance of any player in the Showcase thus far, putting up 30 points and 23 rebounds, flashing some serious upside along the way. Weve clearly been much higher on him than pretty much anyone else since the first time we seriously evaluated him at Portsmouth last year, and he did nothing to dissuade us with his play today.

Aminu is intriguing thanks to his terrific size, length, hands and solid athleticism, and obviously has a great deal of upside to continue to tap into as well. With that said, most of the NBA scouts we talked to following this game sounded fairly skeptical about fully jumping on the Aminu bandwagon, citing his lack of productivity on the season (10 points, 5 rebounds per game) thus far. Well have to see if Aminu can manage to quell those doubts tomorrow with another strong showing. Weve yet to see a better long-term NBA prospect in Boise thus far.
Read full article

Jim Hlavac
@DraftExpress
Alade Aminu might be the top overall prospect in the D-League, especially from a long-term perspective. The team went out and acquired him via trade, and may be able to develop him into a dominant Courtney Sims type presence as the season moves on. Aminu has NBA size, length and athleticism, even if he needs to add some bulk to his frame. He shows nice potential facing the basket and is a very intelligent guy off the court reportedly. Hes definitely a name to keep in mind.
Read full article

Joseph Treutlein
@DraftExpress
The Georgia Tech big man stood out from the moment he stepped out on the court in his very first game, as it immediately became clear that few if any prospects in attendance share his upside.

Standing 6-10 (possibly taller), with a tremendous 7-3 wingspan and a frame that should be able to put on plenty of weight over the next few years, Aminu obviously has great physical attributes. Hes also a very good athlete as well, running the floor like a deer and very much capable of getting off the floor to finish around the rim or alter shots on the defensive end. He was after all, a track star in high school, competing in the triple jump, high jump, and 200-yard dash.

Aminu didnt play a very big role this season at Georgia Techin fact, he came off the bench for the teams final 12 games. The fact that he struggled to make an impact on a team that finished last in the ACC and posted a 12-19 record is a bit of a red flag, but as we learned the hard last year with the way Anthony Morrow panned out, players from this team need to be looked at a more in-depth, especially ones who are only 21 years old.

Comparing the way Aminu played at Portsmouth with what we can now see from his film at Georgia Tech reveals a pretty stark contrastit doesnt seem like he was utilized very well at all in college from what we can tell. Aminu was an absolute devastating force as a pick and roll finisher for his Norfolk Naval Shipyard teamthanks to his tremendous combination of size, length, terrific hands and excellent mobility. At Georgia Tech he was barely used in this fashion at alljust 4.3% of his offensive possessions came on the pick and roll. They looked incredibly disorganized in the film we took in, with no point guard, no system, and very little ball-movement. It appeared that Aminu often was asked to play very far from the basket, and pretty much all of his shots were opportunities that he was forced to create on his own.

In these types of situations, Aminus weaknesses became painfully obvious. Despite possessing an excellent frame, he lacks a great deal of strength at the moment, which makes it very difficult for him to comfortably operate on the court against top competition. He struggles to establish deep position in the post, and his footwork is very raw. He has a difficult time finishing through contact as well, again lacking strength but also some toughness, seemingly avoiding contact on occasion. He doesnt seem to know what his limitations are at the moment, making him fairly turnover prone, and contributing to his extremely poor passing ratiogarnering an assist on just 6% of his possessions.

Aminu has above average ball-handling skills for a player his size, but hes still a ways away from knowing how to utilize them at the moment. At times youll see him look very good putting the ball on the floor from the high post with his long strides, sometimes even mixing in a crafty spin move, but this part of his game remains underdeveloped, even if he shows nice potential with it. Aminus jump-shot is not consistentas evidenced by the 59% he shot from the line, but there is again stuff to work with here, as his mechanics are sound and he appears to have decent touch.

Defensively, Aminu is productive from a statistical standpointhes a solid (although not incredible) rebounder and comes up with plenty of blocks and steals thanks to his excellent size, length and athleticismbut here too he has a ways to gobeing somewhat stuck between the power forward and center positions. He lacks the strength and toughness to defend some of the more burly big men hell encounter from time to time, getting pushed around and giving up deep position in the post, while hes not fluid or fundamentally sound enough to guard face-up power forwards on the perimeter either, looking very upright trying to move his feet against them. He tends to lose his focus fairly easily and doesnt always seem to be playing as hard as he couldbecoming smarter and more mature are things he definitely needs to work on.

Aminu may not be very close to being a legit rotation player in the NBA at this point, but he shows outstanding potential to develop into one down the road. Considering that hes the same age as many juniors in this draft (he wont turn 22 until September), it wouldnt be surprising to see a team decide to take a flyer on him somewhere in the second round, even if being glued to an NBA bench would probably not be the best thing for his development.
Read full article

Joseph Treutlein
@DraftExpress
Alade Aminu continued to impress by scoring 13 points along with 10 rebounds and 2 blocks, showing very smooth athleticism for a player his size. Aminu excels at setting screens on the perimeter and quickly rolling to the basket to get open for the score, taking advantage of his mobility and good hands. He also has a nice right-handed hook shot on the block and is pretty patient not to force the issue, resetting to the perimeter when nothing is there. When motivated, he runs the floor exceptionally well, often beating his man down the court. On the defensive end, Aminu made a few blocks rotating over in the lane, but his overall defensive game could still use some work in awareness, toughness and fundamentals. Still, hes clearly one of the more upside-laden players at this tournament, and has likely helped his stock just by being out on the floor.
Read full article