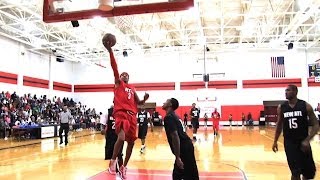 Matt Williams
@DraftExpress
Overview: Probably the most unique talent the NBA has ever seen. Lacks great size for either guard spot. Has a big wingspan and is wiry-strong. One of the quickest players in the League. Very fast and agile. Not the leaper he once was, but still explosive. Impossible to keep out of the lane. Possesses tremendous ball handling ability and a legendary crossover. Will make ridiculous shots on a nightly basis. Finds ways to score. Has the raw ability to make plays for others at times, but much more comfortable creating for himself. Scores at will from the midrange despite his size. One of the peskiest defenders in the NBA when he wants to be, which isnt that often these days. Has always had a knack for scoring. Came out of high school as a touted basketball and football player. Was a dominant force in the Big East Conference from day one. Garnered the Big East Rookie of the Year award as a freshman and Defensive Player of the Year honors in both of his collegiate season. Was selected with the first overall pick in the 1996 NBA Draft. Transitioned seamlessly into the NBA. Earned the NBA Rookie of the Year award with his prolific scoring. Has become a legend, ranking among the all-time greats in points and steals. Nine time All-Star. Named the NBA Most Valuable Player in 2001, becoming the shortest player to do so. Has had his issues off the court. Wont always see eye-to-eye with coaches, but will give a great effort every time he steps on the floor. Trying to win a championship before his storied career comes to a close.

Offense: One of the most prolific scorers in NBA history. Gets about a quarter of his offense in one-on-one situations, but is also a capable spot up player and runs the pick-and-roll effectively. Possesses an incredibly quick release on his jumper. Gets good elevation and shows the ability to shoot off balance and with a hand in his face. Lacks textbook form, but it has never mattered. Can hit the three, but not with great consistency. Hits a higher percentage of shots when defended than when left open. Not bad on the catch and shoot, but does most of his damage off the dribble. Has one of the best handles in the League. Elite level quickness makes him impossible to keep out of the lane. Changes directions with the ball on a dime. Will turn the corner whenever he wants to. Proves to be a surprisingly good finisher for a player his size. Capable of driving in either direction and is equally apt at going to the rim and pull up for jump shots. Has an array of floaters, scoops, and double pumps that he uses around the cup. Not afraid to attack a bigger defender. Doesnt seek out contact, but is creative enough to avoid it for the most part. Goes to the line at an incredible rate. Shoots a good percentage once he gets there. Gets shots off from the midrange regardless of who is defending him. Creates separation effortlessly. Loves to play one-on-one. Almost toys with defenders when he gets them alone. Can break them down with crossovers or pull back and shoot right over them. Has that killer instinct that is common in all great scorers. Has the raw ability to play the point guard position, but is much more comfortable looking for his own shot first and foremost. Draws so much attention that his teammates are often left wide open. Court vision allows him to hit the open man when hes driving to the rim. Commits a lot of turnovers, but not as many as he used to. Will lose the ball when the defense collapses on him due to his lack of size. Makes a killing in transition due to his speed. A lot more efficient than he used to be. One of the hardest players to defend in NBA history. Can score on anyone at any time. Has not had a great deal of team success over the course of his career because hes a severely undersized shooting guard who is extremely ball-dominant and shot-happy for the most part. Has been criticized for being too selfish at times.

Defense: A great defender when he wants to be, which unfortunately isnt very often. Lacks the height to be a significant factor contesting shots. Has great lateral quickness, but will get bullied into the paint by stronger guards. Will get caught up in screens a lot and often just lets his man get past him when hes met with resistance. Not nearly as effective defending shooting guards than he is at defending point guards, which puts his team at a severe disadvantage at times considering that he does not possess a point guards mentality offensively. Will be a major factor when hes making an effort. Changes his stance entirely when he gets serious. Uses his hands as well as any player in the League to get steals. Very quick to the ball when he anticipates a pass. Will close out shooters very hard when its crunch time. Very pesky when he wants to be, which isnt as often as it once was. Will grab some rebounds, not nearly as active as he could be on the defensive end.
Read full article