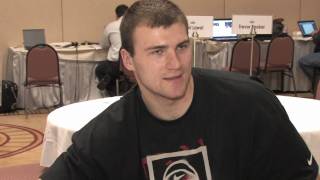 After posting solid numbers and earning the attention of NBA scouts in his first season of college basketball last year, Artsiom Parakhouski has only improved his draft stock with his play this season.

Though hes had a couple of down games against the likes of James Madison and Charleston Southern, the Belarusian center has responded with double-doubles against Kansas and Duke. Last time we checked in on him before the season started we wondered how hed respond in non-conference play, and while some question marks remain, he certainly proved he can hold his own against some of the nations best.

Parakhouskis biggest strength remains his sheer size. Hes simply dominant around the basket on the college level, and his height and strength advantage is even more apparent in Big South play.

Probably the best showcase of Parakhouskis potential physical impact at the next level was his matchup against fellow prospect Cole Aldrich and the Jayhawks. Parakhouski was bothered by Aldrichs length on a number of occasions, but saw success against him when he was able to establish deep position. On a number of possessions, Aldrich forced Parakhouski to be a finesse player, something hes shown the potential to be, but not with any sort of efficiency.

Moving forward, that may be one of the more important developments Parakhouski is yet to make. His size affords him a ton of success against the average NCAA center, and hes become especially decisive on the block. His poise on the block and ability to get to the line account for his increased scoring average, but Parakhouski continues to show flashes of potential as a shooter.

Usually able to take what the defense gives him, turn into contact, and finish, Parakhouski shows soft touch on the occasions that he goes to his turnaround jumper. Until he develops a more consistent hook shot, hell need to improve his ability to hit his turnaround jumpers to compensate for the more physically gifted NBA defenders he wont be able to seal with a simple drop step.

His jump shot currently features a low release point and little in the way of rhythm- two things hell need to work on in the future. If Parakhouski can develop a go-to-move on the block, it will ease his transition to the NBA considerably.

Defensively, Parakhouski has shown some improvement this season, largely due to the improvements hes made to his bodywhich looks significantly better. He appears more comfortable making rotations from the weakside, which has allowed him to block more shots based on his size. However, his lack of lateral quickness will likely limit his defensive presence on the next level.

His physical strength allows him play effective one-on-one defensive in the post, and he shows active feet playing in the middle of Radfords zone, but he isnt fluid or explosive enough to project as a surefire quality defender just yet.

Parakhouski has put himself firmly on the radar of NBA decision-makers with his play thus far this season it is hard to ignore a player that ranks third in our database in PER, and has only been playing basketball for about five years now.

Hes positioned himself as one of the top seniors in the NCAA and one of the better center prospects in the discussion for this seasons draft. With all said, hed still be well served to steer his team to the tournament to put an exclamation point on his resume against a big school to end the year.

Regardless of his play down the stretch, Parakhouski will draw a lot of attention come draft season considering his physical profile, production and the fact that he still has plenty of potential left to continue to improve.
Read full article

Born in Belarus and having only a handful of seasons of organized basketball and English lessons under his belt, Artsiom Parakhouski made a splash in his first season in the NCAA. After leading Radford to a Big South title and the NCAA tournament in 2009, Artsiom Parakhouski returns to the small Virginia-based University for his senior season with the attention of NBA scouts.

Standing almost 7-feet tall and possessing a solid frame, the reigning Big South Player of the Year has an exceptional physical profile for a center, let alone one playing in a small NCAA conference. On top of his sheer size, Parakhouski possesses decent end to end mobility and some leaping ability, reminiscent of a less explosive Kyrylo Fesenko, as he lacks a degree of lateral speed and the quick leaping ability that would help him translate his size to the next level. Often the tallest player on the floor by a wide margin in conference play, Parakhouskis averages of 16.2 points, 11.2 rebounds, and 1.5 blocks are all representative of his ability to impose his size on lesser competition.

While it is easy to write off some true centers posting good numbers in small conferences, Parakhouski is an interesting case due to his lack of playing experience, physical maturity, and his production against top competition. After two seasons at Junior College juggernaut Southern Idaho College where he proved to be a productive contributor, but not a first option, Parakhouski carried the load for Radford on most nights last season. Though he didnt have the best game of his career against Tyler Hansbrough and UNC in the first round of the NCAA tournament, scoring 10 points on 3-15 shooting with 10 rebounds, he held his own against both Wake Forest and Virginia, going for a double-double in both contests.

Parakhouskis ability to show well against top competition will have a considerable impact on where hes slated moving into next years draft season. In the Big South, he proves incredibly difficult to stop, as the big target he provides underneath, his solid hands, and his ability to maneuver around the paint for offensive rebounds and dump passes earn him a lot of easy shots right at the basket. Showing good finishing ability, keeping the ball high and dunking it whenever possible, Parakhouski has his way with interior defenders in the Big South, though he is prone to have his shot blocked against players with comparable physical gifts.

In addition to finishing at a high rate, Parakhouski does some damage in post up situations at as well. Preferring to operate over his right shoulder, Parakhouski displays a nice turnaround jumper turning in either direction, and flashes a hook shot on occasion. Having little trouble turning and elevating over his defender, Parakhouskis short range touch appears solid, and hes even able to step out and knock down an occasional midrange jumper. Only average from the foul line, shooting only 65.5%, Parakhouskis improvements from the high post will only augment the things that he already does well on the college level.

Much like the instincts he displays in his basic back to the basket game, Parakhouski shows some good things on the defensive end. Disciplined and not overly foul prone, Parakhouski lacks the quickness to effectively defend the perimeter and the awareness to be a very good weakside defender. However, he plays solid defense when defending his man one-on-one in the post. One of the NCAA's top returning rebounders, as Parakhouski gains experience, his ability to be more physical defensively and react more quickly on the weakside will be essential to his defensive success regardless of where hes playing next season.

With only six years of organized basketball under his belt, Parakhouski has made a seamless transition to the NCAA. In position to repeat as Big South Player of the Year, if Parakhouski can lead his team to the NCAA tournament, hell have every opportunity to boost his stock and eventually get drafted. Considering his current level of competition, Parakhouski could be a candidate for the Portsmouth Invitational Tournament next spring, and is likely to see a lot of interest when teams begin scheduling private workouts. If Parakhouski can add some polish to his game, pack on some muscle, and continue on the learning curve that he appears to be on, he seems like a strong candidate to land in the second round given the premium put on size.
Read full article