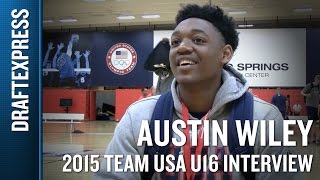 Strengths
-Although not all that tall at 6' 9, Wiley has excellent tools for a center prospect thanks to his 7' 4.5 wingspan, 9' 2 standing reach and strong, proportionate 250-pound frame.
-Mobile for his size. Can get out and run the floor with solid fluidity and high effort level. Scored 1.4 points per possession in transition (22% of his offense) at the FIBA U17 World Championships.
-Size and strength allows him to catch deep in the post. Gets wide and gives a target.
-Can make a short-range right-handed jump hook. Shows flashes on the block, although he has a ways to go.
-Has a very developable shooting stroke that could make him a mid-range threat in time. Gets good rotation, sound mechanically, just needs more reps.
-Excellent rebounder, especially on the offensive glass. Grabbed a monstrous 20.8 rebounds per 40 minutes at the U17s, 11.1 of which came on the offensive boards. Plays with a high motor and uses his strength and length to keep plays alive. Good instincts. Finds a body on the defensive glass. Good box out technique.
-Fairly post defender. Uses his strength to battle and his length to alter shots. Needs to improve fundamentally but he shows flashes.

Weaknesses
-Not all that explosive in traffic, has to gather. Needs time and space to play above the rim. Shot only 8-of-24 (33%) at the rim in the half court at the U17s.
-Not overly skilled on the interior - 45.5% from 2-point range. Very left shoulder and right hand dominant both in the post and around the rim. Gets by on sheer size and strength but could use more counter moves and fluidity in his footwork while on the block.
-Sold mechanics from mid-range spots but isn't a threat at this stage of his development - 0-for-3 on jumpers, 16-for-32 from the line.
-Hands can be a little bit shaky. Brings the ball down in traffic. Dribbles rather than drop stepping and going up strong. A bit too rushed in finishing situations.
-Doesn't have a great feel for the game. Too sped up. Dished out only 1 assist and committed 10 turnovers in 82 total minutes. Not always the most willing passer.
-Underwent two knee surgeries in 2015 (one on each knee). Struggles to sit down in a stance and defend the perimeter. Still a little stiff in the knees. Has issues keeping the ball contained in pick and roll both in terms of lateral quickness and fundamentals. Reaches on the perimeter.
-Not the most fundamentally sound post defender. Struggles to get through cross screens. Caught leaning on his defender, allowing his opponent to spin off of him. Foul prone.
-His lack of standstill explosiveness and still developing awareness limit him a bit as a rim protector despite his impressive length and reach.
-While he's an excellent offensive rebounder and very good in the paint on the defensive glass, he doesn't quite have the quick-twitch mobility to get rebounds outside of his area consistently.

Outlook From a pure numbers standpoint the Auburn commit had a tremendous U17s as he posted 25.9 points and 20.8 rebounds per 40 minutes. His sheer size and activity allowed him to have a major impact on the backboards while showing his mobility in transition. With that said, Wiley's game and athletic ability is very much a work in progress. He doesn't bring much to the table offensively outside of rim runs and put backs and has a ways to go with his skill development and feel for the game. Wiley's pick and roll defense and fundamentals on that end will also need some polish before he can be a consistent contributor defensively. Wiley is still shaking off the cobwebs after missing a large chunk of time with injuries and there's quite a bit to like about his physical profile, he's just more of a long term prospect than an instant impact type of guy at this stage of his development.
Read full article

Mike Schmitz
@Mike_Schmitz
Austin Wiley (#8 Scout, #11 ESPN, #12 Rivals, #9 24/7) was in street clothes in Colorado Springs, as he was only invited by USA Basketball to rehab the torn patella tendon surgery he had back in April. Wiley told us he foolishly played through the injury over the course of the season, but eventually elected to have the surgery, which will sideline him through most of the summer.

Despite not taking part in any of the competitive action, Wiley was still a standout just by virtue of his measurements, which revealed continued physical development that made him one of the most impressive specimens in attendance. Wiley now stands just a hair under 6-10 in shoes, with a 241 pound frame (8 pounds heavier than last October), a 7-4 wingspan and a 9-2 standing reach. Only 16 years old, he is well on his way to being a NBA-sized center, as long as he can stay healthy. He went out of his way to tell us that despite the fact that both his parents played at Auburn, he is still very much wide open as far as his college recruitment is concerned.

We talked to him about as development as a basketball player and much more in the following interview:

Jonathan Givony
@DraftExpress
The same age as many of the 2018 recruits here, 15 year-old 2017 standout Austin Wiley measured 6'7.5 without shoes to go along with a 233-pound frame and a 7'3 wingspan. His 7.5 inch wingspan-to-height differential was among the top marks registered by the underclassmen at this event. Wiley's frame still has a ton of room for growth, and it will be interesting to see just how tall he winds up being closer to his high school graduation. The son of two basketball players that both went to Auburn, Wiley is extremely mature relative to his age, and shows a very nice competitive streak crashing the offensive glass, blocking shots and finishing plays inside.
Read full article