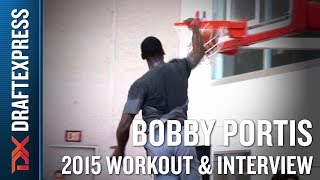 Competing in his second Summer League, Bobby Portis led the Bulls to a perfect 7-0 record and a Summer League Championship. Portis led the Bulls in points and rebounds per game and finished 3rd overall in offensive rebounds, at 3.9 per game behind Jameel Warney and Alan Williams. Portis, who is known for his physical play around the rim and constant energy on the glass, continued to show that he is more than just a hustle player. He shot just 30% on 52 attempts from 3 last year, but made 10-24 from deep in Vegas and looked comfortable spacing the floor or playing out of the pick and pop. The second year pro out of Arkansas also showed glimpses of an impressive face up and back to the basket game, hitting some tough fade away jumpers. He is not an elite athlete, but he is a quick jumper and makes up for whatever lack of athletic ability he has with effort. Portis already carved out a valuable bench role for the Bulls last season, and his role will presumably increase given his development and the departures of Joakim Noah and Pau Gasol.
Read full article

DraftExpress
@DraftExpress
An interview with Arkansas' Bobby Portis, featuring footage from his pre-draft workouts in Chicago.

Opting to return to Arkansas for his junior season, Bobby Portis became one of the best players in the SEC en route to being named the SEC Player of the Year. He wasn't able to lead the Razorbacks past the first weekend of the NCAA Tournament, as they fell to North Carolina in the second round, but he ended the season averaging 21.5 points and 11.0 rebounds per 40 minutes pace adjusted and became the first sophomore in school history with 1,000 points and 500 rebounds.


(Video may not load with Internet Explorer. Use Chrome or Firefox)

The 6'10.5, 235-pound forward has some intriguing physical tools, centered around his seeming never-ending motor. He competes with tenacity and while he isn't the most explosive player, he zips around the floor with constant energy to affect play on both ends with his mobility. To round out his physical attributes, he sports a long wingspan, measured at 7'1.5, and excellent strength to help play physically on the interior.

Portis will get many baskets at the next level solely from his energy, as he runs the floor in transition well to get ahead of the defense, rolls aggressively to the rim, and establishes deep post position. He's also a relentless offensive rebounder, as his 4.5 offensive rebounds ranks 4th among all players in our top 100. He crashes the glass hard with a great nose for the ball, chases down rebounds outside his area, and proves adept at converting put backs.

He's an improved finisher around the rim in the half court from his freshman year, raising his average from 60% to 64.2% according to Synergy Sports Technology. His lack of explosiveness hurts his ability to finish against rim protectors, so he counters with a quick second jump pursuing offensive rebounds and a quick release to avoid being blocked. He'll need to continue to get stronger or refine his finesse game to find success at the rim at the next level as he is mainly a below the rim player

Portis is a great jump shooter for a big man and has range to the mid-range and beyond. He shot 41.2% on all jump shots according to Synergy Sports Technology which includes 43.5% on jump shot measured from 17 feet to the three point line. He has an unconventional release and follow through but he is consistent with it and it seems to work for him. He hasn't yet looked to extend his shot out to the three point, as he took just 1.0 three's per 40 minutes pace adjusted. He was effective in that small sample connecting on 46.7% of such attempts and increasing his range would make him a more dangerous, versatile offensive player.

Portis has a solid, but not spectacular back to the basket game, as he doesn't have the array of moves needed to consistently beat defenders. He is quick enough to beat defenders to the spot or strong enough to back them down, which does help him create easy looks at times. He has also demonstrated a useable face-up game, along with a drop-step and hook shot that he could use to score on NBA defenders. He's a fairly patient scorer on the block, doing a nice job looking for cutters and turning the ball over at a low rate. However, he doesn't have the counter moves necessary to score consistently on the block and often relies on a tough turnaround, fadeaway jump shot when he can't get past his defender.

Defensively, Portis is constantly active and has the potential to guard either interior or perimeter players. He can leverage his size and strength to slow down big men in the paint and showed the ability to move his feet well enough to stay in front of guards on the perimeter when Arkansas switched on the pick and roll. With the intensity he brings to the court combined with his physical tools, he could help a team in multiple ways defensively and has the potential to be a nice asset for a NBA team on this end of the floor.


(Video may not load with Internet Explorer. Use Chrome or Firefox)

One area he will have to improve upon is his defensive rebounding. While he has posted great offensive rebounding numbers, he hasn't had this success translate to the defensive side, where he averages just 6.4 defensive rebounds per 40 minutes pace adjusted. He doesn't always focus on boxing out his opponent and then doesn't have the leaping ability necessary to grab the rebound in traffic. He has the lower body strength to hold his opponents and will need to concentrate on this aspect to contribute as a defensive rebounder for a NBA team.

He doesn't project to be a great rim protector at the next level, as his 1.7 blocks per 40 minutes pace adjusted is an average mark for power forwards in our top 100. He'll surprise people at times with his closing speed but he didn't display the explosiveness and length to be a dominant rim protector at the college level.

Overall, Portis may not project to have a high ceiling but his skill set suggests he should be able to find a spot in the league as a high-impact role player. He has enough offensive weapons to find ways to contribute offensive and his motor and physical tools should help him compete on the defensive side. If he continues to play with high energy, he'll be able to impact on both ends of the floor and find a home in a NBA rotation.
Read full article

Strengths:
-Good size at 6-9 ½ (measured at Nike Skills Academy)
-Good frame. 215 pounds.
-Solid length. 7-0 wingspan.
-Will post up aggressively
-Can face-up and attack from the mid-post
-Can hit a mid-range jumper
-Competitive kid. Not afraid of contact.
-Uses his size and length defensively
-Passes out of the post effectively
-Solid feel for game

Weaknesses:
-Good not great athlete
-Not an incredibly explosive leaper
-Average defensive rebounder
-Needs to continue to improve his offensive versatility and polish

Outlook:
Rock solid big man at high school level. Will be a contributor from day one at Arkansas. Extent of his upside remains to be seen.