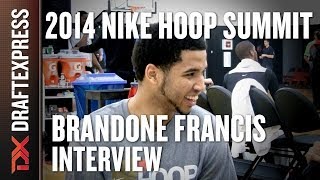 Mike Schmitz
@Mike_Schmitz
Leaving the Dominican Republic to come to the United States to pursue his basketball aspirations at Arlington Country Day HS in Florida just a few years ago, Brandone Francis was not among the more highly regarded players on the World Select Team, but had a few nice moments amid struggles with his shooting and decision-making.

A somewhat stocky, strong 6'5 guard with a 6'7 wingspan, Francis has a fairly mature frame and decent size for a shooting guard prospect. An average athlete, he shows good speed when he gets a head of steam in the open floor, but is not overwhelming quick or explosive when making plays in the half court.

Known for his skill level and ability to make plays with the ball in his hands coming into this event, Francis was forced to play point guard out of necessity for stretches. Though he made a few nice passes, looking ahead to the college game, he's is more of a scorer with passing ability than a natural playmaker at the moment as he gets out of control at times and is still in the early stages of learning how to play at different speeds.

Francis had a rough week shooting the ball, struggling with his range off the catch in drills and looking a bit erratic off the dribble in the scrimmages, but he still proved capable of making shots just inside the college three-point line with some consistency.

Perhaps the best thing Francis did was bring terrific energy to the floor, playing hard and being vocal much of the week. He's a solid rebounder for a guard and is a willing defender as well. He's not great in any one area at this point, and it will be interesting to watch Bill Donovan mold him into a player over time given his competitiveness and ability to do a little bit of everything.
Read full article