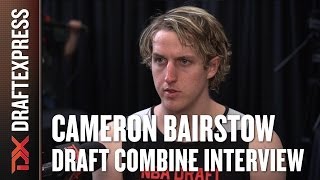 Derek Bodner
@DerekBodnerNBA
Speaking of incredibly diverse offensive players, Cameron Bairstow was one of the most diverse offensive players in the country, and his 18.4 possessions used per game were tops in this group. With 28% of his offense coming from post-ups on 1.08 points per possession, as well as 29.4% of his offense coming from jump shots at an incredible 1.04 points per possession, few had the inside-outside game that Bairstow flashed. Bairstow has some defensive concerns, and it would be beneficial if he could extend his range out to three point territory, but the diversity of his skill set could get him a look.
Read full article

After a fairly nondescript first three years in Albuquerque, New Mexico, Cameron Bairstow exploded in a major way for the Lobos during his senior season. Bairstow, who had never hit double figures in points per game during his first three seasons at New Mexico, saw his scoring average jump from 9.7 points per game and 16.3 points per 40 minutes pace adjusted to an incredible 20.4 points per game and 24.8 points per 40 minutes pace adjusted, a number that ranks 5th among our top 100 prospects. In somewhat atypical fashion for a player who shouldered a drastically increased role, Bairstow also saw his efficiency jump from a 53.7% true shooting percentage to an excellent 61.1%, making him one of the most lethal scorers in college basketball.

A big part of Bairstow's game is the midrange jump shot. While the midrange game has fallen out of favor among statistically-minded front offices, the incredible efficiency with which Bairstow connects makes him the exception to the rule. Bairstow connected at an incredible 63.8% from shots between 17 feet and the 3-point line during his senior season, yielding a 1.277 points per possession that ranked as the most efficient in college basketball among players with at least 40 attempts.

The overall sample size of just 47 possessions used on midrange jump shots is relatively small, and a little bit of a regression is virtually guaranteed. Not because the midrange jump shot isn't clearly a reliable weapon for Bairstow  it is, and his form, balance, and follow through are all solid and repeatable  it's just that the 1.277 points per possession yielded was a historically great performance, and the best of any player with at least 40 attempts in a season since Synergy Sports Technology started keeping track.

Still, if Bairstow could show the potential to extend that range out to three point territory, it would be a valuable addition to his game long term. He attempted only 6 three point attempts over his 4 year college career, going only 1-3 from three during his junior season. During the NBA Combine he seemed to shoot the ball very well from both college and NBA 3-point line, which although a very small sample size, shows that he certainly has the potential to extend his range as a pro.

Bairstow's proficiency as a jump shooter also sets up major portions of both his pick and roll, post-up, and dribble drive game. With a strong upper body and good technique setting picks, combined with his ability as a catch and shoot player, the pick and pop game is an area where Bairstow could contribute at the next level, whether that be in the NBA or overseas. Similarly, his ability to hit a fadeaway jump shot over either shoulder in the post presents a go-to move for Bairstow, and one that could be there at the next level even when he doesn't have the strength advantage that he enjoyed against less physically mature college players.

The rest of Bairstow's post-up game has also seen considerable improvements over the years. After coming to New Mexico as a rail-thin 210 pound freshman, Bairstow has gradually added bulk to his frame, which now stands at a solid 252 pounds, and the long hours that he has put into the weight room over the years is readily obvious. Bairstow uses this added strength well in the post, showing a willingness and an ability to seal and dislodge his defender and create space, which along with a solid, if not overly advanced footwork create a force in the post at the collegiate level. Whether or not this portion of his game translates is somewhat in question, though, as his average length and explosiveness (although he seems to be slightly more explosive when jumping off of 2 feet and after having time to gather himself) could lead to some difficulties finishing over length at the next level. Still the considerable improvement in his strength, feel, and footwork are a testament to his strong work ethic.

While Bairstow doesn't create a ton off the bounce, the threat he poses as a jump shooter, combined with a functional dribble with either hand and deceptive quickness do open up driving lanes for the big man. While Bairstow would not be described as an explosive athlete, particularly when trying to explode off of one foot while driving down the lane, he has very good touch around the hoop and, perhaps more impressively, a willingness and ability to draw contact and get to the line at an exceptional rate. Bairstow's 10.7 free throw attempts per 40 minutes pace adjusted rank as the best figure in our top 100 database, another factor that combines to create a very efficient big man despite his reliance on midrange jump shots.

Again, his lack of explosion around the hoop impacts his ability in both finishing off of cuts and offensive rebounds, but his good touch, ability to shield the ball from defenders, and his physicality down low to lower his shoulder to create space and also his ability and willingness to absorb contact make him efficient at the collegiate level, as the 1.184 points per possession he posts while finishing around the basket rank more efficient than nearly two-thirds of college basketball, according to Synergy Sports Technology.

The defensive side of the ball presents some fairly predictable concerns for Bairstow going forward. He plays a very soft pick and roll defense, providing a fair amount of space for the ball handler and not providing much interference, nor having the greatest foot speed to recover back to his man. The perimeter as a whole presents some struggles for Bairstow defensively, as he has a rather upright defensive stance, struggles to move his feet, and must do a better job of working to contest perimeter shots. His agility testing at the combine, as his 11.39 second agility test ranked above average for big men at the combine, presents some hope going forward, although this largely falls out of line with how he appears to move his feet in game situations.

Bairstow does do a good job defending the post, however, as his brute strength provides him with a good base to work with in this regard, and he does a good job bodying his man up early and holding his position. Bairstow averaged a modest 1.8 blocks per 40 minutes pace adjusted, and is unlikely to be a major shot blocking presence at the next level, although he does seem to have a solid grasp of team rotation defensive concepts. One area where it would be nice to see some improvement from Bairstow would be on the defensive glass, where his 6.3 defensive rebounds per 40 minutes pace adjusted and 16.6% defensive rebounding rate were both below average for a big man, and are fairly consistent with his production throughout his career. With his lack of projected weakside shot blocking, having an impact on the glass would be a huge addition to his impact on this side of the court.

Cameron Bairstow came into his senior season barely on the radar in terms of being an NBA prospect, however the Australian showed as much improvement over the past 12 months as anybody in the NCAA. There are still ample concerns about how Bairstow's post game will translate, about whether he can extend his shooting range out to three point territory, and whether he can defend adequately enough to be worthy of minutes at the next level, and answers to any of these questions could go a long way towards him getting the chance to be on an NBA roster next season. Still, the sheer amount of work put into his both his skill set and his physique gives Bairstow a chance, and his progress going forward, despite the fact that he turned 23 earlier in the season, will be something to watch, even if it his development continues overseas or in the D-League initially, rather than in the NBA.
Read full article