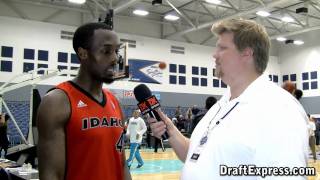 After playing for three different teams in the NBA on ten-day contracts last season, Cedric Jackson is back in the D-League once again where he's one of the point guards most likely to see a call-up when teams start offering ten-day contracts. Not much has changed for Jackson over the past year aside from some subtle improvements in little areas of his game.

A quick point guard with good size and a high motor, Jackson has nice creativity and shiftiness with the ball, being a good threat operating off the dribble, especially in pick-and-roll situations. His style of play is one that is very ball-dominant, something that is further magnified by his team's style of play, which centers highly on isolations and pick-and-rolls, not having much in terms of off-ball movement or play calling.

As a point guard, Jackson shows very good vision with the ball, especially in the lane and running the pick-and-roll, seeing all the options and making some very tough passes on the move. His ability to change directions and keep his head up with the ball are key to his game, and he appears to be improving his feel for the game as he gets more experience.

In terms of his own offense, Jackson does a good job getting to the rim with a nice array of crossovers and good footwork, though he struggles to finish well at the basket despite showing pretty good creativity. He has further problems at the free-throw line, as while he gets there at a decent rate, he has struggled to shoot over 70% at most of his many stops in college, the D-League, and the NBA.

Jackson does show a nice mid-range game, being capable of pulling up off the dribble and creating his own shots out of isolations and pick-and-rolls, but his below average three-point shooting is probably the biggest thing holding him back right now, as it holds back how effective he can be out of the pick-and-roll and hurts his ability to play off the ball.

Defensively, Jackson is extremely tough and active, showing a good stance, excellent hands, and solid overall awareness. He makes a lot of plays off the ball, communicates pretty well, and does a good job in man-to-man perimeter defense as well.

Looking forward, Jackson could certainly get some more chances to play in the league, having already played for the Spurs, Cavs, and Wizards. His ball-dominant style of play poses a problem for fitting into what most NBA coaches are looking for, but his prowess in the pick-and-roll and his defense are very attractive qualities, while he has plenty of size and athleticism for the point guard spot as well. If he could develop into a reliable three-point shooter he could have a chance to develop into a solid backup point guard in the NBA, and that needs to be his main priority at the moment.
Read full article