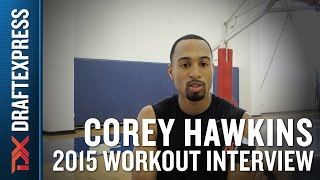 Not highly recruited out of high school, Corey Hawkins ended his collegiate career by playing three years at UC Davis after starting off as a freshman at Arizona State. The son of former NBA player Hersey Hawkins was named the Big West Conference Player of the Year after leading the Aggies to the regular season title and a NIT appearance in his senior season. Working his way through the pre-draft process, which included an invitation to the NBA Draft Combine, Hawkins will look to show his skills can translate to the NBA and work his way onto a NBA roster.

The oldest player in our top 100, turning 24 in August, Hawkins was the seventh leading scorer in the country on a per game basis and the leading scorer per 40 minutes pace adjusted in our top 100 at 25.5 points on a terrific 66% true shooting percentage, also tops among players in our top 100. Hawkins is a versatile scorer and did so in a highly efficient manner and proving he can continue to score in a variety of ways against other NBA hopefuls will be big for him in the upcoming months.

A vastly improved 3-point shooter in his senior season, Hawkins shot 49.1% on 7.3 attempts per 40 minutes pace adjusted, the second best mark among players in our top-100. This is a large step up from the 31% he shot as a junior, so he will need to prove that not only can he shoot from the NBA distance but that his senior shooting is the result of improvement and not a one year anomaly. Hawkins has a nice release point on his shot and although he will be a little undersized at 6'1.75 at the next level, he gets good lift on his jump shots and has a quick release that should allow him to get his shot off against NBA defenders.

Able to work both on and off the ball, Hawkins could be a nice combo guard in the right situation. He shot 51.5% on his catch and shoot opportunities and 48.7% on his jump shots off the dribble. He can spot up around the arc, uses screens well or can work off the bounce to get good jump shots. Hawkins is just an average athlete, not possessing impressive quickness or explosiveness, so he will need to rely more on crisp movements and changes of speeds to get his offense against NBA defenses.

On the ball, Hawkins is a capable pick and roll player, as 40.4% of his offensive possessions were categorized as the ball handler in ball screens by Synergy Sports Technology. He combines his ability to use screens to his advantage with solid ball handling skills to get into the paint and finish. His lack of quickness and explosiveness could prevent him from being a good finisher at the rim but he has a nice touch on his floater that he uses before he meets the shot blocking big man. He's great at drawing contact which will help him put up points when he gets into the paint, as his 6.9 free throw attempts per 40 minutes pace adjusted ranked third among shooting guards in our top 100.

He is comfortable driving both to his right and left and has some advanced ball handling moves that he uses to create separation that should help him overcome his average athletic skills. If he can mix in some change of speeds moves to accelerate past the defense, he should be able to score at the next level.

Hawkins is a solid passer off the dribble at times, but most frequently looked for his own offense while at UC Davis. Although he showed the ability to hit his teammates in the right spot when he did pass, he often missed teammates after drawing the defense toward him, which hurt his ability to get his teammates involved. He also had a tendency to turn the ball over, as his 3.9 turnovers per 40 minutes was [http://www.draftexpress.com/stats.php?year=2015&league=NCAA&per=per40pace&qual=top100&sort2=DESC&pos=SG&stage=all&min=15&conference=&sort=25]second worst among shooting guards in our top 100 which resulted in a pure point rating of -3.10.

Defensively, Hawkins has a nice foundation, but his ability to translate as a plus defender at the next level remains uncertain. While he will struggle with bigger offensive players, his 6'8 wingspan will help him compete defensively and his ability to move laterally will help him slow down penetration. He won't be a great stat producer defensively, as he isn't a shotblocker, blocking just six last season, and isn't quick enough to generate steals on a regular basis. He can contribute by playing with energy and focus while concentrating on learning the nuances of a NBA style defense to make the right rotations and being in the right positions to help his team.

As he moves through the pre-draft process, he needs to show that he can hold his own athletically against NBA level players to generate offense and be a consistent defensive player. With his ability to score in multiple ways, Hawkins has the potential to play his way onto a NBA roster and into a rotation eventually thanks to his perimeter shooting prowess. If not, learning to run a NBA offense in addition to being a capable off-ball scorer will make him a more well-rounded player and more attractive to NBA teams which means we could see him in the NBA at some point in the near future.
Read full article