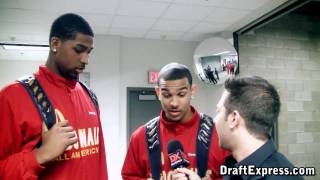 Matt Williams
@DraftExpress
A week before the Hoop Summit, we had a chance to chat with Tristan Thompson and Cory Joseph, teammates on the World Team. We discussed, amongst other things, the future of Canadian basketball and their place on the national team.

Matt Williams
@DraftExpress
Cory Joseph stepped up in a big way today. Relatively quiet through the first two days we took in, Joseph exploded in the scrimmage today, getting to the rim at will against Jason Cadee, knocking down a couple of jumpers, and finishing with some soft floaters in the lane. He did a nice job setting up the offense for his team during the scrimmage, making some smart passes and playing low mistake basketball throughout. After winning the three-point contest at the McDonald's All-American game, this was a well-rounded showing for the Canadian guard.

More impressive than Joseph's play on offense was his play on defensive. He and Tristan Thompson gave their teammates fits during the scrimmage when asked to apply full court pressure. Showing excellent lateral quickness and good length, Joseph proved to be a very pesky defender. It will be interesting to see how he fares against the likes on Brandon Knight and Kyrie Irving tomorrow.
Read full article

Skyrocketing up the 2010 point guard and overall rankings in the past year, Cory Joseph (#22 Scout, #7 Rivals, #30 ESPN) just continues to play better and better, showing off his extremely advanced skill level and feel for the game.

Joseph came out the gates extremely aggressive in this game, over-dribbling the ball on nearly every play and either attacking the basket or giving the ball up at the last second. While it didn't look pretty to start, the results were undeniable, as he scored at will over and around opponents, showing off incredible body control and touch in the lane, scoring on all kinds of moves, be it floaters, reverse lay-ups, spin drives, or pull-up shots. He's incredibly smooth with the ball in his hands, can hit pull-up jumpers going left or right, has range to the three-point line and then some, and can finish with either hand at the basket. From a pure skills standpoint, there's nothing Cory Joseph doesn't have.

As a point guard, some questions can certainly be made about Joseph's approach, as he's clearly a shoot-first type player who loves having the ball in his hands, but it's hard to argue with the results, as Findlay has only lost one game in the past two seasons. Projecting to the next level, as long as Joseph adjusts to a more balanced offense in terms of touches, he should be an exceptionally good college player, though there are still some questions about how his physical tools will allow him to project to the NBA level. Regardless, it's early in his development, so it's tough to say anything finite on that front just yet.
Read full article

Jonathan Givony
@DraftExpress
The clear-cut MVP of the Adidas Nations tournament, Cory Joseph (#25 Scout, #7 Rivals, #30 ESPN) led his team to within a single possession of winning the championship game, while leading the entire camp in scoring. The more you watch Joseph, the more you feel like hes destined to become a fantastic player at the college level, even if there remain some question marks about his long-term potential.

Josephs physical attributes arent great, as his body is just OK and his athleticism not much more than average. He makes up for that though with his ability to play at different speeds, an excellent basketball IQ, and a fearless attitude. Joseph has a great demeanor on the floor and a real winners mentality. Hes a calm, steady, competitive guy who tends to dominate the ball, but can absolutely score with the best of them.

Offensively, Josephs best attribute is clearly his jump-shot. He is terrific with his feet set and almost just as dangerous pulling up off the dribble, which he likes to do quite a bit after creating space for himself in the mid-range area. He lacks the explosiveness to get into the paint and finish at a high level, but is very crafty using his body around the rim and has a very nice floater he likes to utilize.

Defensively, Joseph is limited by his average lateral quickness, but he does put a good effort in, showing nice intensity and a good feel for staying in front of his man.

As a point guard, Joseph is mostly a mixed bag at this stage, as he clearly needs to dominate the ball to be most effective, but is far more comfortable looking for his own shot than he is running a team. His shot-selection leaves something to be desired at times, but its possible that with better teammates around him, he could show more in this area than we were able to see. He doesnt appear to be a selfish player, and seems to have a very good demeanor on the floor.

Joseph has skyrocketed up the recruiting rankings since we last saw him in November of last year, even moving up into the top-10 on some peoples boards (Rivals.com for instance). While he may not share the upside of some of his counterparts in that part of the rankings, he has been incredibly productive in every setting hes been in as of late, most notably the FIBA U-19 World Championships. He has a chance to emerge as a Stephen Curry type scorer at the college level if he continues to improve his all-around game.
Read full article

National Prep Showcase--Best of The Rest

Joseph Treutlein
@DraftExpress
Cory Joseph (#72 Scout, #110 Rivals, #54 ESPN), a 6'3 Canadian combo guard and brother of Minnesota Gopher Devoe Joseph, seems to be coming along very nicely in his development, having back-to-back strong games running the offense for Findlay Prep, dishing out assists and killing defenses with his absolutely lethal three-point shot. Joseph's shot has textbook form with a high and quick release, and he can shoot it spotting up or pulling up off one or two dribbles equally well, even hitting it with proficiency moving left and right. He's not much of a penetrator in the half court, though, mostly settling to run the offense with pass penetration, or occasionally taking one or two dribbles in for a quick drive-and-kick.

Transition is a different, story, though, as Joseph will get a bit more creative with the ball, doing a good job keeping his head up and making smart passes. As an athlete, Joseph appears to be pretty quick with the ball, and also had one impressive dunk in transition this weekend, but doesn't appear to have blow-you-away explosiveness.

It's obviously early in his development, as he's still feeling his way out with whether he'll be a point guard or combo guard, but the early returns are promising. He has interest from many high majors, and it'll be very interesting to see how his game progresses over the next year.
Read full article