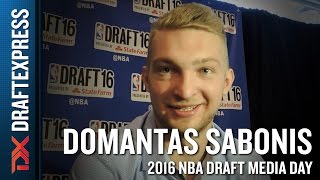 Coming off a season where he earned All-WCC Second Team honors as a freshman despite playing just 21.8 minutes per game off the bench, Domantas Sabonis returned to Spokane figuring to once again play a key reserve role for the Bulldogs behind Przemek Karnowski and Kyle Wiltjer. An early injury to Karnowski created a void at the center position, which figured to be a golden opportunity for Sabonis to emerge as a workhorse inside, suddenly playing an essential role in an offense built around an exceptional front court.

Rising to the occasion, Sabonis, who ranked among the PER leaders at the U20 European Championship last summer before making his Eurobasket debut for Lithuania, averaged 17.5 points and 11.8 rebounds per game as a sophomore, helping Gonzaga to its 18th straight NCAA Tournament appearance via a WCC Tournament Championship, and ultimately, a spot in the Sweet 16. Earning a spot on the All-WCC First Team and being named an Academic All-American, Sabonis came up big for Mark Few when his number was called after just five games, emerging as one of the more productive, efficient big men in the country, and solidifying himself as a potential top-20 pick.

Measured at 6'10 in shoes with a below average 6'10.5 wingspan and a strong 238-pound frame at the 2015 Nike Skills Academy last summer, Sabonis lacks great length for a power forward, let alone a center, and doesn't compensate with great leaping ability. Those limitations did not stop him from being brutally effective at the college level as his combination of mobility, fundamentals, and extreme desire to win often shined through as he outworked opposing big men for rebounds and scoring opportunities inside. They do raise some concerns about his ability to continue to do so at the next level, though.

Seeing his usage nearly double in one of the most post-oriented offensive systems in the country, Sabonis averaged a terrific 1.1 points per possession over 16 possessions per game as a sophomore, matching the scoring efficiency numbers he posted in a far smaller role as a freshman. Doing the majority of his scoring one-on-one on the block, the talented Lithuanian big man's aggressiveness and strong feel for the game allowed him to make a consistent impact in the scoring column, including a handful of strong performances against quality competition.


Finishing the year ranked seventh in the country in post-up scoring and third in efficiency according to Synergy Sports Technology, Sabonis combines excellent footwork with tremendous hands, good body control, and nice touch shooting the ball from a variety of angles going right or left. He has a very polished repertoire of moves for a 19 year old big man. Sabonis' experience at the highest level of European basketball were apparent at times over the last two years as his knack for creating angles to receive entry passes, ability to pass out of the post, and awareness to spin off the defense on short rolls are truly impressive.

Shooting a sensational 67% on post ups, Sabonis seldom struggled to make his presence felt on the block at the college level, but he does have some questions to answer as he makes the jump to the next level. The lefty predictably turns over his right shoulder almost exclusively on his initial move, leading to some offensive fouls. His lack of length also raises some concerns about his ability to be as imposing of a weapon as he was in college game where his physical tools were frequently superior to those of the players he was matched up with in WCC play.

The same concerns pop up with regards to Sabonis' ability to finish around the rim in the half court over NBA athleticism. His ability to score from awkward angles, frequently with little spins and scoops, certainly helps his cause, and he did convert a terrific 63% of his attempts inside in the college level, proving particularly effective on put backs, fast breaks, and rolls to the rim, but he struggled some nights to finish consistently in a crowd. Able to play above the rim in space, but lacking elite explosiveness to elevate above traffic, it will be fascinating to see how Sabonis's interior scoring ability translates to the next level, as few players have matched his efficiency in that regard over the last two seasons.

Another area of interest moving forward will be his ability to make strides as a perimeter shooter. Attempting just a handful of jump shots as a freshman, Sabonis expanded his range this season, knocking 22 of the 45 perimeter shots he tossed up in the half court. Shooting the ball with a somewhat slow and rigid, but very compact and seemingly consistent release with little elevation, Sabonis may have some untapped potential as a jump shooter that could shine through and help alleviate the growing pains he experiences inside.

Despite how much time Sabonis spent in the immediate vicinity of the rim last season, he flashed the ability to use his quickness to create a bit from the mid-post area as well. Able to attack closeouts or face-up and drive left to get by defenders who overcommit to defending his jump shot, Sabonis isn't particularly dynamic off the bounce, but his ability to take what the defense gives him is a plus, as is his ability to find cutters and even drive and dish from time to time. He has plenty of room to improve his ability to attack and score with his right hand, but has the skills to blend in nicely to a team's half-court offense with his willingness to move the ball.

Outside of his offensive ability, Sabonis does his best work by far as a rebounder. Ranking among the best per-minute offensive and defensive rebounders in our top-100, the young big man has tremendous instincts and pursues the ball with great intensity as his motor runs consistently hot. Sabonis' toughness and fundamentals make him a terrific area rebounder, while his anticipation allows him to pull down some caroms outside of his area as well compensating for his lack of great explosiveness and then some.


Defensively, Sabonis has a lot of room to grow. Not much of a shot blocker or rim protector in general, his lack of elite quickness and length limits him on this end. He is by no means lead-footed, but has struggled to stay in front of quicker forwards at times over the last two years. He does a decent job defending the post, positioning himself fairly well, but struggles to stay straight up defending shots inside, frequently committing unnecessary fouls as a result of that or when his emotions get the best of him. Not battling quite as hard on this end until shots go up as he does the rest of the game, it will be interesting to see what kind of defensive player Sabonis can be at the next level.

Though he may not be an elite physical specimen, smart, fundamentally sound big men with win-first mentalities like Sabonis frequently provide value at the NBA level with their ability to do the dirty work inside. Playing exceptionally well down the stretch this season, Sabonis left NBA decision-makers with a lot to think about looking very comfortable against likely top-10 pick Jakob Poeltl. His upside may not be as obvious as some of the freakishly big or athletic underclassmen typically coming out of the NCAA ranks, but at just 19 years old, he already has a nice foundation of tools to build upon and may prove more capable against NBA length and athleticism as his game continues to blossom into his 20s.
Read full article

Sabonis doesn't have the flashiest or most exciting game, but he did enough at Nike Academy to help solidify his status as a potential first round pick in the 2016 NBA Draft. Sabonis appeared to have added some more bulk to his frame while still maintaining his excellent mobility that allows him to get up and down in transition, defend the perimeter, and dive hard to the rim out of pick and roll sets.

Sabonis proved more than capable of staying in front of opposing power forwards (and even wings at times) at the camp, which is very important for him as his lack of length and vertical explosiveness limits his ability to spend too many minutes at the center position from a NBA standpoint.

While his mobility was on display defensively, Sabonis kept plays alive on the offensive glass and even led the break in transition at times. Sabonis also had a pair of nice pick and roll finishes where he used his strength to set a bruising screen, rolled hard to the rim and finished with a dunk.

Sabonis was rock solid during the course of the camp, but he still has his warts that limit his upside to an extent from an NBA perspective. Sabonis struggled finishing versus length on several occasions and still plays 15 feet and in for the most part. Although he does have the mobility to attack from the perimeter in a straight line,

Sabonis' lack of shooting touch handcuffs him a bit offensively. He had issues reacting to the defense in short roll situations as his lack of confidence as a shooter and sometimes below average decision making reared its ugly head a on a couple of possessions. His struggles as a shooter combined with his limited potential as a finisher versus length, making it hard to imagine him being a huge scoring threat in the half court outside of put backs and occasional drop offs.

There's a lot to like about Sabonis  strength, mobility, toughness, rebounding ability just to name a few  but he'll have to show he can be more of an offensive threat in the half court to project as anything more than a role player at the NBA level.
Read full article