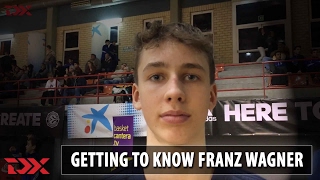 Strengths
-6' 4 at the moment, but expected to grow over the course of the next few years. Long arms, high hips, big feet and hands.
-Frame will out really nicely. Brother, Moritz Wagner who plays at Michigan, is 6'11 240 pounds.
-Fairly fluid athlete, although he's still growing into his body.
-Smooth stroke out to three. As most 15-year-olds do, he has a bit of a low release point with a forward jump, but the ball comes out really nicely. Quick getting into it. Shoots it the same way every time.
-Playing a limited role as the youngest player on the team, he came in and brought defensive energy, sitting down in a stance, working to stay attached to shooters, doing everything he could to keep the ball contained, despite being behind the eight ball physically.
-Has a nice feel for the game. Played within himself. Didn't try to do anything out of the scope of his strengths. Plays point guard on the U16 team. Bodes well for his skill set as he grows.
-Very well spoken kid with a professional approach

Weaknesses
-Good not great athlete, although he has far from reached his athletic potential.
-Didn't appear to be all that gifted with the ball from what we saw. Still improving his ability to play at different speeds and change directions. Can improve his ability to handle ball pressure.
-Didn't shoot it great in game play, just 1-of-7 from three at the ANGT.
-Struggled to defend without fouling at the U18 level

Outlook
It was tough to get a full read on the 15-year-old given the fact that he was at least two years younger than most of his opponents and he played quite a limited role in the 11 minutes per game he did see the floor. With that said, it's not hard to see that Wagner has all of the ingredients to turn into a legitimate NBA prospect in time. If he grows as anticipated, Wagner will already have perimeter skills, a projectable stroke, defensive competitiveness and a nice feel for the game to go along with prototypical wing size. It may take a few years to really see Wagner's impact on the floor versus, but he has everything in place to develop into an intriguing NBA prospect on the wing.