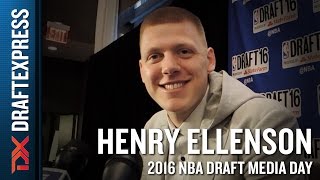 Henry Ellenson had a productive first and lone season of college basketball from an individual standpoint, being named Big East Rookie of the Year, as well as First Team All-Conference.

His team struggled through a fairly disappointing year, though, finishing 8-10 in Big East play, and ending their season in the quarterfinals of the conference tournament after not being invited to the NIT.

Standing 6'10 (possibly a hair taller), with a 7'2 wingspan, a 9'1 standing reach and a mature 240 pound frame, Ellenson has prototypical height, length, reach and strength for a NBA power forward, and is big and strong enough to slide over to the center position in smaller lineups as well. He's also extremely nimble and mobile, showing impressive fluidity and dexterity for a player his size, even if he isn't incredibly quick or explosive in a traditional sense. Staying lean will be important to maintain and possibly improve his athleticism in the long term, as he was much heavier earlier in his career and has a frame that could possibly get out of shape quickly.


At 20 points per-40 minutes, Ellenson ranked among the most prolific freshmen in college basketball this season offensively. Able to put the ball in the basket from virtually anywhere on the floor, his instincts and natural scoring touch are extremely impressive for someone his age.

Ellenson shows potential as a perimeter shooter, knocking down 30 3-pointers in 33 games this season, but is not quite there yet in terms of consistency, hitting just 29% of his attempts. Looking at his shooting mechanics, and the fact that he knocked down 75% of his free throw attempts, it's not difficult to envision him becoming an effective floor spacing big man in time, as his streakiness as a shooter seemed to have more to do with shot-selection than any concerns about his natural ability. He was very effective in the mid-range area, hitting 40% of his attempts on the season there (SST), sometimes pulling up off the dribble impressively, but had a tendency to short-arm many of his 3-point attempts, which often came with a hand in his face.

What separates Ellenson from most big men is the skill-level he demonstrates with the ball in his hands. He's extremely impressive with his ability to put the ball on the floor, not just when grabbing a defensive rebound and going coast to coast, but also in the half-court, using shot-fakes, advanced ball-handling moves and body control to create his own shot and get to the rim.

Ellenson is a real mismatch at his size, something that can probably be utilized even more effectively with NBA spacing, particularly in smaller lineups with multiple shooting options surrounding him. He's the rare big man who can be utilized effectively as the ball-handler in both pick and roll or isolation situations, as he can drive left and right and mix in some impressive change of speed and direction moves. He knows how to slow down and speed up instinctively with his long strides to beat defenders and make his way to the rim, and utilizes outstanding footwork to spin around opponents and finish with soft touch.

Ellenson's strong frame helps him finish through contact, even if he's not incredibly explosive off two feet, and he got to the free throw line an impressive seven times per-40 minutes, which helped compensate for his relatively pedestrian 49.5% 2P%. He's also a very good rebounder, averaging a strong 11.8 per-40. His sturdy frame, excellent hands and terrific timing and anticipation skills all play a role in his prowess as a glass-cleaner, which has been the case virtually everywhere he's been thus far statistically, showing the emphasis he places on this part of his game.

While far more comfortable operating with his face to the basket, Ellenson also shows potential in post-up situations as well, something we may not have seen the best of operating alongside another 6'11 interior player in Luke Fischer. He has the requisite strength needed to establish solid post position, as well as the skill-level needed to create his own shot in the low post and finish with either hand or utilizing turnaround jumpers. He's not what you'd call a high flyer, though, and his struggles finishing around the basket contributed to his inefficiency as a scorer.

While obviously extremely talented, Ellenson is still working on figuring out his limitations and how to operate efficiently offensively on a consistent basis. His 54% TS% leaves something to be desired for a player his size, as he tends to force the issue at times off the dribble and with his shot-selection.


He was never known for his passing ability coming out of high school, and did not always looking like a willing distributor as a freshman, even if his passing metrics are not terrible considering how inefficient Marquette was offensively as a whole this year. It's reasonable to say that his passing ability has plenty of room for growth as the game slows down for him and he's surrounded with better players than he has had thus far in his career. This will be important considering the role he'll likely be asked to play facing the basket on the perimeter, where a lot of offense could be run through him.

The biggest concerns about Ellenson as a NBA prospect revolve around his play on the defensive end. At 6'10, he is somewhat heavy legged stepping out on the perimeter and guarding quicker power forwards, and doesn't show great explosiveness or timing as a rim protector to allow him to anchor a team's defense at the center position.

Ellenson's instincts, awareness and intensity level leaves a lot to be desired defensively, as he's not one to put his body on the line and struggles trying to cover ground on the pick and roll, often looking flat-footed rotating on the back of his heels and getting caught in no man's land. Playing alongside a similarly challenged 6'11 center in a twin-tower lineup didn't do him a lot of favors at the college level, but this is something he'll probably have to deal with at the power forward spot in the NBA as well.

Defensive concerns are likely always going to be a serious issue unless Ellenson makes a real commitment to playing harder and smarter on this end of the floor, something you can't necessarily close the book on considering he's only 19 years old. With that said, the early results thus far haven't been promising.

Ellenson's physical tools, skill-level and natural talent make it very easy to see him finding success at the NBA level offensively, and in a draft like this, he is an easy player to plug into the 5-10 portion of the draft. Just how effective he becomes will largely depend on fit and his ability to become a significantly better defender, but there will always be a place for a big man with his scoring instincts. More DX Scouting Reports and Video Breakdowns:
-LSU's Ben Simmons
-Michigan's Caris LeVert
-Louisville's Damion Lee
-Florida State's Malik Beasley
-Florida's Dorian Finney-Smith
-Cibona's Ante Zizic
-Estudiantes' Juan Hernangomez
-Oakland's Kay Felder
Read full article

Jonathan Givony
@DraftExpress
While other players mature physically and add weight to their frame, Henry Ellenson is getting in better shape and shedding pounds. He's down 12 pounds from this past June and 33 pounds overall from the first time he was weighed by USA Basketball in 2012. At 6-9 ½ without shoes, he's got great size for either the power forward or center position, and is as skilled a big man as you'll find at this age. Ellenson showed terrific ball-handling skills, footwork and perimeter shooting ability, along with the ability to score with either hand around the basket, often using the glass. His defense and shot-selection are things the Marquette coaching staff will want to work on, but it's easy to see why the USA Basketball staff is so high on him, going as far as to compare him to Kevin Love in private conversations.
Read full article