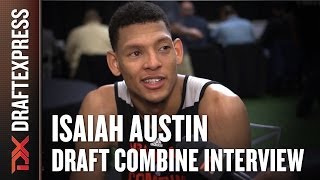 Building a strong resume at the high school level with his size, shooting touch, and defensive presence, Austin finished his prep career ranked among the top-5 players in the RSCI. Considered a potential one-and-done prospect when he entered the college ranks, a solid, but inconsistent freshman season didn't solidify his stock, and his decision to return to Baylor was made for him after a torn labrum promised to keep him from participating in much of the pre-draft process. Taking a step back in some key areas as a sophomore, while improving in others, Austin's draft resume reads largely the same as it did a year ago, as he finds himself firmly on the first round bubble.

Austin's intrigue as a prospect has long hinged on his extremely rare physical attributes. Measuring 7'1 with a 7'3 wingspan at age 16 in 2010, the Texas native has outstanding size for a center at any level to go along with impressive mobility. In contrast, he weighed in at just 200 pounds when those measurements were taken, and while he was listed at 225 this season and has gotten noticeably stronger in his upper body in recent seasons, he remains extremely skinny for a big man at the professional level.

As of right now, Austin's offensive game largely revolves around the small and occasional flashes he shows, as he's not a particularly efficient or reliable at this point in time, but shows intriguing potential in a number of areas.

After averaging 16.7 points per-40 minutes pace adjusted on 45.9% from the field a year ago, he averaged 16.4 on 44.3% as a sophomore, and didn't make significant strides on this end of the floor. Possessing soft touch inside and the ability to score away from the rim, Austin has a unique offensive skill set for a 7-footer, but struggles at times to finish plays around the basket due to his lack of explosiveness and toughness, and forces some difficult, awkward shots from the inside and outside alikepart of the reason he was the least efficient center among all prospects in the DraftExpress Top-100 rankings.

Inside, he'll show deft touch and a high release point on hook shots with either hand at times, but lacks to lower body strength to establish good post position consistently. While he isn't what you'd describe as a freakish athlete, he's mobile and smooth enough to put the ball on the floor a bit from the midrange, and will even knock down a pull-up jump shot from time to time. Shooting a very solid 45% with his back to the basket according to Synergy Sports Technology, Austin has a promising finesse game on the block, but converting at a 53% clip around the rim, he doesn't deal with contact well and tends to take some difficult, off balance shots from the paint.

Away from the rim, Austin's unique skill level gives him interesting potential as a pick-and-pop option. Almost a quarter or his shots in the half court last season were jump shots, off which he made just 32%. Though his consistency leaves something to be desired, he shoots the ball with solid mechanics from the perimeter and seems to have the potential to draw opposing big men away from the rim at the next level, which could become an important part of his offensive profile at the next level.

Austin's length is a plus defensively, but his strength limits his impact on the glass and ability to defend one-on-one. He isn't quick to pursue the ball off the rim, but he shows the mobility necessary to step away from the rim and hold his own from time to time.

Austin put together a very nice NCAA Tournament performance, and while the lack of discernable improvement this season has certainly hurt his perception among scouts, he remains a rare and intriguing talent with his size, skill level, and shot blocking ability, even after revealing that he's blind in one eye. He'll need to improve his efficiency offensively and get significantly stronger to put himself in better position to contribute at the next level in the coming seasons, but will draw interest in the first round and could fit well on a roster that has the luxury of being patient with his long-term development in the next two to three years.

We've taken a more visual look at his strengths and weaknesses thanks to game film from Baylor in the following video scouting report, courtesy of Mike Schmitz.

A player who has made some serious strides both physically and in terms of his mentality, Isaiah Austin had a strong week here in Chicago, even if it's clear that he still has a long ways to go to reach his significant potential.

A legit 7-footer with a gigantic 9-3 standing reach, Austin has obviously put a great deal of work into developing his extremely lanky frame. His upper body looks noticeably stronger, and he continues to move extremely well, even if his high hips and very thin legs remain a concern.

Offensively, Austin has the makings of a versatile skill-set, thanks to his excellent fundamentals. He has some basic post moves in his arsenal which are very effective if strength isn't too much of a concern, as he keeps the ball up high, has solid footwork, and shows excellent touch around the basket, releasing the ball from a vantage point that few can contest.

Additionally, he has good instincts as an offensive rebounder, having the wingspan, hands and agility to go out of his area on a regular basis and secure his team extra possessions.

On the perimeter, Austin has the ability to knock down shots with range out to about 18 feet, as well as solid ball-handling skills for a player his size, at times showing the ability to create his own shot and pull up off the dribble in impressive fashion. He has a good basketball IQ and appears to understand how to play within a team concept, which should make him very easy for Scott Drew to integrate into Baylor's offense next season.

Defensively, Austin is an incredible presence inside the paint with his combination of length and mobility, being extremely difficult to shoot over when rotating from the weak-side when dialed in. He blocks and alters plenty of shots both on and off the ball, which will make him a commodity throughout his career at the center position.

A large part of Austin's development will hinge on the continued development of his frame, particularly his lower body, which is very thin and makes it difficult for him to hold his ground effectively at times inside the paint. This is compounded by the fact that he's not the toughest or most physical big man around, while his high center of gravity makes it difficult for him to bend his knees and move his feet laterally effectively at times.

Obviously still in a very early stage of development, Austin suffers from lapses in intensity on occasion and is still learning how to make his presence felt on both ends of the floor on a consistent basis. He's not always the first to offer up his body and scrap for extra possessions, particularly on the defensive glass, where he could still become more effective boxing out.

A player who is likely many years away from reaching his full potential as a prospect even now, Austin is showing consistent improvement, which is all you can ask for at this stage. It's easy to see why he's so highly regarded, and considering his excellent off-court demeanor and intelligent nature, it appears likely he'll find a good amount of success in basketball eventually.
Read full article

A very intriguing and somewhat frustrating player to watch, there is no doubting the talent level and upside of top-rated recruit Isaiah Austin (ranked #2 by Scout, #2 Rivals, #7 ESPN). Long and lanky, standing 7-feet tall with an exceptional wingspan and a frame that has a LONG ways to go in terms of filling out, Austin has the size of a center, the skill-set of a small forward, and probably weighs less than most point guards do.

Offensively, Austin likes to operate primarily facing the basket, which makes sense when considering the fact that he just doesn't have the strength to hold a spot on the block inside the paint. He likes to shoot jumpers, but sees inconsistent results doing so, and is capable of attacking the basket nicely from beyond the arc. He shows a very nice feel for the game passing the ball to teammates. He has some interesting footwork, but lacks the lower body strength to do much with it at this point, and is almost a sure bet to finish anything he catches around the basket thanks to his excellent hands, mobility and terrific standing reach.

Defensively, Austin lacks much in the ways of fundamentals and is not a particularly tough guy, leaving something to be desired in terms of the intensity he brings to the floor and appearing to be very upright and at times lackadaisical on the perimeter. His motor is just OK, but his talent level is extremely high, as he not only possesses great size and length but also seems to have terrific timing hunting out blocks and steals, both in the paint and on the perimeter, which is interesting to say the least.

Players with Austin's combination of size, length, athleticism and perimeter skills are incredibly rare, which is why he'll always be one of the most coveted prospects in his age group and a near sure-fire pick to play in the NBA down the road. He needs to find a position and improve his frame substantially over the next few years, though, something he has plenty of time to do considering his age.
Read full article