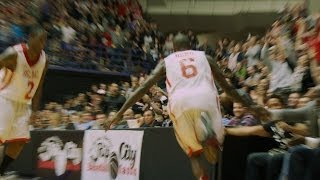 Matt Williams
@DraftExpress
Overview: A very talented offensive-minded shooting guard. Has solid size for the two at 6-4 ½ without shoes. Possesses a terrific 6-10 wingspan. Adds great quickness and leaping ability as well. Shows good lateral quickness defensively. Not very strong, and could stand to add some muscle to his frame. A very capable shooter with the ability to get to the rim. Will tally some assists, but looks for his shot first. Doesnt offer much on the defensive end. Played at the storied Rainier Beach HS in Seattle. Needed only one season at Michigan to propel himself into the lottery. Scored at an impressive rate for a freshman in the Big Ten. Took a couple of seasons to adjust to the NBA, but became a prolific scorer by his fourth season in the League. Brings a lot to the table on the offensive end, but doesnt have the efficiency to be relied on to carry the load. Typically a league-leader in minutes and field goal attempts, but struggles with his shooting percentages and defense. Puts up big per-game numbers on bad teams, and has never played on a winning team in his career. Gives back off the court and has matured quite a bit during his career.

Offense: A talented scorer that puts up great numbers with mediocre efficiency. Gets about half of his offense running pick and rolls and going one-on-one. Will also get some touches as a spot up shooter in drive and dish situations and in transition. Has a nice jump shot with good arc and nice lift. Good three point shooter, but can get streaky. Very good in catch and shoot situations, having the ability to create separation coming off screens and shoot with a hand in his face. Shows the ability to drive in either direction and pull up for jumpers. Not a great shooter when forced to pull up going right, opts to go left much more often. Will over-dribble at times when he doesnt create separation immediately, tending to go right into the heart of the defense and force up some tough running jumpers off-balance. Very good with the ball in his hands, showing great change of direction quickness with his crossover and a lot of nice hesitation moves. Not a great finisher at the rim due to his lack of strength. Still goes to the line at a good rate and isnt entirely averse to taking contact. Shoots a great percentage from the foul line. Does a good job finding his teammates when hes pushing the ball or turning the corner on the pick and roll. Turns the ball over at a fairly low rate due to how heavily he relies on his jump-shot. Will put up great numbers, but is better suited as a complimentary scorer than a leading one.

Defense: Has the lateral quickness and length to a factor, but tends to shy away from taking advantage of his tools when hes not motivated. Comes up with a few steals by virtue of his incredibly quick hands and superb wingspan. Doesnt make hustle plays, but shows some anticipation and timing. Wont show a lot of effort playing defense on the ball. Tends to avoid getting in a low stance, allowing slower players to beat him into the lane. Will go under some screens and has a hard time fighting to get through solid picks on the perimeter. Gets a hand up when his man looks to score, but doesnt get in position to effectively use his length. Usually opts to sag off his man, allowing him to accumulate some mid-to-long rebounds over the course of a game. Isnt a great weakside defender either. Doesnt leave his man, which is a good thing, but closes out very high and will sometimes take himself out of the play. Often winds up having to guard taller players, making it hard for him to be effective. Was much more effective defensively when he was coming off the bench and was playing with a sense of urgency.
Read full article