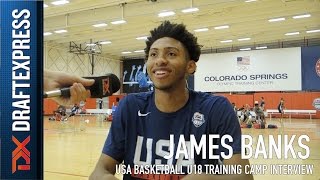 Strengths
-Tremendous physical profile for a center prospect  6'10.5 with a 7'5 wingspan and 9'3 standing reach. Extremely developed 242-pound frame that still has room to grow. Very proportionate frame  tree trunk legs, strong upper body.
-Fairly mobile for his size
-Steadily improving motor and toughness. Shows some relentlessness on the offensive glass. Uses his body to carve out space. Will chase down rebounds outside of his area.
-Has value as a rim protector thanks to his length and compete level. Solid instincts and timing. Blocks shots as a primary and secondary defender. Uses his body well around the rim. Solid understanding of verticality.
-Can make a right handed jump hook. Occasionally shows touch from the free throw line.
-Has made great strides since we first evaluated him at Adidas Nations in 2015
-Well spoken with a vibrant personality

Weaknesses
-More long than explosive, which limits him as a finisher and rebounder in traffic. Plays mostly below the rim from a standstill despite his elite length. Slightly knock kneed. Can be a bit uncoordinated at times.
-Very limited offensively  10.6 points per 40 minutes on 49.2% from two in 28 Adidas games. Bobbles passes. Doesn't have great touch or much in terms of go-to moves. Limited to put backs and uncontested finishes. Plays five feet in.
-Feel for the game is a work in progress  9 assists and 26 turnovers in 516 minutes. Strong motor but can improve his timing and instincts on the defensive glass.
-Has room to improve his defensive fundamentals, especially on the perimeter.
-Has improved considerably but still has a long way to go in terms of refining his skills, becoming a threat as a scorer and improving his feel for the game.

Outlook Banks, who at times in the past has been more prospect than player, showed great improvement, notably in terms of consistent effort, physicality and rim protection. His physical tools speak for themselves, and it was good to see the Georgia native putting them to good use on the defensive end. He's still a ways away from being much more than an energy big off the bench, but his progress is most certainly a positive as he heads to Austin to play for head coach Shaka Smart. Any player with Banks' physical profile is an NBA prospect, and it will be interesting to see how he develops under Smart, and alongside Jarrett Allen, over the next few years.

Strengths:
-Really strong base. Good upper body that will continue to fill out. Wide shoulders.
-Long arms. Big hands.
-Solid offensive rebounder (career 3.6 per-40)
-Moves well laterally. Can contain the ball in pick and roll or hedge and recover. Has quick enough feet to eventually guard power forwards on defense.
-Solid timing as a shot blocker. Career 2.7 blocks per 40 minutes pace adjusted. Not a freak athlete but long and mobile enough to meet opponents at the rim.
-Solid fundamentals on defense, especially given the fact that he's only been playing basketball for a couple of years.
-Doesn't force the issue on offense. Knows his limitations.
-Solid shooting mechanics from the line. Should be able to develop a mid-range game in time.

Weaknesses:
-Good not great athlete. Tends to lumber a bit getting up and down the floor.
-Not much of a threat to score outside of put backs. Hands are a little shaky. No post game. Gets swallowed up inside at times.
-Limited offensive player in general. Averaged just 10.7 points per-40 minutes this summer, which is a very low rate. Did so on poor efficiency at that, just 50% for 2
-Average feel for the game. Dishes out two and a half times as many turnovers as assists. Almost never gets in the passing lanes (.6 steals per-40) despite his length
-Lacks a level of toughness. Not a physical guy despite his excellent frame. Doesn't set strong screens.
-Doesn't defensive rebound like you would hope. 5.5 defensive rebounds per-40. Stands around too often. Can do a better job finding a body then attacking the rebound.

Outlook:
A quarterback growing up, who only recently converted to playing basketball full time, right now Banks looks the part of high-level prospect more than he plays the part. There isn't a ton to Banks' game at this stage, but he has a very good frame, a strong base, long arms, some shot blocking ability, good feet, and has only been playing basketball for two years, making him worth tracking as he continues to develop as a prospect.