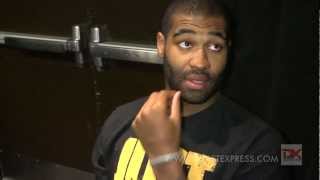 Matt Williams
@DraftExpress
The product of nearby Norfolk State, Kyle O'Quinn followed up his impressive NCAA Tournament performance with a terrific showing at the Portsmouth Invitational Tournament. Utilizing his tremendous 7'5 wingspan, O'Quinn could not lead his team to a victory in the Championship Game, but he did garner MVP honors nonetheless. Averaging 11.7 rebounds (3rd best at PIT) and 3.7 blocks (2nd) per-game, O'Quinn's most eye-opening contributions came on the defensive end, where his length allowed him to make a significant impact. He's not an exceptional leaper, but his chiseled frame, incredibly long wingspan and excellent timing made a huge difference for his team.

On the offensive end, O'Quinn finished consistently, but still needs to improve his polish as a post scorer and jump shooter. The center also impressed with his passing ability, seeing holes in the defense and using his high basketball IQ to find an angle to get the ball to open cutters. Though O'Quinn has been at no loss for exposure after Norfolk State's upset of Missouri, there were some question marks about how his production might translate against similarly sized opponents in the NBA. He did an outstanding job putting those to rest, as it was clear that he's one of the best players in the tournament from the moment he stepped on the floor.

The PIT was a chance for O'Quinn to continue his momentum moving towards the draft, and though he struggled to score in the PIT final, his impact here was certainly another major step in the right direction.
Read full article

DraftExpress
@DraftExpress
Kyle O'Quinn measured out exceptionally well for a NBA big man prospect, at 6-8 ¾ without shoes, 241 pounds and a gigantic 7-5 wingspan. While he's not a particularly explosive athlete, he should have no problem playing either big man spot in the NBA.
Read full article

After leading Norfolk State to its first NCAA Tournament in school history, big man Kyle O'Quinn continued an already memorable senior season by powering #15 seed Spartans to victory against #2 seed Missouri. O'Quinn posted 26 points, 14 rebounds, and 2 blocks on college basketball's biggest stage in one of the most shocking upsets in NCAA Tournament history against Ricardo Ratliffe, a legitimate prospect in his own right. Though Florida would ultimately shut down O'Quinn and end Norfolk State's tournament run in the round of 32, O'Quinn validated many of the strengths and weaknesses we observed last November, though against superior competition.

At first sight, O'Quinn more than looks the part of a NBA big man, standing 6'10 with a solid 240-pound frame and a long wingspan. He is a below average athlete at best, however, lacking much in the way of standout quickness or explosiveness. While this was hardly exposed against MEAC opponents, his struggles against Florida and Marquette, in particular, seem to be fairly prescient of the trouble he may have adjusting athletically to the next level.

On offense, O'Quinn is a versatile, albeit unorthodox player, demonstrating the ability to score around the basket and from the perimeter while averaging 19.5 points per 40 minutes pace adjusted and shooting an incredibly efficient 61% from inside of the arc.

Nearly 30% of his offensive possessions come in the post, where, according to Synergy Sports Tech, he converts a solid 54.8% of his attempts. On film, O'Quinn still shows a solid arsenal of post moves with his back to the basket, even if his lack of quickness and explosiveness remains a significant concern projecting to the next level. So too does the fact that he struggled so mightily against Florida and Marquette's post defense, where he wasn't able to simply bully his opponents with sheer strength the way he's accustomed to. O'Quinn looks excellent in the post against weaker MEAC competition, but with few exceptions he remains largely unproven against NBA-caliber post defenders.

Another area of concern is his unorthodox perimeter game. By the numbers, O'Quinn is an awful perimeter shooter, connecting on just 18.8% of his attempts and failing to crack 30% shooting since his freshman year. As we have expressed in the past, his miserable shot selection seems to be the primary culprit, though he could certainly stand to develop more consistent shooting mechanics. Moving inside of the arc, he a bit more successful, occasionally showing the ability to knock down spot-up jump shots from mid-range.

Also worth mentioning is his much-improved aggressiveness and focus in the post in the post, reflected in his career high 7.6 free throw attempts per 40 minutes pace adjusted and his willingness to take the ball stronger to the rim, He has also done a better job of moving without the ball this season, as well, and does a good job of finishing off of cuts.

The only way to classify O'Quinn's offense is as unorthodox because he tries to do so much with mixed results and it still remains to be seen what exactly he'll be able to do consistently against NBA-caliber defenders. We likely will not see him launching contested 30-footers or taking his man off of the dribble from the perimeter at the next level, but O'Quinn's ability to hit mid-range jump shots, crash the offense boards, and finish off cuts are all legitimate, coveted skills.

On defense, O'Quinn is a mixed bag, as he dominated subpar competition on a nightly basis for almost four years with a very limited sample size of what he can actually do against high-major competition. In games against Florida, Missouri, Marquette, and Virginia Tech, O'Quinn strung together impressive defensive possessions, but struggled to maintain his focus. In general, he seemingly lacks the lateral quickness to guard more perimeter-oriented big men and his general awareness does not look great. Furthermore, he struggles to close out on shooters, looking slow-footed and uninterested at times.

That being said, he is an excellent shot blocker, largely because of his long wingspan, and his 3.3 blocks per 40 minutes pace adjusted, for the second straight year, ranks him amongst the top players in our database for the second consecutive year. .

While he was an fringe prospect coming into this season, he is certainly on scouts radars now. Far from being an elite prospect, O'Quinn is an ideal player for the Portsmouth Invitational Tournament, where scouts will be watching to see if he can continue to score and rebound while showing improved decision making against better competition. In addition to good showings in Portsmouth and in private workouts, he should also prioritize improving his conditioning, so as to maximize both his physical and athletic potential. His NCAA tournament performance was revealing, but it is within a larger body of work and O'Quinn still has quite a bit of work to do before he's a lock to hear his name called on draft night.
Read full article

Norfolk State big man Kyle O'Quinn has made gradual improvement over the course of his collegiate career, and will look to continue that improvement in his senior season to put himself on the radar of NBA scouts. O'Quinn's impressive averages of 16.4 ppg, 11.1 rpg, and 3.4 bpg on 55.6% from the field earned him first team all-conference honors in the MEAC last season.

Standing 6'10 and 240 pounds with what appears to be long wingspan, O'Quinn has nice size for an NBA big man prospect. While not a particularly explosive athlete, he does move fluidly and has good mobility for a player his size. His lack of energy and intensity on a consistent basis is a concern, but he is the most talented big man on the floor most every night in the MEAC, and he's able to dominate in the paint on both ends regardless of how much effort he puts forth.

Offensively, O'Quinn does much of his damage in the post, converting an efficient 63% of his 2-point attempts, displaying a nice array of moves and a fairly polished skill set in one on one situations. Where he gets himself into trouble is when the defense collapses on him, He draws so much attention from opposing teams' defenses, but he lacks the awareness and passing ability out of the post, showing that his feel for the game is still a work in a progress.

O'Quinn has shown the ability to step out on the perimeter as well, but his shot selection was horrific at times last season, far too often settling for long range jumpers. He connected on a poor 25% of his jump shots as a junior, and only 24% of his 3-pointers, attempting two per game. He has a decent stroke, as shown by the fact that he shot a solid 76% from the free throw line, but most of his jumpers seem to be a result of boredom or out of frustration if he doesn't touch the ball for a few possessions. He can turn his shooting ability into an asset, but he'll need to get much better at recognizing what is a good shot.

On the defensive end, O'Quinn is an enforcer in the paint, and was named Defensive Player of the Year in the MEAC last season. Being the most physically gifted big man on the floor most every night, he's able to block or alter shots in the paint as a help defender and clean up on the defensive boards. He's also able to get away with not always fighting for positioning and playing good fundamental defense at a lower level of competition, but he'll likely need to make some serious adjustments against NBA caliber players, and show a much higher level of focus and toughness.

Overall, O'Quinn has good size and a versatile skill set for a player his size, and has shown to be very productive at the college level, albeit in a weak conference. A dominating senior season might help to boost his stock, but he tends to coast at times, and the lack of talent he faces on a regular basis makes it difficult to project how well his game might translate against a much higher level of competition. Getting drafted next summer will be an uphill battle, but he'll likely get his chance to prove his worth through the pre-draft process in workouts and at Portsmouth.
Read full article