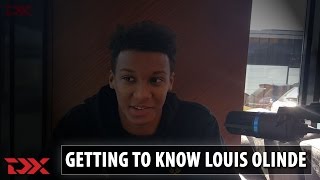 Strengths:
-Has great size for a small forward at 6'9 (possibly without shoes) with a 7'1 wingspan
-Fluid athlete
-Shows nice versatility in many different facets, on both ends of the floor
-Can get low with his dribble and attack the rim smoothly in a straight line. Has soft touch around the basket
-Can operate without the ball and make intelligent cuts to the rim for easy baskets
-Shows some ability to makes plays defensively using his mobility and length.
-Averaged 12 rebounds per-40 at the U18s, mostly playing on the perimeter
-Will throw in an occasional outside shot given time and space. Hit all three of his 3-point attempts at the U18s
-Still at a very early stage of his development physically and skill-wise. Has significant upside to continue to improve athletically as well as increase his polish

Weaknesses:
-More smooth than explosive. Very narrow and upright. Really struggles to play above the rim.
-How will his frame will out in the long term? Very frail in the lower body in particular, but also doesn't have very wide shoulders
-Has great height, but doesn't have the ability or mentality to use it at this stage, which somewhat negates his size advantage
-Fairly limited offensive player overall. Scored just 226 points in 975 minutes in 48 games in the DX database (9.2 points per-40).
-Not a great shooter at this stage. Has a slow, low and somewhat mechanical release on his jumper. Not the most fluid looking stroke around. Career 11/41 3P and 65% FT% in 48 games.
- Limited ball-handler. Strictly a straight-line driver. Can't really go anywhere with the ball when he needs to create space in the half-court. Struggles to handle ball-pressure at times.
-Doesn't show much explosiveness in traffic. Struggles to finish through contact. Doesn't draw many fouls
-Just an average defender. Gives up deep post position and gets scored on by smaller players. Can't avoid getting backed down by stronger players, making it difficult to utilize him in a stretch-4 capacity. Needs to get tougher on this end of the floor

Outlook: Son of ex-UCLA player Wilbert Olinde, who won a NCAA Championship under John Wooden and was a longtime pro in Germany. Started off the tournament very strong, but tallied off towards the end like the entire U18 German national team. Has some very promising tools and shows budding versatility in a few different areas, but is still at a very early stage of maturation. Already made his debut in First Division Germany with Bamberg, where he signed a long-term deal this past summer.
Read full article

Getting to Know: Louis Olinde

Bogdan Karaicic
@bhoops2016
German forward Louis Olinde discusses his strengths and weaknesses at the U18 European Championship, with accompanying video from the tournament overlayed.