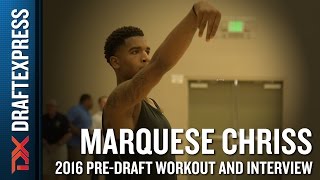 A late bloomer who has only been playing competitively for a few years, Marquese Chriss surprised many by developing into one of the most productive freshmen in his class in his lone season of college basketball.

Chriss is one of the most physically gifted prospects you'll find, possessing an exhilarating combination of quickness, explosiveness and body control that makes him a highlight reel candidate anytime he steps on the floor. He's very upright in his running style, but is extremely light on his feet, has a very quick second bounce, and can finish around the rim from impressive distances, often looking like he's barely breaking a sweat.

Chriss is more than just a freak athlete, though, as he has the makings of an ideal skill-set for a modern day NBA power forward.

That starts with his ability to stretch the floor from beyond the 3-point line, where Chriss made a solid 21/60 (35%) of his attempts. He has a compact stroke, and natural touch on his shot, being capable both with his feet set and even off the dribble in small doses. He could possibly stand to raise his release point a bit, and not contort his body on his release, but there's no question he has legit range on his jumper and will be able to develop into an even better shooter down the road as he's able to perfect his technique.

Chriss also shows the ability to attack his man off the dribble with a strong first step, while driving in either direction. He shows impressive footwork and body control with his spin moves, and excellent timing attacking closeouts, even though his ball-handling skills are a work in progress and his reluctance to finish with his left hand sometimes put him in awkward situations around the rim.

Chriss shows some semblance of a post game, mainly with his ability to shoot turnaround jumpers and right-handed hook shots with very soft touch from unique angles. He tends to shy away from contact at times, and is still working on developing the strength and footwork needed to utilize his outstanding combination of quickness and explosiveness on a full-time basis, but he has great potential operating in the mid-post area. He'll be very difficult to handle facing up in that range for most power forwards with his ability to make jumpers and blow by opponents with his terrific first step.

Chriss also shows strong potential as a roll-man and cutter, with his very soft hands and ability to get up the floor in the blink of an eye to make plays above the rim. He doesn't always show the best feel for playing off the ball, and is inconsistent with the effort he shows sprinting to the rim, but has the tools to be a very good finisher if he wants to.

One area teams will want to see Chriss develop to be a full-time perimeter oriented forward is with his passing ability. His assist percentage and pure point rating both rank fourth worst among the 22 collegiate power forwards in our Top-100 rankings. His lack of experience comes into play here, having only a couple of years of experience playing competitive basketball under his belt, but so does his feel for the game, which appears to be average at best right now.

Where that tends to show up the most vividly right now is as on the defensive glass. At 4.1 rebounds per-40, Chriss ranks among the least prolific power forwards in NBA Draft history according to our database. Among first round picks, only Thaddeus Young (who played mostly SF in college) had a worse defensive rebounding rate in the draft's last 30 years. Chriss almost never puts a body on opposing big men in an attempt to box out and prepare for loose balls coming off the glass, and his relatively small standing reach (measured at 8'9, comparable with most small forwards) didn't help matters much. In addition to his instincts, his motor here leaves a lot to be desired as well, as if at times appears he's operating at half speed, and far more focused on his work on the offensive end.

Not surprisingly, that translates to the rest of his play defensively. He has the quickness needed to stay in front of nearly everyone he encounters, and the explosiveness to block a decent amount of shots, but lacks the fundamentals, discipline and consistent effort required to take advantage of that. Opposing coaching staffs regularly targeted him in isolation situations, and found a lot of success doing so, as he would typically either commit a foul or give up a basket.

Chriss was one of the most foul prone players in college basketball, being disqualified from 15 of his 34 games, and committing four fouls in ten others. Many of his fouls seemed highly unnecessary, particularly early in the season, and appeared to be almost entirely due to a lack of focus.

In today's NBA, many teams want to see their power forwards being able to hold their own as small-ball centers, and it's not clear that he has the frame, length or reach to be overly effective at that. While he isn't undersized in terms of his pure height, he has a long neck that makes him appear a little taller on paper than he actually plays. He may actually find more success on the wing, using his terrific quickness and mobility, than he would on the block defending legit big men, but that's a little more difficult to configure lineup wise and thus not as big of an advantage as in the past.

One of the youngest players in the draft, not turning 19 until July, Chriss has quite a bit of innate talent that is easy to get excited about, but also some significant red flags on and off the court. He's a long ways away from reaching his full potential at the moment, with his inconsistent motor, approach to the game, and how emotional he appears at times. He is undoubtedly a long term project with tremendous tools, but will need to find the right situation and coaching staff to find success down the road. With that said, his tremendous frame, combined with his ability to shoot 3-pointers and make freakishly athletic plays will steal many hearts in the NBA pre-draft workout process (and beyond), and could allow him to gain quite a bit of steam as we get closer to June.More DX Scouting Reports and Video Breakdowns:
-Kansas' Cheick Diallo
-Washington's Dejounte Murray
-Baylor's Taurean Prince
-Michigan State's Denzel Valentine
-UNLV's Stephen Zimmerman
-Marquette's Henry Ellenson
-LSU's Ben Simmons
-Michigan's Caris LeVert
-Louisville's Damion Lee
-Florida State's Malik Beasley
-Florida's Dorian Finney-Smith
-Cibona's Ante Zizic
-Estudiantes' Juan Hernangomez
-Oakland's Kay Felder
Read full article