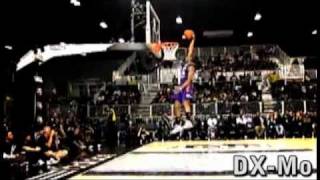 A great athlete with a monster wingspan, Marqus Blakely certainly looks the part of NBA wing prospect, but his skill level and feel for the game at that position are still struggling to catch up as he makes the transition from power forward.

Blakely is pretty limited in the halfcourt at the moment, having to deal with collapsing defenses whenever he does get the chance to put the ball on the floor given his team's makeup. He still manages to contribute in a variety of areas, however, putting his non-stop motor and hustle to good work crashing the glass on both ends, getting out in transition, and playing hard defense both on and off the ball.

While he's still clearly a work in progress and will likely need to make some strides offensively in order to make it in the NBA long term, he already got a good look from the Clippers in preseason and brings quite a few nice things to the table with his physical tools and defense. Playing the type of hustle game that coaches love certainly helps matters, but developing into at least a respectable spot-up shooter is the best thing Blakely could do to improve his chances at getting more looks in the NBA down the road.
Read full article

Jonathan Givony
@DraftExpress
If a stat existed for wingspan to size ratio, the leader from this Portsmouth class would surely be Vermonts Marqus Blakely. Measuring a shade under 6-5 without shoes, Blakely possesses a freakish 7-1 wingspan, which when combined with his NCAA dunk-contest winning athleticism, helps explain why he was such an awesome rebounder, shot-blocker and ball-thief in college. For comparisons sake, Blakelys arms are just as long or longer than players like Joakim Noah, Al Horford, Drew Gooden and Charlie Villanueva. While his offense clearly has a long ways to go, his physical attributes, intensity level, versatility and above average basketball IQ (he also averaged nearly 4 assists per game) makes him someone to keep an eye on for the future, possibly as a Luc Richard Mbah a Moute type prospect.
Read full article

Joseph Treutlein
@DraftExpress
Marqus Blakely may not have put up eye-popping statistics (6 points, 8 rebounds, 19 minutes) in his teams blowout 90-56 victory, but he provided quite a bit of intrigue in a very dull game, showing some of the best physical tools of any of the players in attendance. Blakely is a chiseled 6-6 athlete who competes on every possession, crashes the glass hard and has terrific potential on the defensive end. His perimeter skills appear to be a serious work in progress, but he seems to be a smart and unselfish player who is still very far from being a finished product at this point in time. If anything, Blakely got his name written into the notebooks of a couple of NBA scouts who previously werent familiar with him, and possibly earned himself a couple more workouts in the process. Well keep watching him as the week moves on.
Read full article

Joey Whelan
@DraftExpress
Blakely is likely the best power forward statistically that you've never heard of, exhibited by his being named the America East Player of the Year as just a sophomore. A secret no more, he has already been voted as the preseason favorite to hold that title for 08-09.

What stands out the most about Blakely is his remarkable productivity. Averaging 19 points, 11 rebounds, 2.3 assists, 2.0 steals, and 2.7 blocks while shooting 55% from the field, he put up the best number across the board of any returning post player not named Tyler Hansbrough or Luke Harangody last season. In his lone game this season (a one point loss to George Mason), he kept it up with a 24 point, 8 rebound, 4 block, 4 steal performance. Simply put, there are few players in the nation that can match his output statistically.

The obvious physical limitations surrounding Blakely center around the fact that he is a 6'5 post player. He appears to have an above average wingspan, but nothing freakish by any means. A very good run-jump athlete, the junior's leaping ability helps him against taller foes at his level, but is likely not enough to compensate for his lack of height against legit draft prospects.

The bulk of Blakely's scoring comes from within 8 feet of the basket, where he does his damage via a number of nifty finishes around the rim. Understanding how to use his body, the junior draws a huge number of fouls as seen by the ridiculous 9.3 free throws per game he attempted last year. Given his athleticism, he often beats less mobile big men with a number of quick post moves and even occasionally will step out and show off his nice first step off of the dribble. Blakely also gets his fair share of points via stickbacks from offensive rebounds, where he averaged an impressive 3.8 per game as a sophomore. Equally as impressive as his ability to crash the glass is his court vision, which looks outstanding for a player playing in the pivot.

Ball handling and shooting are two areas that Marqus will desperately need to improve upon if he hopes of having a chance of making the NBA at his size. Looking uncomfortable handling the ball, he rarely put the ball on the floor more than two times in a straight line going to the basket last season. His shooting is even more of a concern, given that he hasn't even shown a reliable jumpshot from 15 feet yet at this point. Blakely's improvement on the perimeter over the next two years will be crucial in the amount of interest he receives as a prospect when the time comes.

There is a bit of intrigue with Marqus on the defensive end. Although he has the offensive game of a four man, he is perfectly capable of guarding both forward positions in his conference. Granted that we have not had the chance to evaluate him against any high major prospects, he appears to have the lateral quickness to keep up at this point. The aforementioned quickness also translates into the New Jersey native's leaping ability, where he swatted almost three shots per game at only 6'5. Combine that with his tendency to get out in the passing lanes, and you have yourself a pretty interesting defender.

Blakely has a motor that is non-stop, as shown by his talents in regards to rebounding the basketball. He runs the floor well on both ends and is not afraid to mix it up with bigger foes. As far as work ethic and desire are concerned, we seem to be looking at a player who gives his all every time he steps on the court.

While undersized power forwards such as Jason Maxiell, Leon Powe, and Craig Smith have all proved to be very productive NBA players over the last few years, Blakely is smaller and nowhere near as strong as the three aforementioned brutes. We're looking at a player who will likely receive an invite to Portsmouth when it's all said and done, and is already looking like he could be a successful European player if the NBA doesn't work out for him. If he can find a way to develop a reliable jump-shot with his feet set and begin knocking down 3-pointers at a decent rate, there may be more to talk about regarding the NBA down the road.
Read full article