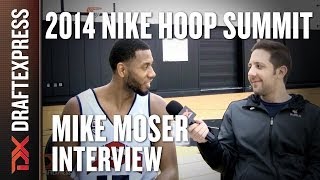 A look back on Mike Moser's college career and, by extension, his draft stock reveals one of the stranger cases in recent memory. Moser entered UCLA ranked by the RSCI as the 64th best prospect in the Class of 2009. After playing sparingly in 15 games during his freshman season at UCLA, Moser transferred to UNLV, sat out a year, and emerged as one of the biggest surprises in the 2011-2012 season, averaging a double-double on his way to earning First Team All-MWC and Honorable Mention All-American honors. At his peak in December 2011, we projected him as a first round pick, though his stock came down to Earth by the end of the season.

Moser struggled as a junior, however, as persistent hip and elbow injuries, in addition to team chemistry issues resulted in significant steps back in every statistical category and efficiency metric, lower shooting percentages, and a very different role on the offensive end of the floor, highlighted by a nearly 40% decrease in usage rate. While many commended Moser on his decision to return to school after his breakout sophomore year, his draft stock had plummeted by the end of his junior season.

After graduating from UNLV with eligibility to spare, Moser elected to transfer to Oregon, where he slowly, but surely got his career back on track. He found his shooting touch, established himself as Oregon's starting power forward, and earned Honorable Mention All-Pac-12 honors on an Oregon team that finished 24-10 and won a game in the NCAA Tournament. Now at age 23, a few years removed from significant draft hype, does Moser still have a shot at cracking an NBA rotation?

From a physical perspective, Moser remains an intriguing prospect at the small forward position, as he stands around 6'8 with a 7'0.25 wingspan. His 204-pound frame, particularly his skinny lower body, likely limits his potential somewhat, but is something he can continue to work on in time. Additionally, while Moser is a good athlete, he is by no means elite relative to either small forward or power forward prospects. He is smoother than he is explosive without a jaw dropping first step or elite handles to allow him to compensate. He does run the floor very well and is extremely fluid overall, but he is likely an above average athlete at best as a professional.

On the offensive end of the floor, his senior year at Oregon, more so than his celebrated sophomore and maligned junior seasons at UNLV, tells scouts quite a bit about the type of role that he can fill at the next level. Moser averaged a career high 17.5 points per 40 minutes pace adjusted while shooting a career high 51.4% 2FG and 37.8% 3FG.

Moser's best chances of making it in the NBA revolve around his ability to stretch the floor from the perimeter, be it at the small forward or power forward position in smaller lineups. He was more consistent this past season than he's ever been in his career, which is extremely important for his pro potential. He made 40.1% of his overall jump shots, including 42% of his catch-and-shoot attempts  while being equally effective both guarded and unguarded  alongside of his aforementioned career high 37.8% 3FG.

Moser demonstrated much improved shooting mechanics including both a fairly quick release and high release point, which along with his length, size, and elevation should translate well to the next level. He makes shots in ways that spot-up shooting combo-forwards are expected to at the next level, which is certainly promising given his collegiate trajectory as a perimeter shooter (9.1%-to-33.8%-to-26.7%-to-37.8%) and a jump shooter more generally.

That he made 36.8% of his shots off of the dribble does not hurt, either, though his 38 attempts provides an admittedly limited sample size. Likewise and while his increased percentages are certainly intriguing, he is a subpar ball-handler, his first step is right around average, and he does not seem to possess the type of shot creation instincts that suggest that he can grow significantly in this capacity at the next level. He is, however, a good scorer around the basket. Not one to explode to the rim, Moser shows an above average shooting touch to the tune of 52.6% FG, utilizing his agility and solid body control to his advantage, and even seems to have the versatility to operate in a face-up power forward capacity for stretches at the next level.

His ball handling ability, however, limits other aspects of his game, including his effectiveness as a slasher, to the point where he struggles to do much without a clear path to the basket. Along these lines, he attempts a poor and puzzling 2.8 free throws per 40 minutes pace adjusted. That said, he does a good job of using his quickness and agility to breeze by slower players and cut through gaps in opposing post defenses. He also sees the floor well, anticipates (and avoids) contact, and moves well without the ball in half court sets. That he tends to drift toward and around the perimeter seems to both be partially explained by Oregon's stagnant half-court offense and should be far less of a problem as a role player off of the bench, particularly as a small forward.

Yet, his offensive skill set matters very little if his defense is not NBA-caliber. As a senior, Moser traded off guarding perimeter and post players, and found mixed success. On the one hand, Moser's lateral quickness looks above average and his fundamentals remain a significant work in progress three years since our last evaluation. For a prospect stuck between positions, for instance, it's concerning that he struggles so mightily to close out perimeter shooters or guard the pick-and-roll.

That being said, Moser uses his physical gifts quite well, getting his hands on loose balls, disrupting passing lanes with his length, and making plays all over the floor. Likewise, Moser has remained a solid rebounder since his incredible sophomore season and he ranked 13th among prospects in our top-100 to the tune of 7.8 defensive rebounds per 40 minutes pace adjusted while grabbing 25% of Oregon's overall defensive boards. Continuing to play with the same toughness and intensity is essential for Moser, as the potential is and has been there for quite some time.

Somewhat paradoxically, Mike Moser is arguably a better NBA prospect today than after his breakout sophomore season. He is no longer trying to do too much, and his versatility is more functional; he now brings distinct skills to the table that could allow him to carve out a niche at the next level. He is more efficient, less turnover prone and improved his shooting across the board while continuing to rebound. That he is 23 going on 24-years-old in November and possesses neither elite athleticism nor lockdown defensive instincts is something that scouts will need to consider. Just how much room he has left to grow remains to be seen; phrased differently: if he is what he is, then is he an NBA player?

That being said, it appears that he has been building some steady draft buzz with solid performances at pre-draft workouts. It would not be surprising at all to see Moser get some looks in the later second round should he continue to perform well in workouts. After a down year at UNLV and toiling in relative anonymity at Oregon, it would seem that Mike Moser's career is finally back on track.
Read full article

Mike Schmitz
@Mike_Schmitz
Mike Moser, 6 points, 9 rebounds, 1 block, 3-for-6 FGs, 0-for-1 3FGs
Moser didn't quite get it going from the perimeter and showed his limitations as a shot-creator, but he did a nice job making plays on the defensive end and controlled the defensive glass. He's long and athletic and can shoot the ball, which are all skills NBA teams covet considering his excellent size.
Read full article

After playing less than 5 minutes per game in just 15 contests for a 14-18 UCLA squad as a freshman in 2009-2010, Mike Moser sat out last season as a redshirt transfer at UNLV. Through sixteen games as a sophomore in 2011-2012, that move looks to have paid off, as he's off to a fantastic start to the season, producing at a high level against a very competitive early-season schedule.

Moser plays as a face-up power forward for Coach Dave Rice at UNLV and could be viewed that way by some NBA teams for his future prospects, but as a smooth 6'8 athlete with a long, developing frame, he should also be able to slide over to small forward as he adds polish to his perimeter skills, where he stacks up well from a physical standpoint with his excellent quickness and explosiveness.

Perhaps Moser's biggest impact this season has been on the boards, where his 15 rebounds per forty minutes places him in the top five of all prospects in our database. Despite not being the strongest or bulkiest of players around the basket, he's bouncy, and shows an excellent activity level and nose for the ball. Often able to outquick opponents in pursuit of loose balls, Moser regularly goes out of his area with his long wingspan. This is clearly a skill that he can hang his hat on as he refines his skill-set and establishes the best way to utilize his talents in a NBA game.

On the offensive end, Moser has proven to be a matchup nightmare at the power forward spot for some teams, utilizing his versatility, where he's able to get out in transition, finish around the rim, and crash the offensive glass. If the situation calls for it he can also step out the perimeter and make spot-up and pick-and-pop jumpers, or attack slower players off the bounce in a straight line.

Much of Moser's versatility is highlighted in transition, where he shows the ability to handle the ball and attack the basket or utilize his court vision to find a teammate. When filling the lanes, his excellent athleticism allows him to beat his man down the floor and finish at the rim, while he can also run to the arc to spot up and knock down shots from 3-point range.

Moser is shooting just 34% from 3-point range so far, and he doesn't have the smoothest release, but he doesn't lack any confidence as a shooter and has shown in spurts that he's capable of getting hot from behind the arc, including making 6 of 9 attempts against Santa Barbara and going 3-4 against Cal. If he continues to put in the work on his jump shot, while becoming a bit more selective with when to fire away from deep, he'll have the opportunity to make himself into a reliable 3-point threat.

Defensively, Moser needs some work to be able to compete at the NBA level. His lack of bulk, particularly in the lower body, hurts him when defending in the post, as bigger, stronger players are able to establish position against him and muscle him around. His length and athleticism could allow him to eventually defend NBA small forwards, but he'll need to improve his defensive fundamentals and get used to chasing players around on the perimeter.

Moser's physical profile gives him a nice framework to build on defensively, though, and he's shown that he's capable of being disruptive and causing turnovers, as evidenced by his 2.3 steals per forty minutes, which ranks him among the top 5 power forwards in our database.

Overall, Moser has been one of the most pleasant surprises in college basketball thus far, and although his identity as an NBA player may still be uncertain, his length, athleticism, versatile skill set, and rebounding prowess make him a very intriguing player for teams to continue to evaluate throughout the season.

His UNLV team has the size, depth, talent and experience to compete with anybody, so Moser may have the opportunity to showcase his game on the big stage, where he and the Rebels will try to make some noise in the NCAA tournament.
Read full article