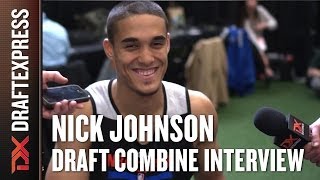 Johnson, the third year guard out of Arizona is looking to find his way back into the NBA after being drafted in the second round by the Rockets back in 2014, being traded to Denver, then being released and spending last year with the Austin Spurs. Johnson's game has struggled to transition to the pro level where he has played in between both guard positions, not finding a consistent role. In Orlando, Johnson ran the point for the Orlando Blue, leading the League in assists at 7.4 per game, fifth all time behind Raymond Felton's 8.0 in 2007, while also posting a solid 4.84 PPR. Johnson has the size and athletic ability to be an NBA player but he has yet to find his niche, as he has struggled to score efficiently as evidenced by his 48% TS% in the D-League this season. Johnson's outside shot and decision making skills will need to continue to evolve as he attempts to show he is worthy of earning a long term spot in the NBA.
Read full article

Nick Johnson's Arizona career came to a somewhat disappointing end in a 64-63 West Regional Final loss to the second seeded Wisconsin Badgers, as he was called for an offensive foul with 3.2 seconds left with the Wildcats down one. A consensus First Team All-American, Johnson took a major step forward as a junior, averaging 16.3 points and 4.1 rebounds per-game, solidifying himself as a legitimate NBA prospect in the process.

Though Johnson took a big step forward in terms of productivity and emerged as a leader for one of the nation's best teams, his primary weakness as a prospect remains unchanged. Standing just 6'2.5 with a 6'5.5 wingspan, he is undersized for the shooting guard position. Not a natural playmaker, Johnson will face legitimate questions as to where he fits in at the NBA level throughout the draft process, but has done some nice things in other areas to give himself a fighting chance at carving out a niche.

Aside from his lack of size, there's quite a few things to like about Johnson on both ends of the floor. First and foremost, he's an absolutely phenomenal athlete, with rare explosiveness and the competitiveness to use that to his advantage, especially on the defensive end. A first team All-Pac12 Defensive Team honoree, Johnson is an energetic defender who gets out of position defending dribble penetration at times, but seldom gives up on a play. Though he's a bit smaller and is not as instinctive with his feet as Avery Bradley, Johnson's physical tools give him upside in a similar niche to the one the former Texas guard fills as a defensive-minded guard, should he dedicate himself similarly on that end of the floor.

On the offensive end, Johnson's efficiency dipped as a junior as he took on a bigger role for the Wildcats offensively. Sean Miller relied heavily on Johnson and his sometimes reckless tendencies for scoring due to Arizona's lack of experience and reliable offensive weapons. Using 26.3% of Arizona's possessions, Johnson shouldered that responsibility well relative to his peers as his 20.3 points per-40 pace adjusted and .99 points per-play rank just below average among shooting guards in our top-100. Scoring .637 points per possession in Arizona's losses and 1.055 points per possession in their wins, there's no understating how valuable Johnson was to his team.

Not truly elite in any one area offensively, Johnson is most effective in the open floor, where his speed and leaping ability make him a threat to finish emphatically on run outs. Capable of pushing the ball himself or getting up the floor to finish from the wings, the Pac-12 player of the year looks most comfortable in track meet type settings.

In the half court, Johnson does most of his damage in catch and shoot situations, which accounted for a quarter of his total shot attempts. Playing primarily off the ball both this season and last, he gets tremendous lift on his jump shot and his 38.4% three-point shooting on those attempts reflects his ability to spread the floor and hit spot-up shots from range with some consistency.

Only an average ball-handler, Johnson's ability to elevate allows him to get a shot up in a pinch off the bounce, but his 33.3% shooting on pull-up jumpers is reflective of his heavy usage, lack of prolific shot creating ability one-on-one, and less than steady shooting on the move. Johnson is most effective creating his shot in the two-man game where he can get a head of steam and attack dribbling downhill, or simply stop and pop in space if the defense doesn't respect his range. Looking out of control and forcing some difficult shots from the midrange and around the rim, Johnson may benefit from taking on a lesser role at the next level as he works to improve his shooting consistency and ability to create separation in the half court.

A capable passer who is adept at finding the roll man in the two man game, Johnson is a natural shooting guard, but he could provide some value as a secondary ball-handler in time if he can improve his handle and develop the ability to drive and dish more effectively.

Johnson's size and lack of point guard skills play against him, but his athleticism, coupled with his competitive nature and ability to make set shots could inspire some confidence that he can carve out a niche as a role-player, especially on teams that play up-tempo and are looking to add toughness and explosiveness to their backcourt.
Read full article

Nick Johnson entered college basketball ranked #23 in the Recruiting Services Consensus Index, ahead of lottery picks Michael Carter-Williams, Otto Porter, and Ben McLemore. Yet, he struggled to live up to the lofty high school expectations that followed him to Arizona, even though he was named to the Pac-12 All Freshman Team. He emerged as a key contributor as a sophomore, playing both on and off of the ball while proving himself as a top-notch perimeter defender. He struggled on the offensive end of the floor down the stretch though, particularly in the NCAA Tournament. Now a junior, Johnson is the veteran leader on a very young and talented team, but his NBA prospects are decidedly mixed.

Most problematic is his lack of a position. While some project him as a point guard, he will likely play off of the ball as a junior, and is well-undersized at 6'3 with a 6'6.5 wingspan and a 200-pound frame. While he is a very good athlete, with speed and agility to go along with explosiveness around the basket not to mention a rumored 38 no-step vertical leap he lacks the size, length, and strength to play the shooting guard position in the NBA.

Potential aside, another problem is that Duquesne-transfer T.J. McConnell's arrival likely means that Johnson's point guard days are behind him for the time being. That said, he shows some legitimate flashes of playmaking ability, particularly his capacity to find open shooters while slashing to the basket and his increasing comfort operating out of the pick-and-roll. That he ranks among the top-10 shooting guards in our database in assists-per-possession ratio is not a fluke. Yet, despite his willingness to share the ball and above average court vision, he makes too many mistakes like when his passes miss his teammates by feet or when he leaves his feet without a plan to suggest a smooth transition to the position at this, let alone the next, level.

Complicating this projection is the unfortunate reality that Johnson is not a particularly productive player. In fact, he ranks among the least productive shooting guard prospects in our database, averaging just 14.5 points per 40 minutes pace adjusted. He finds a majority of his offense in transition and as a jump shooter. His superior athleticism and solid handles, allows him to finish at a solid rate at this level, but his lack of size and strength will likely hinder him at the next.

It is worth noting here that Johnson finished less than 50% of his shots from inside of the arc. Part of this has to do with his inconsistency as a mid-range scorer. While his repertoire includes both pull-ups and step-back jumpers, as well as runners and floaters, he is at his most consistent (not to mention comfortable) as a shot creator while slashing to the basket.

He did improve considerably as a spot-up shooter last season, however, making an impressive 38.1% of his overall jump shots and shooting 39.1% from beyond the arc. His sports fluid mechanics with his feet set and he is able to get his shot off against taller defenders due to excellent lift and a high release point. As he moves to the shooting guard position, scouts will be watching to see if he can differentiate himself as a more prolific and versatile shooter, especially given how he will be expected to produce in a new role.

While he has a lot of work to do on the offensive end, he is an accomplished collegiate defender, usually finding himself guarding the opposition's best perimeter player. His greatest attribute is his intensity, which combined with his lateral quickness allows him to be a very good man and pick-and-roll defender. He also fares well gambling in passing lanes to the tune of 2.4 steals per game, though this tendency oftentimes finds him out of position, which hinders his ability to close out on perimeter shooters.

Yet, his prospects as an NBA player revolve almost completely around whether he can develop into a capable lead guard. His ceiling has never been particularly high, but he will have to evolve into a more productive player if he wants to prove his case to scouts. The good news for Johnson is that the tools are there, and his effort on the defensive end will guarantee him playing time despite Arizona's increasingly improving perimeter rotation. Athletic combo-guards are increasingly becoming fixtures in NBA rotations; therefore it is up to Nick Johnson to prove that he has what it takes to develop into a legitimate prospect on the foundation of a solid sophomore season.
Read full article

One of the most polished players seen at this event, Nick Johnson (#33 Scout, #40 Rivals, #23 ESPN) looked like the rare high school senior who could step into a college team's rotation immediately and not look out of place.

Undersized for a shooting guard at just 6-3, Johnson compensates with a strong frame and excellent athleticism, showing nice quickness and the ability to play above the rim in highlight reel fashion.

Offensively, Johnson is a fairly complete player, starting with his excellent shooting ability. He gets very nice elevation on his jump-shot, being capable of making shots both off the dribble and with his feet set. He's a very smart, savvy player who operates unselfishly on the court and is just as effective in transition as he is in the half-court, moving off the ball crisply and looking very willing to make the extra pass. Johnson still has room to improve on his shot-creating skills and ability to the pick and roll, but considering the work ethic he shows, that appears likely down the road.

Defensively, Johnson lacks great size or length, but makes up for any shortcomings he might have with the toughness he brings to the table. Often asked to guard players 3-4 inches taller than him seeing minutes at the small forward position for his high school team, Johnson held his ground admirably against the incredibly strong and athletic LeBryan Nash both inside the paint and on the perimeter, He showing a feistiness to his game that Arizona head coach Sean Miller will surely enjoy.

Johnson is virtually guaranteed to have an excellent career at the college level, but at 6-3, will have to continue to improve his playmaking ability and overall offensive polish to emerge as a NBA prospect.
Read full article