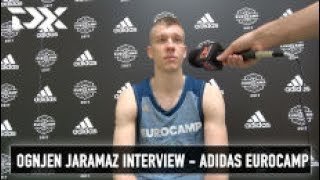 Matt Williams
@DraftExpress
Among the top performers from this past weekend's adidas Eurocamp, Ogjen Jaramaz is a member of the top-heavy 1995-born generation that is automatically eligible for the 2017 NBA Draft. A staple of Beobasket-run Serbian prospect-haven Mega Leks, Jaramaz is one of the lone holdovers who has played alongside all of the club's recent NBA Draftees; Nemanja Dangubic, Nikola Jokic, Vasilije Micic, Rade Zagorac, Timothe Luwawu, and Ivica Zubac.  Averaging 12.2 points and 3.5 assists per game this season, Jaramaz had a solid season with Mega before his strong showing at the Eurocamp.  Earning quite a bit of attention from NBA scouts in a down year for international prospects, Jaramaz may be the favorite to emerge from the secondary tier of automatically eligible prospects, which typically produces at least a few picks, to hear his name called late on draft night.

Standing 6'4.5 in shoes with a 6'5.5 wingspan, Jaramaz doesn't have great length relative to his height, but is oversized for the point guard spot nonetheless, and is still longer than the average player at his position.  Possessing a solid frame and terrific speed and explosiveness, the Krusevac native has a strong combination of physical tools for the next level, which stood out in particular against the roster of elite 2018 high school prospects talented assembled on The Path Team in Treviso.

Playing primarily on the ball, but also moving off of it alongside Kostja Mushidi this season in the Mega Leks backcourt, Jaramaz did his best work as a slasher and pushing the ball in transition, utilizing his athleticism with the ball in his hands.  Scoring only .844 points per possession over 14.8 possessions per game this season, Jaramaz wasn't efficient at all in an outsized offensive role, but has shown flashes of being able to put things together over the past few years, in games that were always well-attended by NBA scouts. He also had quite a few stinkers unfortunately, but his strong end to the year in Treviso could very well indicate his potential outside of the Adriatic League.

Jaramaz's value as a prospect is based largely in his ability to turn the corner and attack gaps to get to the rim in the half court.  A fearless penetrator with a strong first step and frame, Jaramaz has been producing highlight material in the open court in the Adriatic league for quite some time, but just shot 47% around the rim in the half court this season, due in large part to his questionable decision-making.  Lacking a natural feel for picking and choosing his spots and forcing the issue badly at times, the 21-year old guard has some interesting tools, but also plenty of things to work on as a scorer.

The most relevant skill Jaramaz will need to polish to reach his long-term potential is his jump shooting.  One of the reasons he struggled to make shots consistently at the rim last season was that he made just 28% of his perimeter attempts in the half court and defenders regularly sagged off of him, making it more difficult for him to get a clean lane to the rim.  Shooting the ball with a big body turn and inconsistent timing on his release, Jaramaz's jump shooting mechanics aren't broken, and he made 3-point shots and midrange jumpers at a nice rate in Treviso and to end the season in Serbia, but he'll need to become a more reliable threat from the perimeter to unlock the rest of his game.

As a playmaker, Jaramaz lacks a degree of polish.  He doesn't have great peripheral vision, nor is his handle particularly tight, leading to some wild moments in the pick and roll.  His ability to draw defenders off the dribble allows him tally some assists in drive and dump and drive and kick situations, but he would need to improve his basketball IQ, find a better balance between scoring and passing and develop into a more real threat from beyond the arc to maximize his efficiency and give himself a chance to carve out a niche at the NBA level.

As much of a mixed bag as Jaramaz is offensively, he already does some positive things applying his physical tools defensively.  Possessing good lateral quickness and showing the ability to pressure the ball away from the rim, Jaramaz brings a solid motor to the defensive end, doing his best to fight over screens and having the size to defend both guard spots with some success.  He takes some unnecessary risks trying to heat up the ball and can be a step late closing out, but was very effective getting in the passing lanes in Mega Leks's aggressive, pressing defense that picked up full court as often as almost any team in a major pro league in the world.

Though Jaramaz is not the most refined offensive player, his combination of size, quickness, toughness, and energy give him some upside if he can begin to figure things out as a playmaker and shooter.  His showing in Treviso served as a reminder of what he can do when his shot is falling, and in a very shallow class of auto eligible prospects, he likely earned himself some additional workouts which could ultimately lead to a spot in the second round of the 2017 NBA Draft.
Read full article

Jonathan Givony
@DraftExpress
Serbian guard Ognjen Jaramaz talks about his experience at the adidas EuroCamp, the season he just had in Mega Leks, his background in basketball, and the type of player he is and wants to become.

Mike Schmitz
@Mike_Schmitz
Despite missing day one of the 2017 adidas Eurocamp, Ognjen Jaramaz helped himself with a strong showing on days two and three. Automatically eligible for the 2017 NBA Draft as a 1995-born international prospect, the oversized Serbian point guard looked like the best player on the loaded All-Star team that blew out The Path Team today. Scoring 24 points on 10-14 shooting from the field to go along with 4 assists and 0 turnovers, the 21 year old Krusevac native made a strong final impression on the NBA decision-makers in attendance.

Attacking the rim aggressively against what amounts to a who's who of 2018 high school prospects (who are important to note, 3-4 years younger than him), Jaramaz scored at a strong rate inside and found a rhythm from the midrange. Getting into a groove as a scorer and a facilitator, the 6'4 Jaramaz gave The Path Team's smaller, younger guards some problems as his combination of size and terrific explosiveness really shined.

That being said, Jaramaz remains a bit limited as floor general getting tunnel vision to the rim looking for his own offense and not always picking and choosing his spots to get others involved. His jump shot is also an area of interest, as he shot only 28% from beyond the arc on 4.4 attempts per game over 53 games with Mega Leks this season, but he had a number of nice stretches shooting the ball from beyond the arc and from the midrange in competitive action and drills today.

Several NBA teams interviewed Jaramaz after his performance this evening, and with the lack of depth outside of the top-handful of players in this year's crop of automatically eligible European prospects, it isn't out of the question that he hears his name called in the later part of the second round on draft night depending on how many international players withdraw at the upcoming deadline. Possessing good explosiveness and size for his position, Jaramaz may not have the most advanced feel for the game, but his ability to utilize his physical tools on both ends make him seem perhaps better suited for the NBA game than many of his international peers.