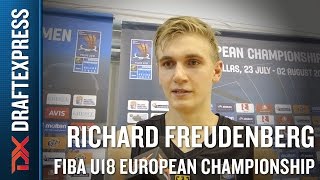 Matt Williams
@DraftExpress
This year's Eurocamp will feature only one player who competed in the NCAA last season, Germany wing Richard Freudenberg, who at age 18 will rank among the younger players in attendance.  Averaging 1.3 points and 1.3 rebounds over 9.3 minutes per game at St. John's as a true freshman, Freudenberg recently opted not to return for his sophomore season to start his professional career signing with Frankfurt Skyliners in the Germany First Division. He came into college as a highly touted international prospect, but struggled to get playing time on a St. John's team that battled inconsistency all season long and opted to use older and more physically mature players.  This marks one of the first times the Eurocamp has included an underclassman making the transition Freudenberg is right now, but he is a nice addition to the camp roster in a down year for international prospects in general with many of the top players still involved in club competitions or under contract with other sneaker companies. It will be interesting to see if Freudenberg can regain some of the momentum he lost this past season and show the intriguing package of size, shooting ability and fluidity that made him a coveted prospect at the FIBA categories with the various German national teams.
Read full article

Strengths:
-Has great size for a wing player at 6'9
-Frame is immature, but looks like it should fill out nicely in time. Very well proportioned
-Fluid athlete with some ability to get up around the rim
-Fundamentally sound player. Excellent shooting mechanics. Sets feet and gets shot off instantaneously. Shows potential coming off screens, as well as shooting off the dribble
-Can attack closeouts with nice footwork
-Shows the willingness to compete on defense. Gets over screens. Will surprise you with an occasional block rotating from the weakside.

Weaknesses:
-Has a beautiful stroke, but hasn't found consistency as a shooter yet. Results aren't always there. Sometimes misses badly
-Gets somewhat down on himself at times, especially when shot isn't falling
-Still working on his ball-handling skills. Loose, high handle.
-So tall that he has a difficult time staying in front of other players at his position defensively. Somewhat upright in his stance
-Frame is at an early stage of development and will take time to fill out

Outlook: Committed to St. John's. Will be a very young freshman next year. Very talented long-term prospect who will need to continue to fill out his frame and improve his skill-level to reach his full potential.
Read full article

-German small forward Richard Freudenberg is also on the college track, and he's already seen a handful of minutes in the first division with powerhouse Bayern Munich. Possessing great size for the wing, a strong feel for the game and excellent shooting mechanics, Freudenberg is a streaky shooter with all the tools to emerge as a high-level prospect down the road as he continues to add strength and improves his defense and all-around versatility. St. John's is rumored to be hot on his track.
Read full article

Strengths:
-Excellent size for a wing at 6-8, or possibly even 6-9
-Long arms. Big hands. Frame that should fill out nicely in time
-Smooth and fluid athlete
-Has very smooth shooting mechanics. Elevates off ground with a high release point
-Reliable shooter with feet set
-Intelligent player. Makes extra pass. Did not look out of place here despite only being 16 years old.
-Can put ball down fluidly in a straight line. Shows some athleticism off two feet. Can elevate for finishes from a standstill.

Weaknesses:
-A little bit one dimensional at this stage. Shot more 3s than 2s. Only got to free throw line four times in 174 minutes
-Doesn't have advanced ball-handling skills in the half-court
-Only 21/71 from beyond the arc (30%) in 25 FIBA and Euroleague ANGT games thus far. Has a pretty stroke, but isn't terribly consistent with it at this stage
-Has only dished out 8 assists compared with 51 turnovers in FIBA/ANGT play.
-Lacks some toughness defensively. Struggles to get in a low stance and contain smaller wing players. Doesn't always fight through screens
-Needs to become more physical as he matures and his body fills out

Outlook: Young, tall wing with nice potential as a high IQ floor-spacer. Still at a very early stage of his development. On the college track right now. Will likely pick from Gonzaga, St. John's and Vanderbilt according to what he told us.
Read full article

DraftExpress
@DraftExpress
An interview with 6-8 German wing Richard Freudenberg at the 2015 FIBA U18 European Championship in Volos, Greece.