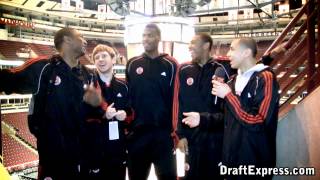 Jonathan Givony
@DraftExpress
Having recently announced his intention to transfer from N.C. State to UConn, Purvis will sit out all of next season after an inconsistent freshman year.

A key member of last summer's undefeated U18 FIBA Americas championship team, Purvis did not make it past the first round of cuts this time, seemingly looking like he's at a serious crossroad at his point of his career. Overdribbling for long stretches, taking bad shots, turning the ball over and struggling to make his presence felt defensively, Purvis could not exhibit his considerable talent in a consistent fashion as he continues to be plagued by bad habits and poor fundamentals. His inconsistent perimeter shot was a major hindrance to his chances of making the roster, as his flawed mechanics did not do him any favors in trying to establish himself a threat without the ball in his hands, while his poor decision making made it difficult for him to operate as a ball-dominant lead guard like he was accustomed to at the high school level.

Despite the seemingly harsh criticism, Purvis nevertheless demonstrated the significant talent-level that made him a top-10 recruit in high school and one of the most sought over players in the nation just a year ago. He's a superior athlete, is outstanding in transition, and possesses excellent scoring instincts to go along with his strong physical attributes. A year off under the tutelage of former NBA point guard Kevin Ollie may be exactly what the doctor ordered for this very talented combo guard, as he'll have to work extremely hard on his unconventional shooting mechanics and try to improve his knowledge of the game as much as possible to make up for lost time once he does step back on the court 18 months from now.
Read full article

Richard Walker
@DraftExpress
Our renowned Duke-UNC Smackdown expands this year into a full-fledged Triangle (UNC-Duke-N.C. State) Smackdown with another session at the McDonald's All-American game in Chicago.

Rodney Purvis (#15 Scout, #16 ESPN, #6 Rivals) didn't have a dominant week at the Boost Mobile Elite 24 event, but the former Louisville commit had a telling performance against the NBA guards he scrimmaged against and confirmed much of what we learned watching him on the AAU circuit.

The 6'4 Purvis, much like Justin Anderson, is one of the most physically mature players at his position in high school basketball. He has a well-developed frame, looking more like a collegiate upperclassman than one just starting his senior year of high school. On top of his physical strength, Purvis is an impressive athlete, displaying terrific straight-line speed and leaping ability two things he used over the course of the scrimmages and practices we watched to make a number of impressive plays at the rim.

At this point, it is Purvis's combination of size and athleticism, along with his aggressive mentality, that define his game. He's a very solid slasher who is difficult for high school guards to defend off the dribble with his combination of strength and quickness. He shows good ball-handling ability when he's breaking his man down one-on-one, and good body control when he gets to the rim, but forces some looks at the rim that he doesn't finish at times.

Capable of getting to the rim consistently, Purvis seems to go through stretches where he's too eager to settle for pull-up jump shots. He's a decent shooter at this point, but he needs to improve the consistency of his catch and shoot jumper, develop his decision-making, and learn to play at different speeds to become a more efficient offensive player.

Though Purvis is more of a ball-dominant scoring guard in the mold of Rodney Stuckey at the moment, he does show the ability to make plays for his teammates as well, particularly in drive and dish situations. It wouldn't be surprising to see Purvis spend significant time at the point guard position in the future, but he'll need to develop his court vision to maximize his talents as a passer.

On the defensive end, Purvis has the makings of a quality stopper. He handled the NBA guards he was asked to match up with during the late-night Boost Mobile Elite 24 scrimmage far better than many of his peers, showing how his physical maturity, lateral quickness, and aggressiveness can work to his advantage when he's dialed in.

One of the most highly regarded guards in this class, Purvis's decision to re-open his recruitment has him garnering attention from most of the top programs in the country. Though he has some things to work on, his physical attributes make him an intriguing long-term prospect.
Read full article