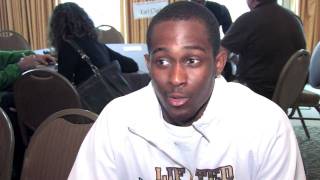 Jonathan Givony
@DraftExpress
Continuing with the intrigue that he showed yesterday, Rodrigue Beaubois played just 10 total minutes today (besides the drills), but persisted in showing off the many tools that keeps scouts around us very interested. He used his phenomenal wingspan to wrap up whoever he was guarding, particularly the very athletic Rudy Mbemba who got very passive once Beaubois arms were draped around him. He also showed nice instincts being in the right place at the right time to come up with an offensive rebound or loose ball, finishing with a floater at one point or making a very nice drive and dish play on another. His ball-handling could still stand to improve it seems, as could his perimeter shot which looks fairly streaky from the little weve seen. Beaubois was on the camp all-star game roster tonight, but did not dress for some odd reason.
Read full article

Luis Fernández
@DraftExpress
You feel something is missing in the draft process if there's not any unknown international guy coming out of nowhere. Rodrigue Beaubois fills the bill, even if we already saw him a couple of days ago in the Douai Tournament. As we pointed out yesterday, he looked very intriguing in the limited playing time he enjoyed.

Unlike Nicolas Batum, who remained with the French National team, Beaubois made a temporary detour to come to Treviso. He hasn't really performed at a great level in his first day in the camp, but by just putting on the table some of his superb characteristics, has drawn great attention from the NBA teams.

The potential is certainly there. He enjoys elite athleticism and an endless wingspan. He also shows excellent ball-handling skills with both either hands to dribble past his defender, a very solid stroke out to the three-point line, also in off-the-dribble mode, promising defense with very nice ability to come up with steals using his long arms, and he has already delivered some intriguing passes to think about solid court vision.

Beaubois is yet to prove to be a solid distributor and a good competitor. Actually he shows little emotion, sometimes even looking a bit passive. And of course, he's a completely unproven player if we talk about high-level competition in Europe. Indeed he barely has any experience in the National Team with his own peers.

Anyway, according to his agent Bill McCandless, up to six NBA teams have offered him a promise in the second round, nothing surprising giving how it usually works with "new guys" (remember Joel Freeland last year). Still, he will likely pull out and explore other options in future drafts, that's unless a first-round promise eventually arrives.
Read full article

Luis Fernández
@DraftExpress
Closing with the French representation, we saw a new guy on the team, Rodrigue Beaubois, who played as the third point guard. Born in 1988, he stands around 6-0 or 6-1, enjoys amazing wingspan, a very nice physical set and looks pretty athletic. He didn't stay on the court that much, but it was enough to show some poise playing the point, good ball-handling skills to attack his rivals, and solid decision making. He's in the EuroCamp in Treviso these days, so we will surely dig deeper here.
Read full article