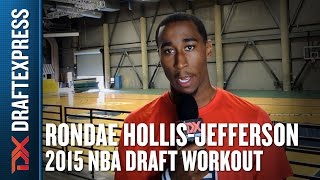 Hollis-Jefferson's measurable and observable traits are tailor-made for this season's Brooklyn Nets. His extreme comfort taking risks is exhibited time and again by his style of play - always teetering on the edge of control, while finding ways to make a positive impact. His ability to earn such leeway in the past most certainly comes from a genuine desire to connect with people. Hollis-Jefferson is both sympathetic to others as well as having the ultimate level of flexibility when it comes to trying new things. His ability to win friends and influence people creates internal champions for his success.

From a situation standpoint, all the factors appear to align for RHJ to carve out a major role for himself this year. Brooklyn is in the fledgling stages of a major transition period with a veritable open audition for players within its homogeneous mix of talent to stand out. It's often difficult for players to sustain a proactive approach in the face of adversity. But, Brooklyn has brought in a ton of players whose personalities and points in their careers lend themselves well to a play hard team dynamic - Trevor Booker, Greivis Vasquez and Jeremy Lin bring a measurable presence to the locker room. Justin Hamilton is a player who could surprise if/when Brook Lopez moves on to greener pastures.

Each of them comes into this year with varying levels of expectations in terms of on-court performance. For Hollis-Jefferson, having the status of a key developmental prospect, while being surrounded by people who are responsive to his style, is massively beneficial. Without the win-now pressure to maximize efficiency, Hollis-Jefferson should have the bandwidth necessary to push the boundaries of his game while garnering the support of his teammates. It may not always be pretty, but Jefferson's production should establish a new tier for his potential that wouldn't have been expedited in a more restrictive environment.
Read full article

The 14th ranked player by RSCI in 2013, Rondae Hollis-Jefferson had two productive seasons at Arizona, although they both ended in similar fashion with losses to Wisconsin in the Elite Eight. Being named to the -Pac-12 All-Conference First Team and All-Defensive Team, Hollis-Jefferson didn't dominate any single aspect of the box score but his presence was felt all over the court and he was a key piece of the Wildcat team in both seasons.

Hollis-Jefferson is a great athlete, measured at 6'7 with a long 7'0.5 wingspan with a strong frame as well. He will be able to match up athletically with many wing NBA players, as his combination of strength, quickness and explosiveness will be difficult to match. He complements his athleticism by playing with high energy, going full speed almost all game while bouncing all around the floor.

Hollis-Jefferson isn't a prolific offensive player at this point in his career and his 14.8 per 40 minutes pace adjusted ranked near the bottom of all players in our top-100. Most of his offense is derived from his athleticism and energy, as he runs the floor well in transition and is constantly cutting to open spaces in the halfcourt to get easy baskets. He finishes well around the rim, at a clip of 56.3% according to Synergy Sports Technology, as he uses his leaping ability to play above the rim. He absorbs contact well and can finish while drawing a foul, with his 7.1 free throw attempts per 40 minutes pace adjusted ranking as the most of any small forward in our top-100.

He doesn't create well off the dribble in the half-court as he looks tentative at times catching the ball in an attacking position from the perimeter. When he has a head of steam in transition, he is capable of getting to the rim through a quick, straight-line drive, but he isn't always able to do so against a compact half-court defense. He can make plays off the dribble based on his athleticism alone at times, but struggles when challenged defensively. He isn't great utilizing his off-hand, and he doesn't have great ball-handling skills to get past his defender in tight spaces.

More concerning is the fact that he isn't much of a jump shooter, as his inconsistent form prevents him from being reliable from any kind of range at this point in his career. He made just six of 29 three point attempts this season (20.7%), the lowest among small forwards in our top-100 rankings and just 36.3% of all jump shots according to Synergy Sports Technology. His shooting mechanics need serious work, possibly a major overhaul, to turn into any type of shooter opponents need to respect.

Hollis-Jefferson was one of the best defenders in college basketball, and will need to make his mark on this end of the court at the next level as well. While he guarded multiple positions in college, he was best matched up against wings, where he can match their quickness and bother them with his strength and wingspan. He is locked in on this end of the court, taking pride in shutting down the opponent's best scorer. He moves his feet well to stay in front of dribble penetration and can finish the play with a strong contest of the shot, blocking 1.1 shots per 40 minutes pace adjusted.

Surrounded by great rebounders, Hollis-Jefferson was able to contribute on the glass on both ends of the court averaging 9.0 total rebounds per 40 minutes pace adjusted, fifth among small forwards in our top-100 prospects. He crashes the glass hard, tracking down rebounds outside his area and exploding to meet the ball at its highest point to be first to the rebound.

At the NBA level, Hollis-Jefferson has the potential to be a great role player for a team with his lockdown defensive ability and the energy he will bring. His current offensive tools don't project him to be anything more than a role-player at best, but if he can improve his perimeter skill-set, he could turn into a more well-rounded player. Many NBA teams will be itching to have a player with his athleticism and motor and Hollis-Jefferson should be able to contribute on both sides of the court.
Read full article

Mike Schmitz
@Mike_Schmitz
A detailed video analysis by Mike Schmitz of the head to head matchup of D'Angelo Russell and Rondae Hollis-Jefferson from the NCAA Tournament game between their Ohio State and Arizona teams this past weekend.

Jonathan Givony
@DraftExpress
Unable to advance past the first round of roster cuts, Rondae Hollis-Jefferson had a difficult time finding a niche for himself on this USA Basketball squad, ultimately missing out on a spot to a similarly skilled prospect in Jerami Grant who had a definite advantage over him with a year of college underneath his belt and international experience with USA Basketball last summer.

Hollis-Jefferson did many of the things that allowed him make a name for himself at the high school level, namely providing terrific energy on both ends of the floor, hustling non-stop for loose balls and shutting down anyone he was asked to guard from position 1-4. His lateral quickness is nothing short of astounding, as he regularly went toe to toe with opposing point guards and put relentless pressure as they attempted to move the ball out of the backcourt and get their team into the offense.

Nevertheless, his offensive limitations were extremely glaring, as he not only could not provide any type of outside shooting presence with his distinct lack of range, but also struggled to convert shots around the basket in the half-court and in transition, often turning the ball over when he tried to create his own shot.

Hollis-Jefferson's glaring weaknesses, coupled with his inexperience in college and international play were likely too much for the US coaching staff to get past. He should have a pretty good sense by now that he simply has to improve his offensive skill-level if he's to establish himself as a legit prospect by the time he's finished at Arizona.
Read full article

Strengths:
-7-0 wingspan
-Has improved his frame. Carrying more weight in upper body
-Very good athlete. Springy with a quick second bounce
-Can make a mid-range jumper. Big, long and athletic enough to rise up over the top of a defender to get his shot off
-Handles ball effectively in transition
-Very good first step
-Can drive and dish
-Can face-up drive and finish off the glass in the half-court
-Makes some creative passes to teammates
-Plays with great energy. Outquicks and outworks guys
-Gets on floor for loose balls
-Great anticipation skills getting in passing lanes for steals

Weaknesses:
-No real consistent means of scoring in the half-court
-Wants to post up but not strong enough yet
-No right hand finishing around the basket
-Not a consistent shooter. Elevates too high and shoots ball on way down
-Advanced ball-handling skills still a work in progress

Outlook: Has improved his physique and seems to be working on his shooting mechanics. Still not an overly skilled player but finds ways to contribute with his athleticism and terrific intensity on defense. Must continue to hone his jumper to make the transition to playing on the wing full time in college and eventually the pros.
Read full article

Outlook:
Role-playing small forward who is somewhat of a poor man's Michael Kidd-Gilchrist. Does a little bit of everything. Very competitive. Must improve skill-level offensively significantly.