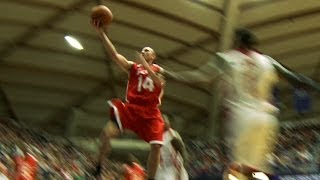 Matt Williams
@DraftExpress
Overview:A steady distributing point guard that is limited in certain respects, but can be an asset to some teams with his ability to make shots and create opportunities for his teammates. Has good size, but is not a tremendous athlete. Possesses middle-of-the-road size, quickness, and explosiveness for an NBA point guard. Lacks the strength to be a great finisher or defender. Can make an impact with his passing. Capable of doing some scoring, but that isnt really his forte. Will make an effort defensively, but his lack of athleticism hurts him more than it did on the college level. Won a state championship an Miami Senior HS (FL) before playing at the storied Oak Hill Academy (VA). Had a productive four year career at Maryland. Won an NCAA Championship with the Terapins in 2002. Bounced around the League after being picked in the second round. A complementary player that can be a nice asset for a team with the right players around him.

Offense: Offers most of his value as a passer and shooter, but brings some things to the table as a scorer as well. Gets about half of his touches in pick and roll situations with another quarter coming from spot up opportunities. Relies very heavily on his jump-shot for production and rarely gets to the basket or free throw line. Displays a smooth shooting stroke, but doesnt get great elevation or have a high release point. Takes quite a few threes each game, shooting a very respectable percentage. 3-point attempts make up between 40-50% of his total shots, but he is a good enough shooter to make that work. Attractive to some coaches because he can function as a catch and shoot guy without playing on the ball. Shot-selection is excellent. Not all that effective when pulling up off the dribble due to the fact that he cant create separation against many defenders. Will turn the corner on the pick and roll, but isnt quick enough to get to the rim without some help. Isnt going to finish at a high rate around the rim due to his lack of athleticism. Doesnt go to the foul line at all for that reason. Something of a streak shooter at the charity stripe. Wont score terribly efficiently, but will set up his teammates at a high rate. Shows very good court vision, always looking for an open teammate. Ideally suited for pick and roll situations since he struggles to get by defenders himself and proves to be a very crafty passer in traffic. Would rather drive and dish than drive and score. Limited as a starting point guard at the end of shot-clocks and game-situations for that reason. Needs to have a great shot-creator next to him. Capable of running the break effectively. A good facilitator across the board. Has cut down on his turnovers as hes gotten older, and is now regularly amongst the league leaders in assist to turnover ratio for that reason. Mistake-free player with a high basketball IQ. Not an ideal option due to his lack of athleticism and slashing potential, but more than capable of running a team and has the added versatility of being able to see minutes at the 2 as a spot-up shooter. In a good situation playing next a big combo guard in Brandon Roy.

Defense: A passable defender that will give an effort, but lacks the athleticism or strength to make a big impact. Applies solid ball pressure in half-court settings. Has the size to contest the shots of most point guards, but isnt strong enough to defend other positions or more powerful players. Doesnt a good job closing out shooters and getting a hand up, but lacks the quickness to stay with most of the elite point guards in the game. Wont shy away when forced to fight over a screen, but doesnt have the recovery speed to keep up with his man when he gets caught up. Shows good footwork and fundamentals when his man tries to get separation with hesitation and crossovers. Has a lot of good qualities on the defensive end, but often isnt explosive enough to stay with players who are overwhelmingly more physically gifted than him.
Read full article