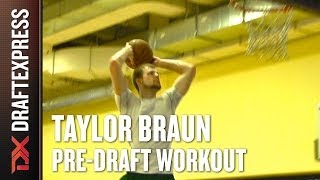 DraftExpress
@DraftExpress
Footage of Taylor Braun working out in preparation for the 2014 NBA Draft in Chicago, with an interview discussing what he's working on, what type of player and person he is on and off the court, how he got to North Dakota State and more.

Video film and production courtesy of Tad Hathaway of 312 Media

Mike Schmitz
@Mike_Schmitz
The MVP of the Summit League conference had a solid, albeit understated, showing at the Portsmouth Invitational Tournament, showing his intriguing all-around skill-level and talent but also not forcing the issue in a setting that sometimes requires that in order to stand out.

Braun has good physical attributes for his position, standing over 6-7 in shoes with a solid frame that should be able to fill out further. While not possessing especially long arms, Braun is a very good athlete, fluid and agile in the open floor, with a quick first step and the ability to play above the rim with ease.

A versatile player, Braun's outside shooting will likely be the key to his pro career. He has excellent shooting mechanics and made 48% of his catch and shoot jumpers on the season, which makes him a credible floor spacer. He's also capable of knocking down shots off the dribble, as he hit 41% of his pull-ups on the year, on nearly as high of a volume as he did with his feet set, which is fairly impressive.

Playing a heavy role for North Dakota State in terms of handling the ball and creating for himself and others, 55% of Braun's offense came in pick and roll, isolation and transition situations. He does a nice job of getting others involved (4.3 assists per-40), but isn't a great finisher around the basket, making just 48% of his attempts of this nature in the half-court. He doesn't do a great job of getting all the way to the rim and doesn't have much of a left hand, something opposing teams caught onto and exploited quite a bit. This was very glaring in particular in NDSU's two NCAA Tournament games against Oklahoma and San Diego State, where Braun finished just 5 of 19 from 2-point range.

Braun's biggest weakness from a NBA standpoint is his defense. His technique is poor, and he lacks focus at times here, biting on pump fakes, not getting a hand up on closeouts, getting lost off the ball, and frequently getting caught out of a stance in the half-court. Perimeter plays blow by him with alarming ease, and his lack of length (6-7 wingspan) hinders him further in this area. Braun's solid size and athleticism give him the potential to develop into at least a capable defender with better coaching, but he will have to improve substantially in this area if he's to hold his own in the NBA.

All in all, Braun has some interesting characteristics which should allow him to get an extended look from NBA teams. If he doesn't make it initially, he should be able to carve out a solid career for himself in Europe.
Read full article