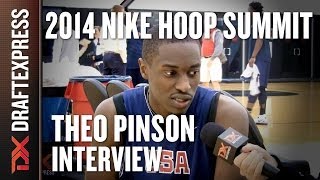 Jonathan Givony
@DraftExpress
It wouldn't be surprising if Roy Williams decided to sic his best defender, Theo Pinson, on Williams-Goss, and allow his smaller guards Berry and Britt to hide on the smaller and more one-dimensional Jordan Mathews or Silas Melson. Pinson was a force to be reckoned with against Oregon, absolutely smothering Dillon Brooks on the perimeter and forcing him into perhaps his worst game of the season (10 points on 2/11 shooting, 1 assist, 5 turnovers). Pinson's limitations as a scorer were never more evident against Oregon, but he's such an important part of their team with his ability to rebound, distribute and guard anywhere from 1-4. The fact that his jump-shot (and overall scoring touch in general) has barely improved in his three years at UNC is somewhat disconcerting, but there very well may be a spot in the NBA for a 6'6 swiss army knife with a 6'11 wingspan who can play some point guard in a pinch and is an incredibly disruptive defender.
Read full article

Widely regarded as one of the top high school recruits in the class of 2014, Pinson stayed relatively close to home committing to the University of North Carolina and coach Roy Williams at the end of his junior year in May of 2013. Pinson grew up in Greensboro, North Carolina, but played his high school basketball at Wesleyan Christian Academy in High Point, North Carolina. While at Wesleyan, Pinson was recognized with numerous honors including being named to the McDonald's All-American game, the Jordan Brand Classic, as well as participating in the Nike Hoop Summit after being named Mr. Basketball for North Carolina in 2014.

After two inconsistent seasons in Chapel Hill, Pinson is looking to put his stamp on the Tar Heels season as a junior. After a broken foot derailed his freshman season, Pinson returned as a sophomore with an increased role, playing 18 minutes per game mostly off the bench, but faced many of the same struggles that plagued him as a freshman. Unfortunately for Pinson, he suffered a setback last month in the form of yet another broken fifth metatarsal, this time in his right foot, which may derail most of his season.

Pinson certainly looks the part of an NBA wing, standing 6'6' with a solid 6'11 wingspan. He has a slight frame, but has gained significant weight since setting foot on campus, now being listed at a solid 211 pounds. Pinson has good quickness and has shown the ability to finish above the rim.

Pinson is a versatile offensive threat, which is both a blessing and a curse. He currently lacks elite ability of any one specific translatable skill- rather being a bit of a jack of all trades. As a sophomore Pinson continued to struggle as a reliable scoring threat, scoring a paltry 9.7 points per-40. Pinson struggles to create offense for himself, though he does finish around the rim at a high rate, where he shot 62.5% on all attempts per Synergy Sports Technology. He also does a terrific job on effort plays and 50-50 balls, evidenced by his solid 2.3 offensive rebounds per-40.

Arguably Pinson's greatest value is as a playmaker, where he ranked among the top wing players in the country in assists per-40 at 6.2. He has a natural feel for the game and is able to anticipate angles and open lanes to make difficult passes. With that said, he does have a tendency to get a bit out of control, particularly when trying to make plays off the bounce, evidenced by his 2.6 turnovers per-40. It will be interesting to see if Pinson placed an emphasis on tightening his handle in the offseason, in which case his playmaking responsibilities could certainly increase for the Tar Heels.

Pinson is dangerous in transition thanks to his playmaking and athletic tools, but in the half-court his game suffers because of his inability to consistently make shots from the perimeter, shooting only 29% on 1.6 three-point attempts per game as a sophomore. He has a significant amount of extra movement on his jumper, leaning far back and often landing far in front of where he elevated from, in addition to having a relatively inconsistent release point. While 1.6 isn't a high rate of attempts, his percentage from behind the arc combined with his poor free-throw shooting is certainly a cause for concern as he shot only 67.2% from the line as a sophomore.

While Pinson's lack of an elite offensive translatable skills may be worrisome, his versatility on the defensive end is very intriguing. His physical tools are terrific, and help him in being able to guard a variety of players. During the course of North Carolina's run to the national title game, Pinson was tasked with guarding players with very different skill sets such as Josh Hart of Villanova and Tyler Lydon of Syracuse.

Pinson's lateral quickness, coupled with his length, allows him to be a disruptive on ball defender, evidenced by his 1.3 steals per-40 as a sophomore. His engagement level off the ball is a concern however. Often times Pinson gets lost off the ball, watching action that he is not engaged in, allowing offensive players to back cut him or being late on close-outs. Playing with two traditional bigs, Pinson wasn't required to be much of a defensive rebounder, though he did so adequately with 4.6 defensive rebounds per-40. It will be interesting to see whether or not Pinson can remain an engaged off ball defender as a junior, which could lead to him carving out a solid role as a defensive stopper and secondary playmaker on the offensive end.

With Paige having graduated, there could have been an opportunity for Pinson to step into a larger playmaking role as a junior for North Carolina. Unfortunately his broken foot puts a damper on things, which scouts will have to monitor considering it's not his first injury of this nature. Once Pinson is cleared to return, it will be key for him to continue to improve his efficiency and shooting percentages from both the three-point and free-throw line, while also proving that he can remain engaged as an off-ball defender.
Read full article

A consensus top-15 recruit in the high school class of 2014, Theo Pinson's freshman season got off to a slow start before being derailed by a foot injury that kept him out of action from mid-January until early March. Averaging just 2.8 points, 3 rebounds, and 1.5 assists over 12.5 minutes per game, Pinson flashed his versatility in spurts, but didn't play a particularly significant role for the Tar Heels.

Standing 6'6 with a 6'10 wingspan, Pinson has a lanky frame that developed slowly early in his career. Tipping the scales at 188 pounds at the 2014 Hoop Summit a few months before his graduation from Wesleyan Christian Academy (NC), but currently listed at 205-pounds, Pinson seems to have added some amount of weight to his lean frame since arriving in Chapel Hill, but still would benefit from continuing to get stronger. Possessing outstanding speed and quickness as well as very good leaping ability as well, Pinson has prototypical physical tools for the wing position at the next level.

Skill-wise, there's a few things to like about Pinson, but perhaps no aspect of his game that truly stood out a year ago offensively, and a number of areas he'll need to make considerable strides in to reach his significant potential long-term. Pinson struggled to score consistently as a freshman last season, shooting only 37% from the field and failing to crack double-figures as he attempted no more than six shots in any game. Appearing to have improved a bit as a ball-handler, but still having room for additional growth, Pinson did his best work with the ball in his hands a year ago. A solid passer for a big guard with a nice feel for the game, Pinson averaged 4.6 assists per-40 minutes and only 2.1 turnovers, as he did a nice job finding the open man, especially on the interior.

The challenge for Pinson playing alongside a number of ball-handlers, but few shooters, was making his presence felt in the scoring column while operating off the ball. Lacking the mechanics to make shots consistently, but finding himself in heavy traffic when trying to make plays as a slasher, Pinson shot a mediocre 31% in the half court as a freshman. He was a bit more successful in transition, where he scored well running the wing and pushing the ball himself, but he appears early in his development as a scoring threat. It will be interesting to see what kind of role Pinson is asked to play this season as J.P. Tokoto's departure opens up some opportunities on the wing on UNC's stacked roster.

Defensively, Pinson was tremendous at times a year ago, as he played with a greater sense of urgency that he did at the high school level. His foot speed is outstanding, allowing him to harass ball-handlers in the half court, deny dribble penetration when he's dialed in, and make an impact in the passing lanes. Playing with impressive energy for stretches and pulling down 6.4 defensive rebounds per-40 minutes in the limited action he saw a year ago, Pinson has the making of a very solid all-around defender. His biggest weaknesses at this point are his occasional struggles fighting through screens in a timely manner, and periodic lapses in judgement giving up driving angles in the half court, or taking himself out of the play by being too aggressive or getting out of position.

Given how little he played a year ago, now isn't the time to draw any conclusions about Theo Pinson's short-term NBA outlook, even if it's fair to be cautiously optimistic. This season should prove to be a key one in the young wing's development, as he figures to play a fairly prominent role on what could be a very formidable UNC roster.
Read full article

Strengths:
-Good size for a shooting guard a 6-6 ½ with shoes
-Very long arms. 6-10 wingspan
-Versatile player who can do a little bit of everything
-Excellent feel for the game. Sees the floor and does a great job of getting teammates involved. Averaged 4.2 assists per-40 in 23 Nike EYBL games. Creative player with very good vision
-Good athlete. Can play above the rim with ease. Quick first step
-Gets to the free throw line at an excellent rate
-Very good lateral quickness. Gets in the passing lanes regularly thanks to length, quickness and anticipation skills

Weaknesses:
-Possesses a very frail frame. Only weighed 182 pounds this past July, up from 181 pounds the year before. Can he add more weight?
-Average ball-handler in the half-court. Struggles to get by opponents if forced to execute more complicated sequences than simply blowing past his man
-Not a great finisher around the basket. Lacks the strength to take hits around the rim and finish
-Possesses inconsistent shooting mechanics. Elbow flails out badly on catch and shoot attempts. Brings ball around the world, slows down his release
-Effort defensively is inconsistent

Outlook: Highly rated wing prospect going to North Carolina. Was very highly regarded early on in his high school career, but has fallen off somewhat as his body hasn't developed and his outside shot remains extremely inconsistent. Still a fairly talented and versatile player.
Read full article

Strengths:
-Measured 6-5 ½ in shoes, but has a very long 6-10 wingspan
-Very good feel for the game. Unselfish player who passes the ball well
-Very good scoring instincts. Shows nice body control. Uses glass well. Knows how to draw fouls
-Rebounds out of his area.
-Can defend a bit thanks to his length and smarts
-Can get up for offensive rebounds
-Can make tough shots. Has the makings of a very good shooter

Weaknesses:
-Has a very skinny frame that doesn't show huge potential. Just 181 pounds
-Not a great ball-handler, particularly in the half-court
-Needs to get stronger finishing around the rim.
-Struggled against the physical wings we saw him match up with