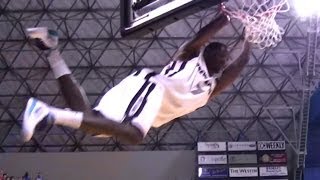 Matt Williams
@DraftExpress
Overview: A very athletic small forward who was developing into an impact player before getting hurt last season. Has good size for the small forward position and a 7-2 wingspan. Possesses great quickness and moves laterally as well as some point guards. Shows explosive leaping ability. Uses his athleticism to be effective. Gets out in transition and is a capable finisher. Doesnt have much of a jump shot. Can be effective as a slasher. Had shown signs of development offensively before getting injured with the Magic in 2006. Can bring a lot to the table as a defender and rebounder due to his athleticism. Still has quite a bit of upside considering his age relative to players of similar experience levels. Spent only one season at UCLA before entering the draft. Needs to improve his skill-level considerably to reach his potential, particularly with his outside shooting, as well as add bulk to his frame, but has the tools to be a very solid player.

Offense: Gets a fifth of his offense from each of fast breaks, spot ups, and cuts off the ball. Somewhat limited offensively in the half-court. A very poor shooter, particularly from beyond the arc. Mechanics arent terrible, but consistency isnt there at this point. Has a tendency to rush his shot at times. Wont do a lot of damage off the dribbleball-handling skills are average, but his first step is terrific. Gets most of his shots at the rim, where he is a very good finisher (among the best in the league actually). Uses his explosive leaping ability and outstanding extension to rise above the defense and dunk the ball in traffic. Shows solid touch at the rim when he cant dunk the ball. Gets to the free throw line at an excellent rate, but doesnt shoot a good percentage. Put up great numbers as a slasher in Orlando before getting injuries. Still trying to round back into form. Moves extremely well without the ball. Does a good job of getting up the floor in transition and reading his teammates in half court sets. Good offensive rebounder. Doesnt turn the ball over and shows solid passing ability. Has shown potential, but needs to find the right atmosphere for his offensive skills. Doesnt get many opportunities at this point. Still a fairly efficient guy, which helps.

Defense: A versatile defender that can defend both perimeter positions effectively. Has the lateral quickness, size, and athleticism to be a very good defender. Shows a good work ethic and a willingness to mix it up in the lane. Uses his length to make plays in passing lanes. Displays very good anticipation. One of the best in the NBA per-minute at coming up with steals. Doesnt block a lot of shots or commit many fouls, but does a good job contesting shots. Will box out and pursue rebounds at a terrific rate. Possesses all the physical tools necessary to be a great defender in extended minutes, but will have to improve in other areas to get more than rotation minutes.
Read full article