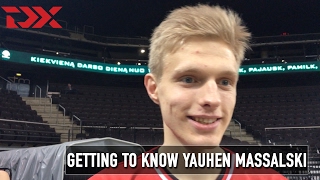 Strengths
-Leading all ANGTs (Kaunas, Coin and L'Hospitalet) in PER at 42.4.
-Although a bit undersized for a center prospect, he has an intriguing physical profile with a nice frame, long arms and excellent fluidity. Strong legs. Very coordinated. Can finish above the rim in space.
-Competes defensively. Able to step out and switch ball screens and protect the rim. Active hands. 3.2 steals and 3.2 blocks per 40 minutes. Still getting stronger but a versatile defender who should be able to check either big position.
-Competes on the glass. Fights for offensive rebounds. Uses his length and instincts on the defensive glass. 16.1 boards per 40 minutes.
-Nice feel for the game offensively. Doesn't play outside of himself. Good passer from the perimeter. Can DHO. Moves the ball. Plays within a system. Not going to stall out an offense.
-Best as a rim runner/roller offensively. Nimble diving to the rim. Decent hands. Tools help him finish at the rim. Flashes of touch with either hand.  72.7% from two.
-Low release on his jumper but he actually has some touch that could develop.
-Does a little of everything, plays a role and is a high intangible kid who competes and is very intelligent off the court. Big personality.

Weaknesses
-A shade undersized for a center prospect  more of a five skill wise than a four at this stage of his development.
-Not much of a threat to create from the perimeter. Doesn't look to straight line drive. Perimeter jumper has a ways to go before turning into a weapon  40% from the free throw line.
-Doesn't have a ton of game on the block. Looking to facilitate rather than score on the interior. Could use a reliable jump hook and counters off of that. More of a rim runner, diver, offensive rebounder at this stage.
-Good, not freaky athlete.
-A second late rotating from the weakside at times.
-A bit light to defend legitimate fives at around 215. Frame has room to add weight and he needs to fill out in both his upper and lower body.
-Projects more as a role-playing big

Outlook
The Belarusian big man followed up a strong U18 European Championships (B) with a stellar performance in Kaunas. His activity level, agility, impact on both ends of the floor and IQ/intangibles make him a worthwhile prospect who will likely do everything he can to maximize his potential. Massalski has some limitations but he does a lot of little things that coaches love and he should be able to develop his offense through trial and error due to the fact that he adds value on the defensive end and the backboards.