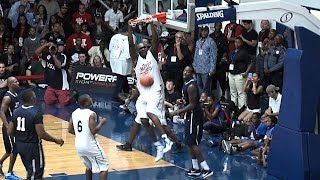 Matt Williams
@DraftExpress
Overview: A power forward with tremendous scoring instincts, but serious on-court and off-court issues that have never allowed his career to fully take off. Undersized, but has a terrific wingspan to compensate. Not a great athlete, and could be more effective if he worked on his conditioning. Has a strong lower body, and shows impressive body control in his midrange game. Displays all kinds of offensive moves in the post. Possesses incredibly soft touch both inside and out. Solid shooter from mid-range. A terrific rebounder on both ends of the floor. Not much of a presence defensively, largely due to a lack of effort. Had a solid but unspectacular one year career at Michigan State. Did enough to get himself into the first round. Took a few years to get a chance in Portland, but blew up as a third year player. Won the NBA Most Improved Player Award in 2004. Despite his tremendous talent, his career has been characterized by his poor conditioning, lackluster defense, selfish play on offense, and questionable off-court reputation. Will always put up great stats, but will have to change his mentality significantly if hes ever going to play on a winning team.

Offense: An extremely productive offensive player than doesnt put points on the board very efficiently. Gets roughly one third of his touches in the post with his other opportunities coming from a balanced mix of one-on-one chances, spot ups, offensive rebounds, and pick and rolls. Has a pretty complete offensive gameis clearly one of the most skilled power forwards in the league when hes fully dialed in. Has a smooth left handed jumper shot, but doesnt knock it down in spot up situations with great consistency. Can pull up off the dribble from the midrange, but doesnt score in that fashion at a consistent clip. Will even take some threes, but isnt serious threat from beyond the arc. Isnt a great option when hes forced to catch and shoot or make a quick decision off the dribble. Hits shots at an exponentially higher rate when he can catch on the block, face up, and measure up his defender. Doesnt always fight for position due to the fact that he likes to take face up shots from fifteen feet. Has a nice array of post moves over his left shoulder. Can spin off for a turnaround jumper, or use his bulk to drop step into position for an easy lay in. Shows soft touch on his baby hook, and terrific footwork. Not nearly as effective or polished when forced to operate with his right hand over his left shoulder. Lacks the athleticism to be a flashy finisher at the rim, but his tremendous touch allows him to be relatively consistent. Plays tough at the rim, going to the line with solid frequency and hitting his free throws at a solid clip. Surprisingly talented offensive rebounder considering his lack of leaping ability, a testament to his fantastic hands and terrific timing. Puts the ball on the floor pretty well for a player of his stature, but turns it over at a high rate. Not an awful passer when he decides to give up the ball, which unfortunately isnt often enough. Proves to be very good when he can play to his strengths and mediocre when hes forced to step out to the perimeter and do things that hes not able to do consistently.

Defense: Lacks the size or athleticism to be effective consistently, and doesnt do himself any favors with his poor fundamentals and effort. Does a decent job fighting for position on the block, but doesnt show a willingness to step away from the basket when his man floats out to the perimeter. Doesnt fight for position on the block. Does a good job getting a hand up when his man makes a move, but lacks the height and leaping ability to be a factor against players that can get good separation on the block. Lacks the lateral quickness to close out shots. Very slow to recover to the ball when it is swung around the perimeter. Wont hedge a screen any time soon. Rebounds the ball at an excellent rate due to the fact that he has good hands and consistently has position underneath. Does an adequate job defensively in the post, but is a complete non-factor when forced to step away from the rim.
Read full article