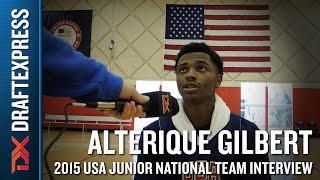 Strengths
-Strong build (181 pounds) despite not possessing great size
-Very good athlete who can play above the rim at times despite his size
-Polished ball handler. Able to find a nice blend between scoring and playmaking.
-Good vision and creativity out of pick and roll. Able to hit the weak side shooter, hesitate and find the roll man in stride, or get into the teeth of the defense and drop it off to a big at the rim. Delivers passes from different angles.
-Streaky but is a shot maker with considerable range (2.2 made 3s per-40). Best pulling up off the bounce. Loves the quick jumper in transition. Gets great elevation.
-Uses his quickness, handle, and ability to play at different speeds to get in the lane. Nice touch on his floater. Doesn't shy away from contact in the lane. Gets to the free throw line at a tremendous rate (career 7.5 per-40 in 44 DX database games)
-Can be a very pesky defender when he wants to be thanks to his strength and quickness. Plays with toughness. 2.3 steals per-40.

Weaknesses
-Really lacks great size or length at 5'10 1/2 in shoes, with a 6' 0.5 wingspan
-Very capable playmaker but doesn't always want to make the simple play.
-Size limits his vision at times. Has a tendency to kill his dribble too quickly versus pressure. Picks it up and waits a split second for something to develop.
-Good not great shooter. Holds onto the ball for too long at times. Career 33% 3-point shooter
-Made a conscious effort to get others involved but isn't afraid to start getting jumpers up if he sees one go down.
-Explosiveness and build help him around the rim but he still struggles versus length given his size. 46.5% career 2-point shooter already in high school

Outlook The UConn commit didn't quite fill it up like he did the last time we saw him at Nike Global Challenge (27.5 points per 40 pace), but he proved his merit as a distributor while still putting enough pressure on the defense as a scorer. Although undersized, Gilbert is a tough competitor who provides a nice balance between scoring and playmaking while harassing opposing point guards on the defensive end. Gilbert's upside is a bit limited at 5' 11 but he'll most certainly turn in a productive career as a Husky, especially playing next to 2015 guard Jalen Adams. He was lauded by USA Basketball staff members for his work ethic and insistence on getting in early every morning to get extra work in.
Read full article

The undersized, scoring point guard and UConn commit Alterique Gilbert put together a very impressive four-game tournament, eventually ending in a championship victory over USA East. Over the course of the entire Nike Global Challenge Gilbert averaged 27.5 points, 5.6 rebounds and 6.3 assists per 40 minutes pace adjusted while posting a 23.2 PER and shooting 59.1% from two and 30.8% from three.

Sporting a strong frame, outstanding quickness and explosive leaping ability for a player his size, Gilbert got into the paint at will while knocking down a handful of tough threes off the bounce. Playing with more of a scorer's mindset at this stage, Gilbert had no problem creating his own shot in the half court by using a bevy of hesitations and combo moves that were tough for defenders to contain when combined with his athletic ability.

Gilbert also did a tremendous job finishing inside the paint despite his less than stellar stature. The Georgia-native showed no fear challenging rim protectors, and even went coast to coast, elevated off one foot and almost hammered one home on a near seven-footer before getting fouled in the championship game.

Gilbert also did a nice job creating space to get to his jumper, utilizing quick crossovers and step backs in isolation or pick and roll situations. Gilbert is more of a shot-maker than a pure shooter at this stage, as he takes a lot of contested jumpers and struggles with his balance at times.

As a point guard and decision maker, Gilbert still has some room to improve. He's a more than capable passer, and he showed that with a handful of pick and roll dimes and transition drop offs, but Gilbert is more often than not driving to score, resulting in low percentage shots in the paint or missed teammates from time to time.

Defensively, Gilbert has the strength and quickness to be a very pesky defender. He's not always overly focused on that end of the floor, however, and will struggle containing, contesting and bothering shots or passes from bigger point guards.

Overall, Gilbert has some room to develop his decision making and pure point guard skills, but he's an elite athlete for his position, can make tough shots on the dribble and could very play a Pierre Jackson type of role at the college level in time.
Read full article