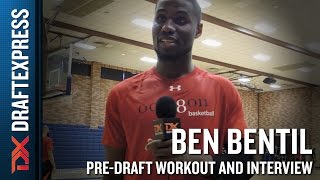 Ben Bentil was one of college basketball's most improved scorers in 2015-2016, seeing his points per 40 minutes more than double from 11.8 as a freshman to 24.6 in his sophomore season. This strong season put him on NBA radars and after a solid performance at the NBA Draft Combine, he chose to leave his name in the draft and start his professional career.

Measured at 6'8 with a strong 229 pound frame, Bentil has solid size for his position and has some physical tools to help him compete against NBA players. None of his athletic attributes are elite, but he has a balanced profile with a long 7'1 wingspan, excellent upper body strength and above average on court mobility to help him move fluidly around the court. He certainly won't overwhelm other power forwards with his athleticism, but his overall profile is very solid for his position.

He uses his mobility well on the offensive end and has many of the offensive skills NBA teams are coveting in their power forwards as he is comfortable scoring from fifteen feet and beyond. He is a confident jump shooter with a very nice stroke, although he does need to iron out some inconsistencies in his release that can cause his shot to be off-line.

From there, he has demonstrated some potential to attack off the dribble if defenses look to take away his jumper with a jab step, and straight line drive to the rim if he gets his defender off balance. He uses his strength to get to his spots off the dribble and has nice touch with a hook shot once he gets into the paint.

Working with his jump shot and ability to put the ball on the ground, a team can use him as the screener in ball screen actions where he has the potential to be a versatile weapon. He can either pop out to attack from the perimeter or roll to the rim where he converts 57.9% of his attempts according to Synergy Sports Technology. He does need to become a craftier rim finisher against NBA defenders by using ball fakes, his body or the rim as he doesn't possess the explosiveness to be an automatic finisher at the rim. He is able to get above the rim off two feet in the open court but doesn't get the high off the ground off one foot and will have to learn how to convert his shots in the paint despite this against NBA rim protectors without getting blocked.

Bentil wasn't a high efficiency offensive player and although his 57.5% true shooting percentage was an improvement over his freshman year mark it remained a below average mark relative to other power forwards in our top 100. There are legitimate concerns about his willingness to create for others, as well as his recognition of defenses and overall awareness, which has hurt his efficiency levels. This was manifested in his poor shot selection with Bentil forcing up long two pointers almost exclusively upon catching the ball at times, which dragged down his efficiency.

He isn't a willing passer at this stage in his career with just an 8.0% assist rate, always looking for his own offense instead of seeing the floor to helping his teammates score as well as himself. His coaching staff will want him to become a more team friendly player as he will likely be a secondary offensive weapon at the next level.

Bentil has shown that he can score points in bunches with his jumper, face up game and the confidence needed to be a scorer. This is a good starting point for him to find an offensive role at the next level.

Defensively, Bentil didn't make much of an impact for Providence and will have to make major strides in several categories to contribute on that end. With his size and mobility, teams will probably want him to defend perimeter based forwards. Bentil failed to show a desire to guard action around the three point line, standing straight up with his hands at his side while letting his opponent move freely. He wasn't very competitive defensively and let guys score over him way too easily. He'll have to unlock some passion to play with more fire and have more pride in his individual assignments.

Just as concerning is his failure to rebound consistently. As the big men on the floor, his team needed him to crash the glass and finish possessions. He was more likely to stand and watch the shot come off the rim rather than box out and meet the ball at its highest point as he averaged only 5.7 defensive rebounds per 40 minutes pace adjusted. Although he lacks a high level of explosiveness, he has the strength to hold opponents off the glass and the quickness to rebound outside his area if he puts his mind to it. He has to find his defensive niche and while rebounding might be it he will have to expend a higher level of energy in that area for that to happen.

Providence wasn't a deep team, as they rarely played more than seven guys in any given game with Bentil averaging over 34 minutes per game. This could explain some of his defensive lapses as his team needed him to stay on the floor, so if Bentil can improve his intensity and fundamentals, he'll have a much better chance of turning into a useful defender. He will need to accept his role and tighten up his focus on the perimeter while also crashing the glass to help rebound. If he can do that, teams can certainly fit him into a team concept as a useful defender.

Bentil's emergence as a prolific scorer who can put the ball in the basket from anywhere on the floor with tremendous confidence and aggressiveness will make him a player every team looking for a stretch 4-man will want to evaluate. Players in his mold are difficult to find in today's NBA, and are increasingly valuable, which may help some teams want to overlook some of his shortcomings, which are mainly correctable flaws. His perimeter skills makes him a viable draft pick, but to stick in the NBA long term, he will need to become more well-rounded on both sides of the ball while exhibiting refined decision making to develop into a rotation player.
Read full article

Ben Bentil was as hot as you can get to start off the game, hitting his first four field goals just six minutes in, three of which came from beyond the arc. He slowed down quite a bit after that, but still ended up having a strong outing, rebounding better than expected, and playing solid defense.

Bentil's shooting is a great place to start, as its one of the most important aspects of his NBA profile. He has gorgeous mechanics and excellent touch, with range well out to the NBA line and even some ability to create some separation off the dribble in the mid-range when closely contested or off a jab-step.

Some of Bentil's warts were also on display, as he repeatedly showed average awareness when defenders started closing out more aggressively to eliminate his 3-point shot, not really seeing the floor to the level you'd need to playmake out of those situations. Instead, he would dribble with his head down into traffic, which has been somewhat of an issue throughout his career as he does not possess the highest basketball IQ around.

Benti's shooting range and overall scoring ability from the power forward position automatically makes him a candidate to be drafted, especially considering his solid measurements, standing a hair over 6'7 barefoot with a 7'1 1/2 wingspan. He'll need to round out the rest of his game to stick long term, but NBA teams are absolutely in the market for players in his mold these days. Bentil is only testing the waters at this point, but another strong performance tomorrow and beyond as we get closer to May 25th could convince him to keep his name in the draft.
Read full article