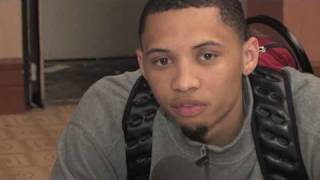 A junior college transfer from the College of Eastern Utah, Darington Hobson took a long road to enrolling at New Mexico (see Jeff Goodmans terrific recap of his journey), where he has already established himself as one of the top players in the Mountain West Conference.

A 6-7 combo forward with long arms and average athleticism by NBA standards, Hobsons main appeal as a prospect lies in the versatility he displays coupled with his ability to create his own shot.

Left-handed, Hobson is a very good ball-handler for his size, looking very comfortable attacking opponents off the dribble from the perimeter in one on one situations. He has excellent footwork and timing on his drives, and is a pretty fluid all-around player, displaying a high skill level and advanced scoring instincts. Although his first step is not very quick, Hobson has a knack for getting his man off-balance through shot-fakes and hesitation moves, and does a great job initiating (and exaggerating) contact to get to the free throw line.

Once putting the ball down, Hobson has very good court vision to find the open man, as evidenced by the 5+ assists per-40 he currently averages. He shoulders a heavy load for New Mexico offensively, but is an unselfish player who does a good job of getting others involved, sporting an advanced basketball IQ.

While Hobson does a good job creating scoring opportunities for himself and others, he isnt quite as effective at finishing plays. His shooting percentages from inside the arc leave a lot to be desired at just 43%, a reflection of his struggles finishing around the rim (due to his lack of explosiveness) in traffic, coupled with his often-poor shot-selection.

Hobson loves to pull up off the dribble in the mid-range area, but is not particularly effective when doing so. He makes a number of head-scratching decisions over the course of pretty much every contest he plays in, as evidenced by his high turnover rate. Its a different story in catch and shoot situations, though, as Hobson is fairly effective with his feet set, knocking down 38% of his 3-point attempts this season, albeit on a relatively small number of attempts. The paltry percentage he converts from the free throw line (62%), though, is likely an indication that he still has work to do on his jump-shot.

Defensively, Hobson puts a solid effort in and appears to be fairly smart, but is unfortunately limited by his average physical tools. Spending heavy minutes at the power forward position, Hobson has problems guarding the perimeter, as he does not possess great lateral quickness. On the plus side, Hobson does a very good job crashing the defensive glass, coming up with a solid 7.4 defensive boards per-40 minutes pace adjusted.

While Hobson was receiving mentions of being a potential lottery pick by some NBA draft outlets earlier in the season, hes unlikely to be considered a great NBA prospect when its all said and done. His average physical profile, coupled with the fact that hes already a 22-year old junior with some potential off-court red flags who needs to have the ball in his hands extensively to be effective is not a great combination. Hes clearly a terrific college player, though, and may still be figuring things out only 20 games into his NCAA career. Hobson will likely garner looks in the second round whenever he decides to declare, but ultimately may find more success in Europe where he could be extremely effective mismatch threat as a face-up combo forward, ala Kasib Powell.
Read full article