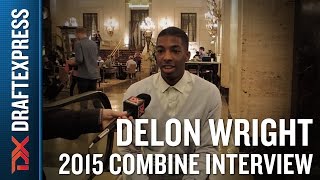 A junior college transfer who came in with little in the way of expectations or fanfare, Delon Wright leaves Utah as a second team All-American, fresh off an NCAA Tournament Sweet Sixteen appearance. Dorell's brother had a tremendous two years at Utah, playing a major part in resurrecting the program under former NBA head coach Larry Krystkowiak.

Wright has excellent size for a point guard at 6-5, albeit with just an average 6-6 ½ wingspan and 179 pound frame. He uses his height to his advantage tremendously as a passer, where he surveys the floor over the top of the defenses, and can make pinpoint passes to cutters and spot-up shooters, primarily in pick and roll and drive and dish situations.

From an athleticism standpoint, Wright is unique, as he is not particularly quick or explosive by traditional standards, but rather relies on a very herky-jerky style that helps keep defenders off balance. Wright plays at a variety of different speeds, changing directions frequently with slithery ball-handling moves and crafty footwork. His distinct pace and shifty style of play makes him difficult to guard, as he utilizes a variety of different Eurostep moves, ball-fakes and other deceptive techniques from his huge bag of trickshelping him draw fouls at a very nice rate.

Wright's best attribute from a NBA standpoint is likely his defense. He has quick feet, excellent instincts and a scrappy nature, putting outstanding pressure on the ball. His instincts for getting in the passing lanes and overall timing for making plays off the ball is extraordinary, helping him average an outstanding 2.6 steals per-40 minutes pace adjusted in his two seasons at Utah, with a ton of blocks and rebounds thrown in for good measure.

Wright's anticipation skills are off the charts, and he does it without gambling in the passing lanes excessively, but rather by simply sniffing out when to help out teammates, and when to make a reflexive play as a sort of free safety. He's big enough to guard either backcourt spot, which gives his team coveted positional flexibility that is very much in demand in today's NBA. ‎

The biggest concern about Wright's transition to the NBA revolves around his outside shooting. He made just 38 of 126 attempts the past two seasons (30%), and is especially limited as an off the dribble shooter. Wright's pull-up jumper is virtually non-existent at this stage, as he sports a low and slow release on his shot, and gets little to no elevation, which makes it difficult for him to create separation from defenders. His hesitance to shoot off the dribble is something that better defenses scouted and were able to take advantage of consistently the last two years, sagging way off him, going underneath screens on the pick and roll, and generally mucking up Utah's offense.

Wright tends to pick up his dribble quite a bit in the mid-range area for this reason, often throwing up an awkward shot at the rim or being forced to reset the offense, which is much easier to do with a 35 second shot-clock.

This wouldn't be as much of an issue if Wright projected as a better finisher around the basket. He's not particularly strong, long or explosive, which makes it difficult for him to finish plays at times through contact, especially against better defenses. Getting to the free throw line at a strong clip helped his efficiency tremendously in college, but there are question marks about whether he can he continue to do so at the NBA level. Otherwise, will he be able score in the half-court in the NBA without a consistent jump-shot?

How much upside Wright still has to continue to improve is also something that remains to be seen. His frame is on the frail side, and may be close to physical maturation, and he could be the oldest player to hear his name called on draft night, as he's turning 23 at the end of April.
Read full article

Mike Schmitz
@Mike_Schmitz
(Video may not load with Internet Explorer. Use Chrome or Firefox)

One of the best teams not to make last year's NCAA Tournament, after brutally losing 8 games by a margin of four points or less, the Utah Utes are widely pegged to make their first Tournament berth in six years after returning virtually their entire roster.

A major factor in that will be the play of their point guard Delon Wright, one of the biggest surprises in college basketball last season, who emerged from Junior College obscurity (via prep school in Philadelphia) to establish himself as arguably the most versatile player in the NCAA.

Wright is one of the most efficient scorers in college basketball, shooting a scintillating 63% from 2-point range, while getting to the free throw line over 6 times per game and knocking down nearly 80% of his attempts once there.

Wright does a good amount of his scoring in the open court, averaging over 4.5 transition opportunities per game according to Synergy Sports Technology. Not only does he ignite the fast break at a prolific rate, he also converts his opportunities here with spectacular efficiency, posting a phenomenal 1.436 points per possession in these situations (#1 in college basketball [min: 100 possessions]), hitting nearly 80% of his field goal attempts from the floor.

Wright is also Utah's primary ball-handler in the half-court, seeing nearly five attempts per game in pick and roll situations. He uses his superior strength to draw fouls very frequently, being fouled on nearly a quarter of his possessions in these situations, which helps mitigate his relatively high turnover rate (20%) on the pick and roll.

While not exceptionally quick or explosive, Wright does a terrific job of getting to the rim and finishing, hitting an outstanding 66% of his shots around the basket in the half-court. He is extremely crafty with the way he creates offense on the perimeter, relying heavily on a variety of hesitation moves, fakes and fancy footwork to keep opponents off-balance. His combination of excellent size, long strides and smooth body control helps him get right into the teeth of the defense with regularity, and he finishes very creatively around the rim with soft touch and a knack for using the glass. Wright's slinky, herky-jerky style of play draws him plenty of fouls and helps him collect a good amount of points from the free throw line (converts 79%) every game.

Since Wright barely has any semblance of a mid-range gamehe converted just a handful of off the dribble jumpers all seasonhe's forced to make his living inside the paint, something he excels at, and helps keep his shooting percentages and overall scoring efficiency extremely high. Utah plays at a relatively slow pace, which often revolves around Wright dribbling the ball for long stretches of the 35 second shot clock, looking for avenues to exploit.

Not the most traditional point guard in terms of pure distribution skills, most of Wright's assists seem to come off simple drive and dish plays or extra passes on the perimeter within the flow of the offense. It will be interesting to see if his court vision and all-around creativity improves in his second (and final) season of division one basketball, as at times last season he tended to pound the ball somewhat excessively, picking up his dribble or forcing the issue trying to barrel his way down the lane.

Part of the reason for that revolves around Wright's struggles as an outside shooter. He converted just 12 of his 54 attempts (22%) from beyond the arc last season, as he sports extremely inconsistent and unconventional shooting mechanics that don't leave a lot of room for optimism regarding his ability to ever become a legitimate threat from the perimeter. Opposing defenses really started to exploit this as the season moved on, and Wright's overall field goal percentage fell from a ridiculous 71% in November and December to a much more ordinary 49% in January, February and March.

In different eras of the NBA that might not be as much of an issue considering how many other ways Wright impacts the game, but these days there just aren't that many point guards who can be considered total non-shooters. Unless he significantly improves his outside shot, he might have to reinvent himself as somewhat of an all-around defensive oriented guard ala Shaun Livingston or Garrett Temple to carve out a real niche.

What separates Wright from other non-shooting guards and makes him extremely unique is his ability to fill up the entire stat-sheet, as he's one of just 13 players in the DraftExpress database (spanning the last 30 years of college basketball) to average over 6 rebounds, 5 assists, 2 steals and 1 block per-40 minutes:

Wright doesn't have incredible length (he measured just a 6-6 ½ wingspan at the Nike Skills Academy this summer), an amazing frame or exceptional athleticism, but he does have a superb knack for being in the right place at the right time, which is a testament to his tremendous feel for the game. He has excellent size for his position and excellent lateral quickness, which allows him to put terrific pressure on the ball, draw charges on a regular basis, and defend either backcourt position equally well.

You won't find many prospects with a more extreme contrast between their strengths and weaknesses than Delon Wright, which is sure to make him one of the more controversial figures in this upcoming draft class. Many analytics models rate him as a sure-fire lottery pick, while traditional scouts seem to be split at the moment on whether or not he'll be able to carve out a role at the NBA level due to his lack of perimeter shooting and unconventional style of play. Making things even more complicated is the fact that Wright is a year old for his class, turning 23 in April. Nevertheless, this upcoming season should be very telling for Dorell's brother, as another strong year capped by a solid NCAA Tournament run would surely win over some of those decision makers that are still on the fence.
Read full article