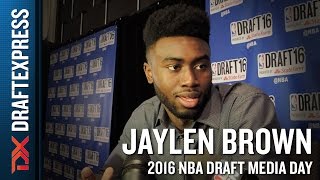 Long considered a blue chip prospect, but steadily climbing the recruiting rankings over the course of his high school career at national power Wheeler HS in Alpharetta, Georgia, Jaylen Brown cemented his standing as a consensus top-five player in the high school class of 2015 as a senior before surprising some with a late spring commitment to Cuonzo Martin's Cal Golden Bears over the likes of Kentucky and Kansas. Averaging 14.6 points, 5.4 rebounds, and 2 assists per game as a true freshman, Brown was named Pac-12 Freshman of the Year and earned a spot on the All-Pac-12 First Team, solidifying himself as a top-10 pick despite plenty of ups and downs.

Measured at 6'6.5 in shoes with a 7'0.5 wingspan and a 222-pound frame at the 2015 Nike Hoop Summit, the intrigue surrounding Brown starts with his prototypical tools for the small forward position. An explosive leaper in space with the strength to potentially spend some time at the power forward position at the next level depending on the matchup, Brown has long looked the part of a NBA wing.

The challenge for Brown as a freshman was parlaying those tools into consistent on-court production. Asked to fill a substantial role in Cal's space-starved offense, Brown did most of his damage playing off the ball spotting up or filling lanes in transition, but was also granted significant opportunities to create for himself off the bounce in the half court. Given considerable freedom, the freshman scored just .853 points per possession over 17.2 possessions per game to rank 149th in scoring efficiency among the 173 players using over 17 opportunities per game according to Synergy Sports Technology.


The sizeable role Brown played in Cal's oversized but underskilled lineups shined a spotlight on the good and bad elements of his offensive game, particularly in the half court. Coming out of the high school ranks with the reputation as a productive scorer, Brown shot 52% inside the arc, 39% from deep, and 70% from the line in the 50 games of stats we have for him in our database spanning his three seasons on the summer circuit at the prep level. Flashing the ability to make jump shots with range, but doing most of his damage as a slasher, the Georgia native with nothing short of spectacular at times on the AAU circuit.

Shooting 48% inside the arc, 29% from three, and 65% from the line for the Golden Bears, Brown didn't have the easiest time translating his game to the college ranks. With 51% of his shot attempts in the half court coming from the perimeter, the mechanical issues with Brown's jump shot became clear. Timing his release differently shot-to-shot whether he's pulling up off the bounce under pressure or shooting catch and shoot jumpers in space, Brown's mechanics are not particularly reliable at this stage. He casually fades away on some attempts unnecessarily, sometimes holding the ball longer than others at the top of his shot. His combination of mechanical issues resulted in the unimpressive 31% he shot from the perimeter overall.


As a slasher, Brown battled through bouts of inefficiency as well. Possessing a strong first step and impressive leaping ability off of one and two feet, Brown's fairly loose handle, lack of craftiness around the basket, and tendency to get tunnel vision and force shots into traffic led to his 45% shooting around the rim in the half court and top-100 leading per-40 minute pace adjusted turnover rate. While Cal's insistence on surrounding him with two to four non-shooters at all times didn't do him any favors, there's no doubt that his feel for the game is underdeveloped at this stage in his career, as evidenced by his poor -6.48 PPR, which is by far the worst passing metric among any non-big man in this draft.

As much as Brown struggled, he had plenty of positive moments offensively as well. He scored the ball well inside throughout the middle portion of the season and found some amount of consistency with his jump shot in the later part of Cal's Pac-12 regular season schedule. He's capable of scoring effectively around the rim, his jump shot isn't broken, and he gets to the line very prolifically, even if he is aggressive to a fault at times. He proved to be a willing passer, dishing out a respectable 2.9 assists per-40 minutes pace adjusted, and scored impressively on the break, showing the ability to fill lanes or push the ball himself. Surrounded by better talent in a more up-tempo offense, Brown will likely have an easier time utilizing his superior physical tools and nose for getting to the basket in the open floor and half-court.

Looking far more comfortable on the offensive end some nights than others, Brown clearly has untapped potential as a scorer. If he can clean up his mechanical issues as a shooter and ball-handler, he could look like an entirely different player on this end a few short years from now. Not turning 20 until October, a key element of Brown's appeal at the moment is what he could become on this end after some grooming at the NBA level.

Largely the same things about Brown's offense can be said about him defensively. He has all the tools to be successful and potentially even defend multiple positions down the road, but struggled at times with his focus off the ball and discipline defending one-on-one. He had some flashes using his strength and lateral quickness to apply ball pressure impressively around the arc and make his presence felt in the passing lanes, and is a strong rebounder, but has plenty of things to clean up on this end as well.

Brown didn't have the season some expected him to at the college level, but has outstanding physical tools and plenty of room to continue to grow as a shooter, ball-handler and perimeter defender. Despite his up and down freshman campaign, there's a strong chance Brown hears his name called somewhere from picks 3 to 8 in the upcoming draft. Given his combination of size and athleticism, his success from that point will largely come down to how quickly his skill level comes around in the environment he's drafted into.
Read full article

Mike Schmitz
@Mike_Schmitz
Mike Schmitz kicks off our coverage of the top NBA prospects in the Pac-12 with a video scouting report of the #1 prospect in the conference, Cal's Jaylen Brown.

The highly-touted uncommitted recruit was very underwhelming for the US Team. Brown threw down a monster dunk in transition and did a nice job attacking the rim when he was on the floor but he missed his only spot three and threw up some questionable shots in the lane. Brown has the prototypical NBA wing physical tools and a nice skill set to go with it, but like the rest of his teammates, he struggled against the World Team's size and length on the interior.
Read full article

Listed as tall as 6-8 by some sources, Jaylen Brown measured in a shade smaller at 6-6.5 in shoes, but on the whole, his numbers match the official numbers he's posted at various events over the years. His closest physical comparison may be Andre Iguodala who measured 6-6.75 in shoes with a 6-11 wingspan and a 217-pound frame in 2004 at the NBA Pre-Draft Camp. Brown's frame is impressive for an incoming freshman. He may not be quite as powerfully built as a Ron Artest or Stanley Johnson, but stacks up favorably with players like Caron Butler and Shabazz Muhammad. The first measurement we had on Brown put him at 194 pounds three years ago, and since then he's added nearly 30 pounds to his frame.
Read full article

DraftExpress
@DraftExpress
Many feel that Jaylen Brown is the most talented player in high school basketball, and nothing about his USA Basketball measurements this past June will discourage that. Brown measured a terrific 6-6 ½ without shoes, giving him ample size for a NBA small forward, to go along with a 6-11 ½ wingspan. He also weighs 217 pounds.
Read full article

Strengths:
-Good size for a wing player at around 6-7
-Strong frame. Solid wingspan
-Excellent athlete
-Powerful first step. Plays above the rim with ease
-Has good shooting mechanics even if he sees inconsistent results from outside
-Capable of making shots with his feet set or off the dribble
-Attacks the rim with both hands
-Outstanding in transition
-Gets to the free throw line prolifically
-Doesn't settle for jumpers even though he can make them
-Enjoys taking contact at the rim, doesn't shy away from a hit
-Great potential defensively
-Moves feet extremely well. Does a good job staying in front of opponents
-Shows good timing as a shot-blocker
-Gets in the passing lanes regularly
-Prolific rebounder
-Unselfish player, makes the extra pass
-Plays with a chip on his shoulder. Always in attack mode
-Has terrific intangibles off the court. Very intelligent

Weaknesses:
-Jump-shot is still a work in progress. Was a non-shooter not too long ago and is still finding his consistency
-Sometimes tries to do a little too much and forces issue, causing turnovers
-Still working on his ball-handling skills. Needs to improve his left hand

Outlook: Physically gifted prospect with a great combination of toughness, athleticism and smarts. Not consistent with his offensive game yet, but shows the makings of a versatile skill-set, including the ability to create his own shot and punish defenses from the perimeter. After a strong summer is starting to get consideration for potentially being the #1 prospect in his high school class.
Read full article

Jonathan Givony
@DraftExpress
Jaylen Brown may not be quite as highly touted as Maker, but the consensus top-10 2015 recruit has the making of a high level talent in his own right. Scoring 15 points on 3/10 shooting from the field and 6/11 from the line, Brown is a small forward in the mold of 2014 recruit and Arizona commit Stanley Johnson. Though not quite as strong as Johnson, Brown boasts the physical maturity, high-level strength, explosiveness, and competitive streak that helped propel Johnson up the rankings late in his career.

The 2nd leading scorer in the adidas Gauntlet averaging 23.4 points per-game for Georgia-based Game Elite, Brown uses his physical tools first and foremost to attack the rim. An aggressive slasher in the half court and a highlight waiting to happen in transition, Brown runs the floor, takes the ball strong to the rim, and seeks out contact, as evidenced by the 11 free throws he drew today. Possessing solid shooting mechanics and showing a willingness to make the extra pass, Brown has a tremendously promising skill set offensively.

Defensively, Brown's athleticism and motor, coupled with great timing on his rotations, make him a capable shot blocker and a solid rebounder. Swatting away 4 shots today, Brown is not shy about challenging scorers at the rim in a setting as competitive as this one. As he matures, Brown has tremendous potential on this side of the floor as well.

Holding offers from well over a dozen of the country's elite programs, Brown has his choice of suitors at the college level and has obvious one-and-done potential. A well-rounded, smart player, Brown is a player scouts will be watching very, very closely in the coming days.
Read full article